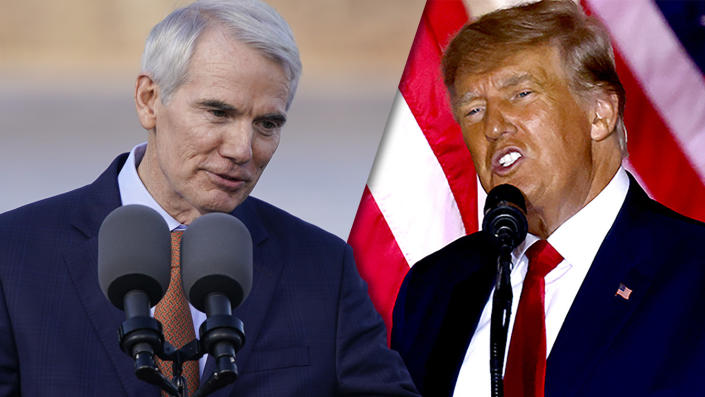 When Rob Portman announced his retirement from the Senate two years ago, it was taken as a sign that Congress was going to shit.

Portman, an Ohio Republican, knew how Washington worked—or should work—to meet national challenges, and grew increasingly annoyed that it didn’t.

Two years later, there is a hint of regret in Portman’s description of the time, in which he acknowledged surprise at the productivity of Congress in his final months.

“I felt the urge to be home more, and I became more frustrated with the inability to get things done,” Portman said of his decision to leave in an interview with Yahoo News. “Now, having said that, we’ve done a lot over the last few years. I have acknowledged that. But when I made my decision… it was less likely that those things would have happened.

Indeed, in 2021, Portman was part of bipartisan negotiations on a massive infrastructure bill that poured more than $1 trillion into roads, ports and the U.S. energy grid.

And then, in 2022, he was once again in the middle of a group of Republican and Democratic senators collaborating on changes to the Electoral Count Act that made it more difficult to overturn election results. He also worked to pass a law recognizing same-sex marriages, which included provisions to address conservatives’ concerns about religious freedom.

Portman also partnered with Democrats last year to provide $52 billion to the domestic semiconductor industry, a vital step to keep the US competitive with China.

And he worked with Sen. Ben Cardin, D-Md., on more changes to help Americans invest larger amounts in their retirement accounts.

The infrastructure bill — criticized by some Republicans as largely wasteful spending — was “not exactly conservative or liberal,” Portman said. “It’s just common sense.

“We are at a point in our political life where we need to figure out how to get back in the middle. And I don’t even mean that ideologically,’ he said. “I mean, just to get things done. And social media pushes us to the limit, because people are increasingly going right or left down a rabbit hole.

“I think an awakening is needed among the big middle [of voters]Portman said. He said he is about to announce agreements with a DC think tank and an Ohio university to continue working on political and public policy projects.

Portman was not as optimistic as others on the right about the recent skirmishes that erupted during the House of Representatives elections. He said he was concerned that House Republicans who opposed eventual Speaker Kevin McCarthy for several days learned the lesson that they could be rewarded in the future by refusing to compromise.

“I think it’s good that the Freedom Caucus is using policy tools,” Portman said of the right-wing group of House Republicans that forced numerous concessions from McCarthy in the leadership race. “But it’s not good to delay the process if you don’t get exactly what you want. That’s not how it works. You need to find common ground.

“To the extent that it rewards individuals more — not to find that way forward, but to be an outlier — it makes the hard work of democracy more difficult,” he said.

Portman is an old-school Republican, having served as a White House trade representative and budget chief in the George W. Bush administration. But he never really distanced himself from Donald Trump as some might have expected. He voted against impeaching the then-President in 2020 and again in 2021, following the January 6 Capitol uprising.

But Portman said he doesn’t think Trump will be the 2024 Republican presidential nominee.

“I don’t think he’ll eventually run. I think he said he was running because he wanted to test the waters and I’m sure he likes the attention,” Portman said. “But I think he’ll find it’s not in his best interest to run at the end.”

Portman noted that Trump was falling behind Florida Governor Ron DeSantis in some public polls. Even if DeSantis lost steam, Portman doesn’t think Trump will benefit. “And it will probably be someone else after DeSantis,” he said.

“I strongly supported Donald Trump’s policies for the most part,” Portman said, referring to the 2017 tax reform bill and the Trump administration’s development and distribution of the COVID-19 vaccine.

“But the vast majority of Republicans, when asked if he should run again, the numbers are much lower,” he said. “And I know he’s watching it [polling data]. So I think he probably won’t run at the end of the day.

One of Portman’s last negotiations was on the Respect for Marriage Act, a bill that strengthened legal protections for same-sex couples. It also included provisions to strengthen religious freedom for conservatives.

Portman led negotiations on the bill. It was the latest step in an evolution in this field that started for him in 2011 when his son Will told his father that he was gay. In 2013, Portman announced that he had changed his stance on same-sex marriage from opposition to support. He was the first Republican senator to do so.

“I’ve thought about it a lot,” Portman said. “It’s been a journey for me.”

Portman served as a member of the United States House of Representatives in the 1990s and voted for the Defense of Marriage Act (DOMA), which stated that marriage was between a man and a woman, discriminated against same-sex couples, and was signed into law by then-President Bill Clinton. DOMA was repealed by the Respect for Marriage Act which helped Portman pass.

“Having experienced this in our own family, this is who people are,” Portman said. “And you have to respect people for who they are.

“And I know others were not on board and were very much against it. And I heard from them, and I still hear from them. But I think they are fighting a battle that belongs to the past,” he said. “And looking to the future, I think it’s a matter of protecting religious freedom in the context of allowing people to be who they are.”