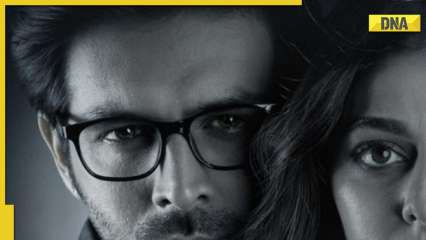 On Wednesday, Kartik Aaryan introduced his fans to his Kainaaz obsession in his upcoming crime thriller Freddy. He took to Instagram and revealed his obsession in film. He shared the look and wrote, “Meet Freddy’s Obsession – Kainaaz alayaf.”

As the teaser showed Kartik as the lonely, naive, nervous, honest, introverted, shy dentist among many more qualities of the actor’s character. During the day he sees patients treated in a clinic. At night, he turns into a killer as he drags a body into the woods. In this monochromatic poster, Alaya F appears to be his new target.

Alaya’s half face is revealed in the poster. Kartik was seen with an intense look with a blood stain on his hand. On the other hand, Alaya looks scared and shocked. Recently, the crime thriller Freddy released its first song on YouTube.

The song, titled Kaala Jaadu, is accompanied by a well-choreographed music video featuring Kartik dressed in a tuxedo surrounded by a number of masked girls in black dresses. the preparation for the role also had to be done physically and mentally. The character helped me explore a different side of my craft and encouraged me to challenge my abilities as an actor every step of the way. The first time I got a chance to see the dark side of me. I’m happy to be a part of Freddy and I’m curious to see the audience’s reaction to the film.”

Alaya said, “I was really excited to be a part of Freddy as soon as I heard the story. Kainaaz was a challenging character for me, I had to learn and unlearn a lot of things to get into the character. I am so grateful for this opportunity It has helped me broaden my horizons and it has also enabled me to discover a whole new side of myself. With Kartik, Shashanka Sir and all the other members of the team, I couldn’t have wished for a better experience!” Aided by Shashanka Ghosh, Freddy will be released on Disney+ Hotstar on December 2.

See also  Meet Karan Mehta, Who Will Make His Debut Opposite Alaya F In Almost Pyaar With DJ Mohabbat