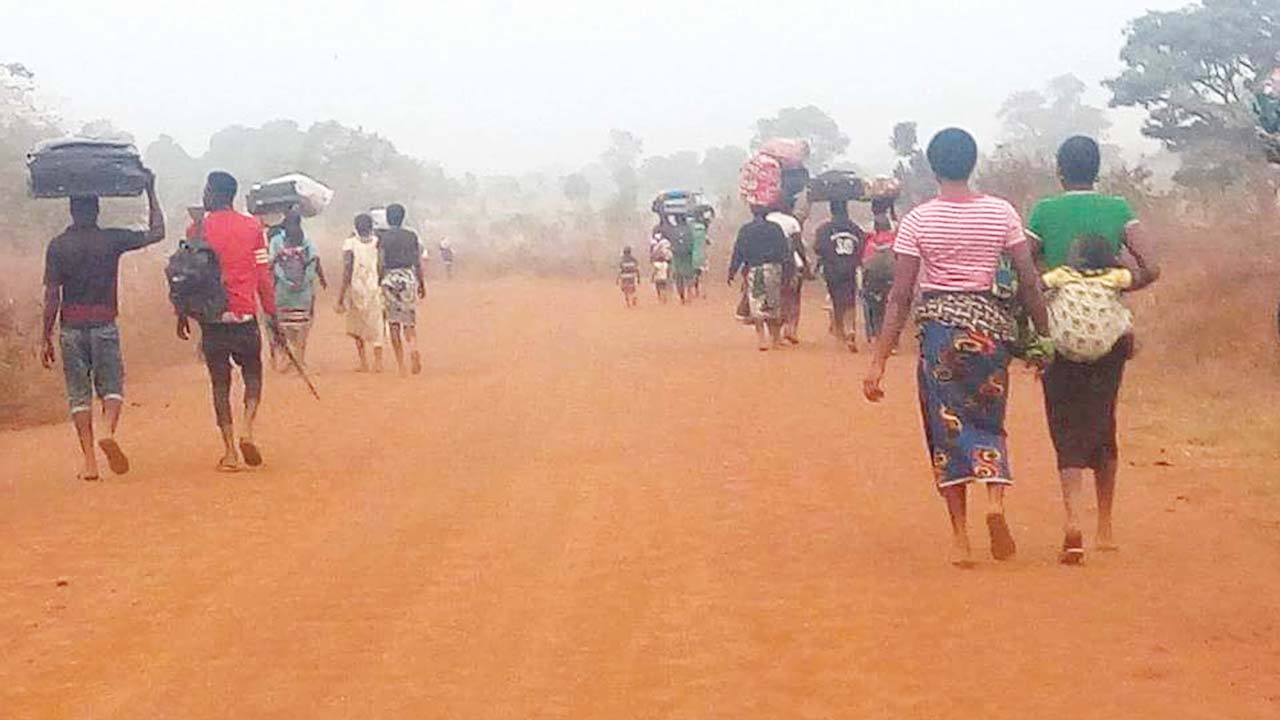 From Zaki-biam to Agatu, from Apa to Katsinala, from Gwer to Konshisha, from Ogbadibo to Makurdi and from the logo to Oju, blood is circulating everywhere. Benue State has been enveloped in wars. And wars come both from within and from without.

It was like the late reggae maestro Bob Marley had in mind Benue State when he released one of his hit songs in the ’80s, “until the philosophy that runs the race of the man is insignificant than the color of his eyes, we said war… everywhere. is war… ”. Although its target was human inequality, the song captured the ugly situation in which Benue State is now trapped.

Human lives are foolishly wasted and property destroyed as peace and tranquility seem to have taken flight. The holiness of life has been obscured. Everywhere weep, tears roll down our cheeks uncontrollably with gnashing of teeth.

As it is, we’re like Peter Tosh’s Down Presser man. Where are we going? Like he said, “you run to the rock [Aso Rock], the rock will melt. You run to the sea [IDP camp], the sea will boil. Do we use self-help as advocated by some protagonists sometimes? The state is running in a grim situation.

Barely a day in the past few months had people not been murdered in a cruel and gruesome manner in the state. These murders undoubtedly have multiple sources. They were either orchestrated by Fulani shepherds or militiamen, or sectarians or kidnappers, or interethnic or intraethnic conflicts.

Last month, Benue State Governor Dr Samuel Ortom was attacked by suspected Fulani terrorists. We politicized the attack and made fun of him for his use of onomatopoeia to tell how soft he was with hovering bullets.

This attack should have woken us up to the sad reality that the marauders were back in their war trenches, but we glossed over it.

And in the early hours of April 27, 2021, these daring devils visited the internally displaced persons camp in Abagena and slaughtered seven.

A few weeks ago, a community developer Dr Terkura Suswam was sent to the afterlife in Anyiim by unknown gunmen. A few days later, a Reverend Father was killed somewhere in Katsina-Ala. Ditto for about 50 other people who were killed in Tor Donga by suspected militiamen whose mission and objectives so far are still shrouded in secrecy.

I was in Katsina-ala and other important towns of Benue North East a few weeks ago and I can tell you for free that the situation in the Sankera axis was no different from what was possible. in northeastern Nigeria. The only difference is that, while Boko Haram has been identified and labeled as a terrorist group, the Katsina – ala militia has yet to be labeled as such despite the fact that their modus operandi appears to be similar.

As it stands, the distinction between Sankera’s guerrillas and terrorism is very thin and therefore a pragmatic effort must be made to erase this threat from our territory.

Although I do not call them terrorists, this discussion will be incomplete if I do not focus on the concept of terrorism, albeit symbolically. Terrorism according to Sage Library of International Relations GLOBAL TERRORISM volume 1, edited by Brenda J. Lutz and James M. Lutz (2008, p. Xxi) involves political goals and motives. He is violent or threatened with violence. It is designed to generate fear in a target audience that extends beyond the immediate victims of violence. The violence is carried out by an identifiable organization (like Boko Haram in Nigeria).

Likewise, Okpoko (2014) gave the etymology of terrorism as emanating from the French word terrosime, from Latin: terror, “great fear”, “fright” linked to the Latin verb terrere, “frighten” (p.26). The cimbricus terror was a panic and state of emergency in Rome in response to the approach of the warriors of the Cimbri tribe in 105 BC.

The French National Convention declared in September 1793 that “terror is the order of the day”. The period 1793-94 was called La Terreur (reign of terror). Maximilien Robespierre, leader of the French Revolution, proclaimed in 1794 that terror was nothing other than justice, rapid, severe, inflexible. The committee of public security officers who enforced “terror” policies were called “terrorists.”

And Fulani terrorists too have the mistaken and fallacious belief that killing innocent and defenseless citizens of Benue State as a precursor to seize their lands is right and good.

Harper’s (2007) enumeration of the concept of terrorism may be helpful here. According to the researcher, the word “terrorism” was first recorded in English-language dictionaries in 1798 as meaning “systematic use of terror as a policy”.

From the above representations of terrorism, one could draw from the fact that the activities of the local militia in Katsina-ala are gradually being clothed in the apron of terrorism.

As Katsina-ala escalates into another “ Sambisa Forest, ” a story is relentlessly circulated on social media about the community crisis between Konshisha and Oju. These same crises had unfortunately seen the annihilation of many people. Soldiers were reportedly ambushed and decimated. And, in a retaliatory attack, the military deployed their tanks, guns and warplanes and invaded some communities in Konshisha.

As a result, lives have been destroyed. Property worth millions of naira destroyed. And deserted areas for fear of being shot down by the military.

In a civilized climate, the military will not vent their anger on innocent citizens helpless for the crimes committed by a few. They will act on intelligence gathering and fish out the perpetrators and punish them adequately. To exhaust the whole community for a crime committed by a few is to say the least an anachronistic, jejune, primitive and barbaric strategy which is no longer in vogue.

Examples abound. When it was discovered that Osama Bin Laden was behind the 9/11 attack on the Twin Tower, the US military took the time to exterminate him. They did the same as Iranian General Suleimani when they believed he was behind several terrorist activities in the Middle East. They did not punish their entire community. Our military must adopt new strategies to isolate suspected criminals from innocent people. The military should have known that we are not in a state of saturnalia where violence could be unleashed freely on defenseless people.

But what must we do to quell this unnecessary war? It seems to me that we all have a role to play in anchoring the elusive peace on our land. We can own strategies from inside and outside. One of the strategies that comes to mind is the use of diplomacy. Everyone here should volunteer to be a harbinger of peace. We must not leave it to those affected by this heinous crisis alone to tackle it. They may not be emotionally stable to think about the exit.

Sometimes Otukpo, the tradopolitical capital of the Idoma nation was shrouded in a cult-orchestrated bloodbath. The killings were so horrific that they became everyone’s concern. The Otukpo District Traditional Council headed by Och’Otukpo Odu, Dr. John Eimoine toured his entire chiefdom and organized against worship in his area. He cursed at cult practitioners in his country. The self-defense group led by Major Enokela Ukwenya and the Otukpo National Defense joined forces with the traditional council to fight nuisance. And the fight against the cult had the full Imprimatur of the Executive Chairman of the Otukpo Local Government Council, Chief George Alli.

However, the most interesting part was the voluntary efforts of a group of young men and women who finally provided the necessary reprieve. These young people started a non-governmental organization (NGO) known as the “Do Care Foundation”. Led by Chris Oga, the organization was endowed with patriotic members such as Alhaji Illiya Hassan, Sam Agebe, Versace Agida, Ene Yusuf, Susan Oonye Ameh among others.

READ  The United States calls on Mexico to investigate allegations of labor violations at a GM facility.

Their goal was simply to quench or minimize the irritation of the cult in Otukpo and its environs.

This group has taken on the difficult task of advocacy. They traveled to every nook and cranny of Otukpo preaching in denunciation of the cult. They explored all the learning institutions in the southern senatorial district of Benue and exposed young boys and girls to the evil of worship.

At the end, the leadership of the “ Do Care Foundation ” after identifying the main protagonists of the different sects organized a friendly football tournament to consolidate their relationship in such a way that if the participants were really members, there was no will not need to kill. anybody.

I was invited to the tournament and one or two of the various advocacy tours where I persuasively sketched the evil of worship and urged them to avoid worship for their own personal good. I also kicked off the match. And today, the cult seems to be disappearing from Otukpo.

But while it appears that bigotry is on the wane in the tradopolitical capital of the Idoma nation, other incidental crimes are gradually gaining currency in South Benue. There have been several unresolved cases of kidnapping, kidnapping of schoolchildren and armed robberies. The strangest thing was the kidnapping of three sibling pupils from the army children’s school, Otukpo, who were returning from school. Thank goodness they were found and reunited with their parents in Olena.

I firmly believe that while the strategies employed by the Chairman of the Otukpo Local Government Council, George Alli, the Supreme Chief of the Otukpo Chiefdom, Dr John Eimone, the Founder of the Do Care Foundation, Chris Ogah and his team, are adopted and used, it might help in Sankera’s case.