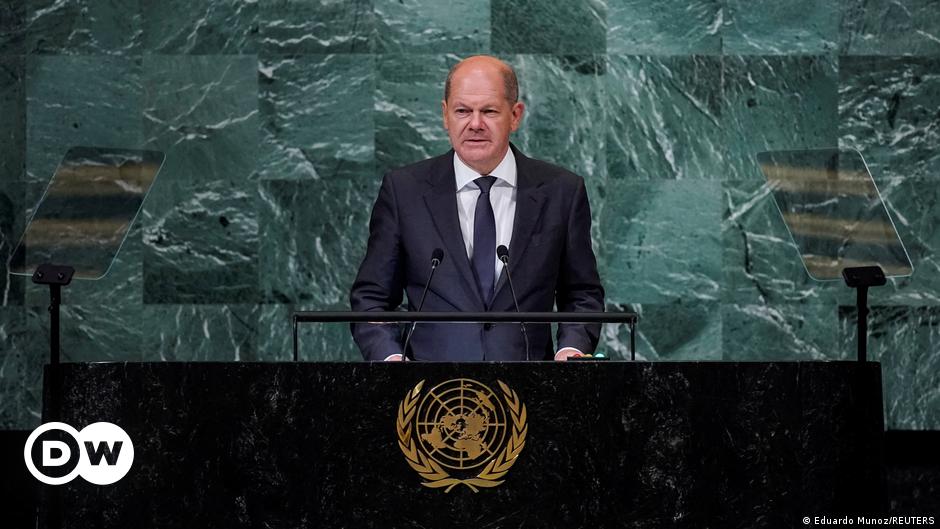 Scholz fiercely criticized the Russian invasion of Ukraine and rejected Putin’s motivation behind the war. “There is no justification whatsoever for the Russian occupation war against Ukraine. President Putin is waging this war with a single goal: to take Ukraine.”

He further appealed to UN member states not to remain neutral in the situation, emphasizing Russia’s nuclear weapons.

“We should not stand idly by as a major nuclear power armed to the teeth – a founding member of the United Nations and no less a permanent member of the UN Security Council – tries to push boundaries through the use of force,” Scholz said. during his speech.

Protection of the international order

The German chancellor repeatedly emphasized the importance of maintaining a rules-based world order.

“The alternative to a rules-based world is the rule of the strong over the weak,” Scholz warned. “The return of imperialism is not only a disaster for Europe, but also a disaster for our global peace order,” he added.

He said that with the war, Putin risks destroying not only Ukraine, but also his own country.

Scholz went on to say that a multipolar world was “the antithesis of imperialism and neocolonialism”, and that these principles should be adhered to by all UN member states. “And that’s why it was so important that here in this room 141 countries categorically condemn the Russian occupation war,” he added.

He also denounced the idea that Russia would hold referendums in parts of Ukraine. “Putin will only give up his war and his imperialist ambitions if he realizes he cannot win.”

A global shield against climate risks

The German chancellor called climate change the biggest challenge of this generation and reiterated that Germany and other industrialized countries have a special responsibility to tackle the problem and stand behind the developing countries that must deal with the effects of climate change.

“We will not abandon the countries most affected by loss and damage from climate change,” Scholz assured.

He further announced a global shield against climate risks, but did not add any details about what this might entail.

Reform of the UN Security Council

The German chancellor called for reform of the UN Security Council and suggested that Germany become a permanent member and take more responsibility within the institution.

Scholz also called for more cooperation with developing countries from the South, such as in Asia, Latin America and Africa.

The German chancellor denounced human rights violations in North Korea, Belarus and Syria, and the Taliban’s violations in Afghanistan, along with Putin’s apparent war crimes in Ukraine. He stressed the importance of not standing idly by when it comes to such violations.

He also referred to the alleged human rights violations of the Uyghurs by China and stated that the country would follow the recommendations of the UN Commission on Human Rights to the point.

Institutions need to be reformed to adapt to the realities of the 21st century, he said, calling more cooperation, more partnership and more involvement the only reasonable response to tackling global challenges.