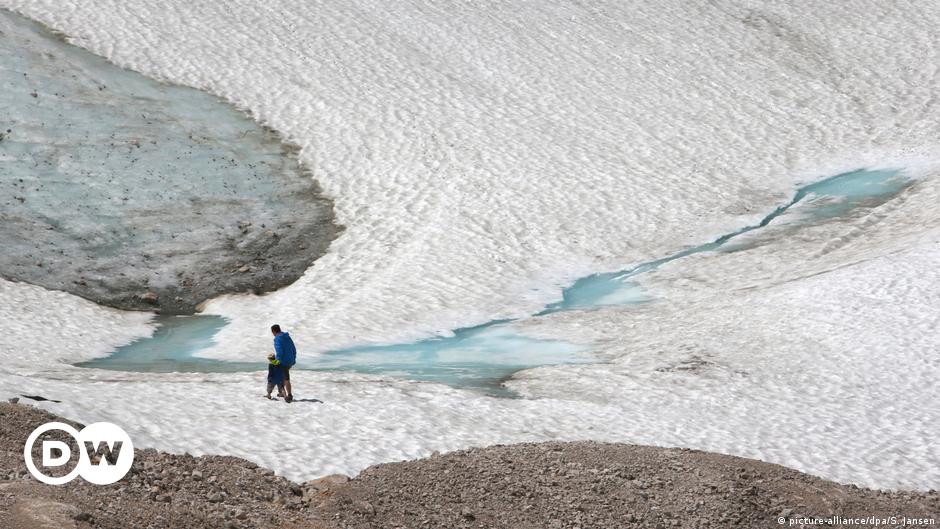 Glaciologist Christoph Mayer said Bavaria’s five glaciers – combined – had already shrunk to just half a square kilometer (124 acres) of ice – the equivalent of 36 football fields and 88% less compared to their status circa 1850.

Although minimal, their fate as climate indicators was “of great importance,” Mayer said.

The Bavarian Academy of Sciences study, its second on local glaciers since 2012, emerged when the German Constitutional Court ruled on Thursday that the national climate law was insufficient to protect future generations beyond 2030 .

Among the doomed remains of ice, the study found, were the two Schneeferner glaciers bordering Germany’s highest peak, the Zugspitze, with its more rugged northern sheet spewing 250 liters of meltwater every 30 seconds.

“The last Alpine glacier in Bavaria could disappear in just 10 years,” said Environment Minister Thorsten Glauber of the Free Voters’ Party, the junior partner of the coalition cabinet of Bavarian Prime Minister Markus Söder in Munich, adding that the glaciers were melting faster than expected.

The Bavarian study coincided with a global study, published this week in the journal Nature, showing that 220,000 glaciers lose 31% more snow and ice per year than they did 15 years earlier, causing permafrost loss. landslides.

Already, glaciers were responsible for 21% of sea level rise – melting ice caps across Greenland and Antarctica are ruled out, study finds, six months before next UN conference on climate, COP26, in Glasgow.

This accelerated glacial melt of 298 billion tonnes of ice and snow per year is equivalent to submerging Switzerland under 7.2 meters (24 feet) of water each year, said Zurich glaciologist Romain Hugonnet.

Half of that glacial loss came from the United States and Canada, with Alaska melting “among the highest on the planet,” say the authors of the Nature article edited by Hugonnet of ETH University. from Zurich.

Even the glaciers of the Tibetan Plateau have been affected, affecting millions of people who obtain water downstream daily, according to the study.

The merger reflected “the overall increase in temperature” caused by the burning of coal, oil and gas, Hugonnet said.

“Rising sea levels are going to be an increasingly serious problem in the 21st century,” warned Mark Serreze, director of the US Snow and Ice Data Center, which makes extensive use of satellite observation tools.