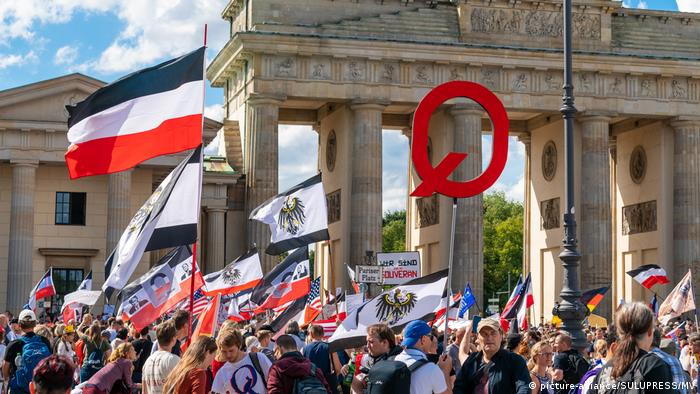 The German Federal Office for the Protection of the Constitution (BfV) said on Wednesday it would keep parts of the anti-coronavirus lockdown movement under surveillance.

The BfV said elements in the so-called Querdenker (lateral thinking) group were of particular concern because they questioned the legitimacy of the state.

A new category of concern

Domestic intelligence officials have said they fear information released during the pandemic will continue to spread even after it has ended.

The movement does not fit into pre-existing categories of concern – such as the far right, the far left or the Islamist – but a new category, the BfV said.

For this reason, the German Interior Ministry said it had created a new category of “state delegitimization where relevant for constitutional protection”.

This new categorization would allow the cases to be treated both as alleged crimes and as proven extremist efforts, the ministry said.

He added that the decision was made because protests against Germany’s lockdown measures had been repeatedly used in provocative ways to escalate tensions.

The organizers, in particular those of the Querdenker movement, had “to some extent made it clear that their agenda goes beyond mere mobilization to protest against the state’s protective measures against coronaviruses.”

Links to the far right

Authorities also cited links between the Querdenker movement and far-right Reichsbürger and individualist Selbstverwalter groups. Members of both consider themselves not to be subject to the laws of the German state.

READ  Australia backs down on 'racist' India ban after backlash

The Central Council of Jews in Germany welcomed the move, saying it had become “urgent” given the influence of the far right in the protest movement.

“This development must be stopped at all costs,” said Chairman of the Board, Josef Schuster.

Observers say radical conspiracy theories and far-right groups have become increasingly influential among those taking part in the protests.

Interior Minister Horst Seehofer said in mid-April that he expected such a step. “We have focused heavily on this scene from the start. We take a close look at the participants and their behavior,” he explained.

Some state authorities responsible for protecting the constitution, such as in Bavaria and Baden-Württemberg, have already placed all or part of the Querdenker movement under observation.