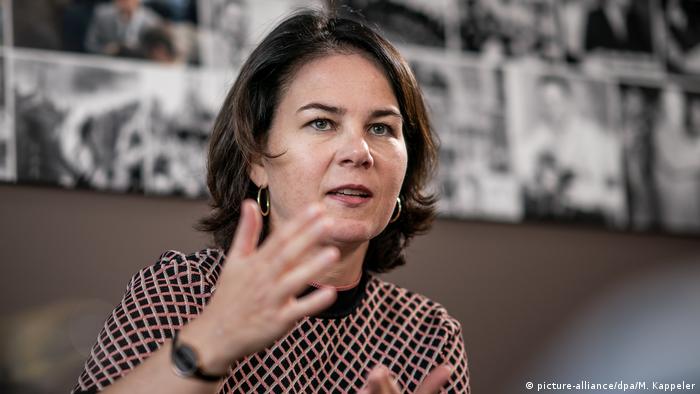 The tide is turning against the German Green party. Only seven and a half weeks ago the future looked rosy for the Greens. Annalena Baerbock — their young and dynamic party co-leader — had just been announced as their first candidate for chancellor. The party rose in national polls to almost 30 percent and at times even overtook the CDU and its leader Armin Laschet. The chancellorship seemed within reach for the first time in the Greens’ history.

But a lot has happened since, and the party’s campaign is faltering. The latest “Deutschlandtrend” monthly survey by pollster Infratest dimap puts the Green party at 20% voter support well behind the CDU’s 28. Support for Annalena Baerbock has plummeted by 12% putting her behind her competitors, with the Christian Democratic Union’s Armin Laschet — who had been trailing for weeks — taking the lead.

This weekend the Greens will meet for a digital party conference to agree on their election program. They will also officially nominate Baerbock as the candidate for the chancellorship by a resolution of the party conference.

She and the party need to bounce back after their poor showing in last Sunday’s regional election in the eastern state of Saxony-Anhalt the Greens received a disastrous just 5.9% of the vote, confirming that the Green party is not attractive for a rural east German electorate. The Green party’s success is in the west of the country and in urban areas but has failed in the region that used to be the communist East German GDR. That region has become the, is the stronghold of the far-right AfD.

Baerbock nonetheless wants to stay positive, saying on Sunday that “one thing is clear for us: the starting point for the national election is completely different. After the pandemic, it has to be about revitalizing this country together. That is why we are running as Alliance 90/The Greens.”

Battle over the election program

Since its founding 40 years ago, the Green party conferences have been famous for their heated debates. Since Habeck and Baerbock took the lead in 2018 observers were surprised to witness carefully choreographed glossed-over events. The Greens have turned mainstream, wrote the commentators.

The days of harmony may be over now. Climate protection will once again be at the center of the party conference. But grassroots activists risked derailing proceedings by initially submitted over 3,300 amendments to the election program. Now only 20 of them are left. The words “Germany. Everything is in it” run across the program. But the requests for amendments start with the title. 300 party members have called for deleting the word “Germany,” arguing that the program should not be labeled as a national one, but rather as a program for a country in a globalized world.

This was met with scathing attacks from the domestic conservative press. The Greens want their chancellor candidate to run the country, but won’t even acknowledge it by name?  The far-right which wants to curb immigration is diametrically opposed to the Green party’s multicultural integration platform.

At the party conference, the Green party leadership must be careful that ever-rebellious grassroots activists don’t write unachievable goals into the election program.

The Greens are already calling for a 70 percent reduction in greenhouse gases from their 1990 level by 2030. A large group of grassroots representatives wants that changed to 85 percent.

Even the 65 percent promised by the current government will only be achieved with maximum effort. The draft of the election program also calls for a speed limit of 130 kilometers per hour for the Autobahn. The grassroots activists want that cut to 100 kilometers per hour. Baerbock knows that these demands will not be received well by a majority of Germany’s car-loving population. But she thinks it is good that the party continues to place its focus on climate protection.

Suggestions like a hefty gas price hike have not gone down well with all voters last week.

Their political opponents accuse the Greens as going over the top with restrictions and regulations and curbs to individual freedom and civil liberties. And they are waiting to pounce on some radical demand. In the 2017 general election campaign, the Green party suggested introducing one mandatory “vegetarian meal day” in German schools. This “veggie day” proposal triggered an outcry and became synonymous with unjustifiable overregulation – a deadly blow to a Green party trying to take the center.

One topic certain to be debated at the conference is the trip to Ukraine of the co-head of the party Robert Habeck. In Ukraine Habeck expressed support for sending weapons to Ukraine – to be used in self-defense. He said this despite the fact that the Greens’ election program states: “we strongly support civilian crisis prevention and want to use restrictive export controls to end European arms exports to war and crisis zones as well as to autocrats.” Later Habeck claimed he meant demining equipment.

The other parties criticized Habeck for his naiveté in foreign policy.

Baerbock herself has also been under fire after she was forced to admit she had not initially paid tax on more than 20,000€ ($24,000)  Euro she received as a Christmas bonus from the party. She now has. Journalists also found false information in her resume, including claims that she was a member of organizations such as the respected German Marshall Fund.

As the stakes have piled up Baerbock and the Greens have seen their star falling and their dream of leading a government for the first time possibly disappearing. The Greens are now trailing the CDU by 6% to 8% depending on opinion pollsters.

There are still over a hundred days before the election, but Baerbock needs to come out of the gates running after the conference with her party firmly behind her. If the fringe hijacks the election platform it will be interpreted as another failure on her part, and open her up to fresh attacks.

But if she can steer the party through the conference and manage to bring it together around her she will not only restore her political momentum but demonstrate her skill as a politician — exactly what has been in question in recent weeks.

While you’re here: Every Tuesday, UKTN editors round up what is happening in German politics and society, with an eye toward understanding this year’s elections and beyond. You can sign up here for the weekly email newsletter Berlin Briefing, to stay on top of developments as Germany enters the post-Merkel era.