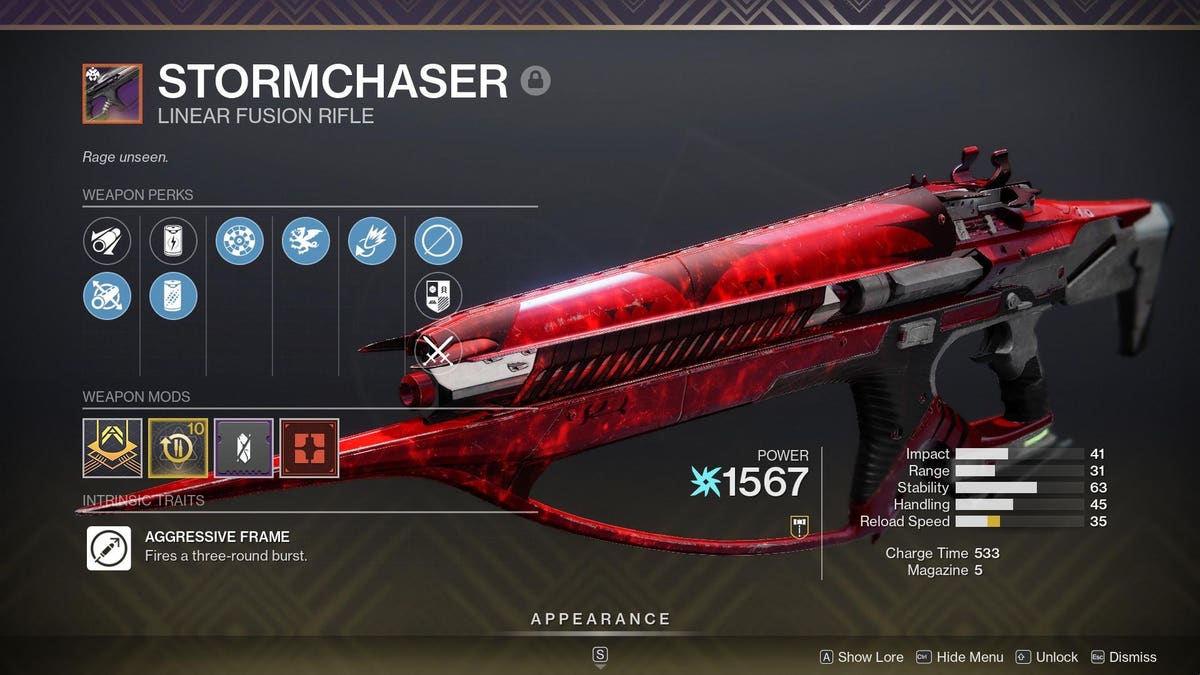 Well, I have news for you. Bungie has absolutely seen your triple Stormchaser in a Caiatl phase before, and they’re going to do what they’re going to do regardless of me. But your average gamer might not know the glory of Stormchaser, so I want to make sure everyone gets their hands on this thing before it’s probably is nerfed at some point in the future. But hopefully it lasts as long as this current season, at least.

Stormchaser is a new Linear Arc Fusion Rifle from the Duality Dungeon, with a twist. The difference being that it’s the only “aggressive frame” three-burst linear fusion in the game. And as a result, not only does it do around 40% more damage than a normal linear fusion with the same perks, but it actually outclasses all other Legendaries and Exotics in the Heavy Slot by quite a large margin, aside from a very, very specific roll on another weapon.

I will turn to my friend Chevy, who did the tests that show just how crazy Stormchaser is. Here’s the DPS rank list now that Stormchaser is in the mix:

So as you can see, while the first place is technically the Vow raid linear fusion Cataclysm, you need exactly the Bait and Switch, Fourth Time is the Charm Roll to get it that high. You need to trigger Bait and Switch by landing with all three weapons, then you’ll need to hit each hit for the fourth time to trigger. Meanwhile, Stormchaser just needs Vorpal to reach that level, and you’ll regularly see over 100,000 damage per burst on a boss target. It’s… extremely crazy. Other tests show that almost every buff you can get on Stormchaser beat those same buffs on Cataclysm. Most of the time, Stormchaser is 30-40% higher:

So you want one. Where do you get it? One place, the Dungeon of Duality, but two places inside, the second and the third encounter. It doesn’t fall off the first time. The second Vault encounter is your best bet as the loot pool is smaller than the final boss, and I’ve already gotten two Vorpals with just a small amount of farming. This segment doesn’t even require a boss fight, just basically ad clearing on a timer and not messing up the bells. So yes, I would highly recommend farming for this, and even if you don’t have time to do full dungeon runs, you can A) farm these sections repeatedly, individually, now with how the game works dungeon farming and B) there are a lot of LFGs, no micro group running them all the time. The mechanics aren’t complicated enough where you actually need to talk if you have any idea what you’re doing.

I think the Stormchaser archetype, of which he is the only one, will probably end up being nerfed, so it’s not really an outlier, plus or minus a million damage above all other exotics and legendaries besides from Bait and Switch Cataclysm. But until then, buy one and go crazy, it’s awesome.