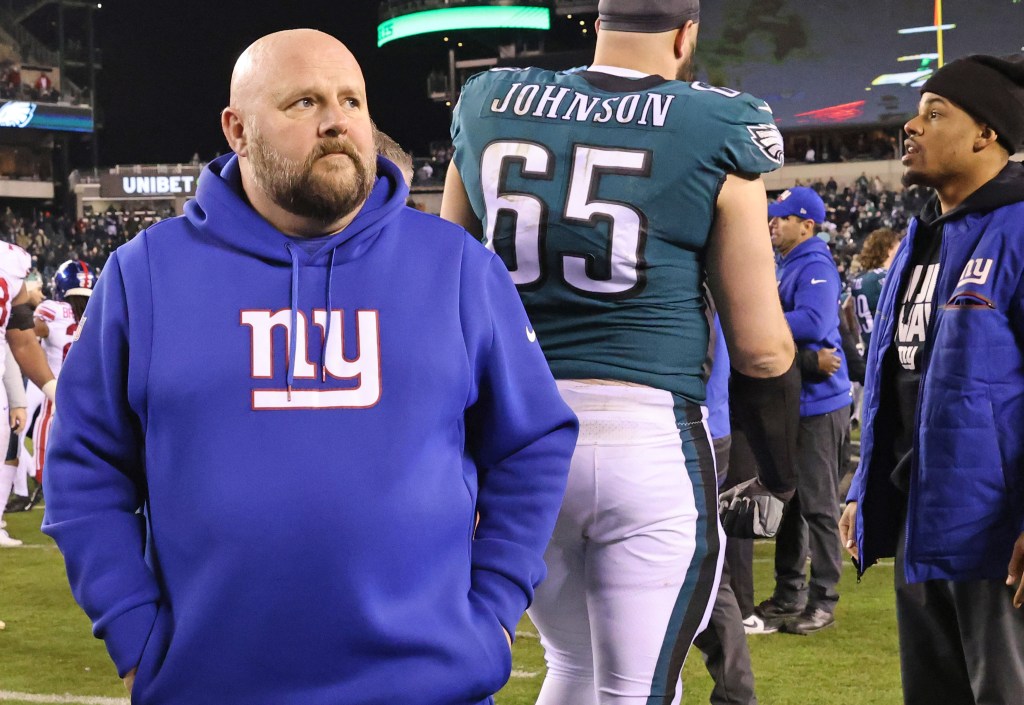 On the last day of a football season that felt like the last day of a high school semester, the Giants’ Brian Daboll finally had to admit that there are things beyond the control of a football head coach, even an outstanding football coach. even a coach who has given oxygen to a franchise and adrenaline to a fan base for the past 11 ½ months.

Even Daboll – never too boisterous after wins, never too stifled after losses – couldn’t disguise the ache in his voice and the weariness in his bones.

“I wish we could do this again next week,” he said.

The Eagles defeated the Giants 38-7 Saturday night at Lincoln Financial Field in Philadelphia, and it honestly didn’t take long for them to clear the mystery associated with the proceedings. The Eagles scored the first two times they touched the ball. They stopped the Giants trailing an early fourth, which seemed to fill Daboll’s pockets with the excess pixie dust he had been carrying all year.

Halfway through it was 28-0. The Linc was beside himself. Giants fans spent the halftime checking out what was available on Hulu and Netflix.

“A crash landing” is how Daboll described it over and over again, and there really was no better word art on this night. Flying so high into the game, the Giants finally collided with the back of a line of buses like Evel Knievel, only the buses were dressed in green Eagles uniforms.

“They did everything better than we did,” Daboll said.

They did. It was complete, it was thorough, it was a gut punch from start to finish – and it doesn’t diminish in one ounce what the Giants accomplished this year. In August, if you chose the Giants to win six games, there was a term your friends used for you: eternal optimist. And even you couldn’t get them on nine. Not even you could have imagined that they would win a playoff game for the first time in 11 years.

“It was special to be a part of it,” said quarterback Daniel Jones, and it was special to watch, from the moment Daboll flashed two fingers at the end of the Tennessee opener to the remarkable tsunami of faith that followed. follow the. the Giants down the Turnpike for this NFC divisional playoff.

The sting will linger for a day or two.

Then you remember a stolen moment: Jones trampling on the Vikings last week? Kayvon Thibodeaux loots the commanders in week 15? Saquon Barkley shows extensive examples of why he was once described as being touched “by the hand of God?” Go ahead. Choose as many as you like. There are plenty.

Soon you will, of course, start thinking about something else.

You’ll think about next season and the seasons to come, and you’ll want to think about how this season should be a building block for something better, something bigger, something lasting. General manager Joe Schoen and Daboll will no doubt have thought about that by the time you wake up Sunday morning, and there are few franchises in any sport right now whose fans trust their leadership more than Giants fans do on Schoen and Able trust.

Of course there is a world of difference, and sometimes a huge gulf, between what should happen and what happens. Daboll sounded a familiar tone to longtime New York football watchers when he said towards the end of his postgame meeting with reporters:

“You have to work really hard to get to this place,” Daboll continued. “It’s a tough place to come, this divisional round.”

At the time, Daboll sounded exactly like his spiritual antecedent had, nearly 24 years earlier. By January 1999, Bill Parcells had moved to the Jets and in two seasons had them within 30 minutes of a Super Bowl. That didn’t happen, but the moment those Jets stepped off the field at Mile High Stadium, they were christened Next Year’s Champs.

Parcells, who had seen this glove before, looked 120 years old as he leaned against a wall just outside the Jets’ locker room, his eyes hollow and his voice soft.

The Jets never got back there under Parcells. Things happen. Players get injured. Rookies don’t get out. Seasons often behave stubbornly. So the Giants know now, immediately, that there are no guarantees as to what’s next.