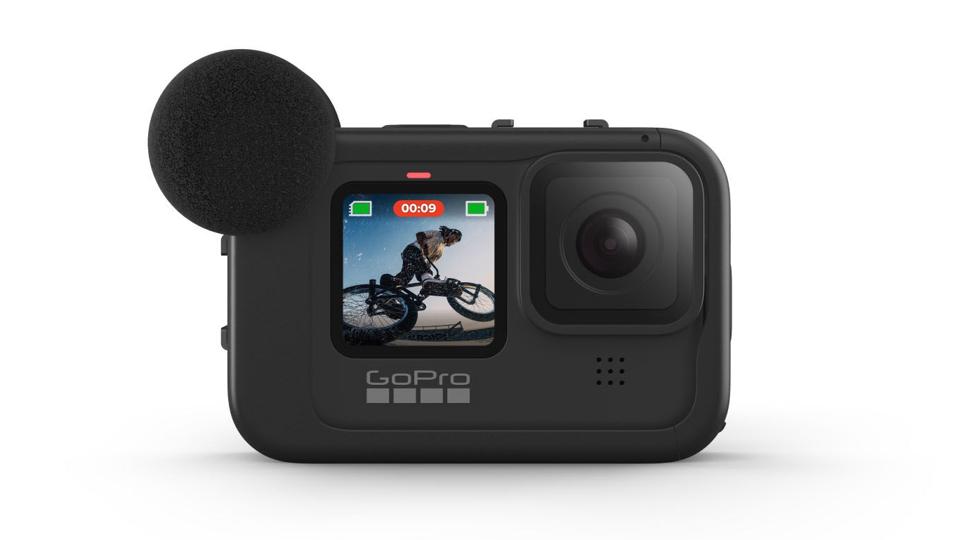 The action cameras are great. I love the idea of ​​having a little camera that can fit in my pocket and ready to go on any adventure. In the case of the Hero9 Black, this also includes excellent image stabilization and surprisingly good image quality. There are a few situations where it needs a little help, and that’s where the Media Mod comes in.

The Media Mod is a plastic case that wraps around your Hero9. They also have a version for the Hero8. There are two hot shoe mounts, mic input, HDMI output, and USB-C since the Hero9 is now covered. Most importantly, there is a built-in mic.

Here is a little closer.

The Media Mod snaps firmly onto the Hero9, once you remove the battery cover from the camera. The caseback is open, revealing the foldable mounts of the Hero9. The rubber buttons on the top and on the side press the corresponding buttons on the camera. There is a windshield included for the microphone. The plastic is quite strong, but not as strong as the Hero9 itself.

The main test, of course, is with the built-in mic. This will vary a bit depending on your environment, but in my testing I found the mic Media Mod to better showcase my vocals from the background, but with a little less weight than the mic’s. the camera. You can hear what I mean around 4:10 in the video above. The difference is quite subtle, however, and one isn’t significantly worse than the other.

What is more visible is the effect of the windshield. I didn’t have a particularly windy day during my testing, but there was enough of it that it was audible in images recorded with only the camera’s built-in microphones. It was much less noticeable on the micro Media Mod with its foam windshield attached.

The Media Mod has two of its own accessories. The first is the tiny $ 50 Light Mod, which has 10 LEDs and comes with a rubber diffusion cover. It is very bright for its size. The light is a bit cold for my taste, but there are third-party companies that sell color filters for this. Alternatively, you can get pretty much any LED light you want, as the Media Mod’s hot shoe is standard in size. I like the size of the Light Mod, however, as it doesn’t add too much to the overall bulk of the Hero9.

The other main accessory is the $ 80 Display Mod front screen. This is a 2 inch flip-up screen that connects to the HDMI output on the back of the Media Mod. Since the Hero9 already has a front-facing color LCD display, I don’t think that’s as useful as it would be with the Hero8, but it certainly gives you a better view of what the camera is actually seeing. It also frees up the camera’s built-in screen to show more readable information about your images.

The Media Mod is not for everyone. The Hero9’s microphones are quite good, so the built-in mic isn’t crucial in most situations. Low light performance is good, for an action camera, so light may not be vital for everyone either, especially if you have a phone on hand and can use their flashlight.

Having said that, the Media Mod is definitely useful in a lot of situations. The mic can help if there is a lot of ambient noise or excessive wind. In extreme cases, you can still connect a wireless mic to the mic input. For those situations where you don’t have a phone, or need a hands-free or two, being able to mount a light is very, shall we say, handy.

So in the end I feel like, like I do with most GoPro products, it’s a little more expensive than it should be, but quite useful and well thought out.

Check out my video above (also linked here) for how the mic sounds compared to others.