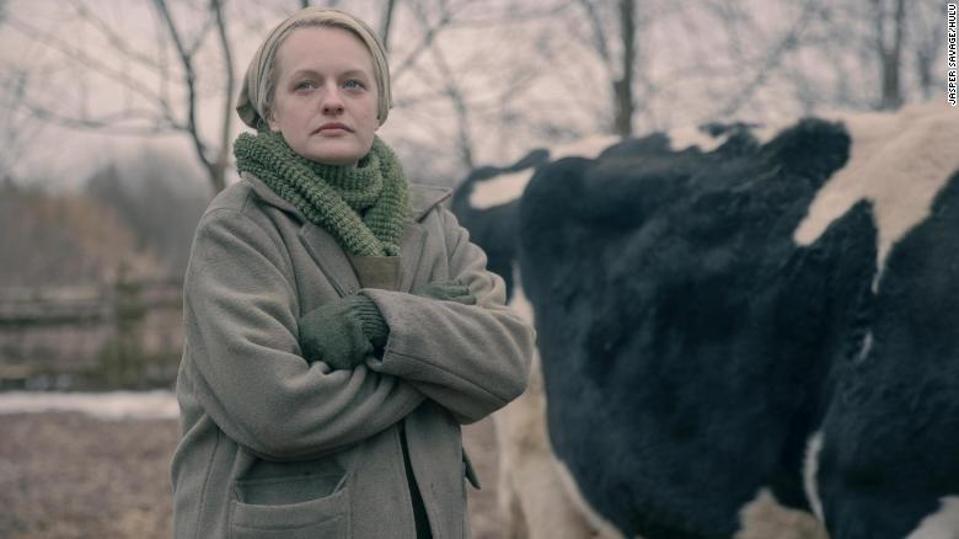 The Handmaid’s Tale The fourth season picks up exactly where the third season left off, with June (Elisabeth Moss) being shot during her successful attempt to save 86 children and a dozen Marthas from Gilead. She and her fellow maids were left behind to fight the bad guys, which they did. Now they are fugitives from the totalitarian Gilead regime, and June is bleeding.

The Season 4 premiere focuses largely on June and its countrymen heading to a safe haven where the Mayday resistance movement has taken up residence. June almost dies, and even days after their arrival, she can barely get out of bed.

She was taken in by Mrs. Keyes (Mckenna Grace) a very young wife who runs the roost on this farm now that her husband has gone senile. We cannot feel too bad for the man. It turned out that he couldn’t do it, and so instead of doing the deed himself with his child wife, he let various Guardians, Commanders, Eyes and other men of Gilead make their way with her. .

We will learn this fact sometime later in the episode. At first we don’t know what’s going on with Ms. Keyes. She tells the injured June that she dreamed of her – that she dreamed that they were both killing people together. Later, she gets angry with June for not wanting to go to war with Gilead right now. June simply asks for patience, telling the young woman that things are too hot for the moment after rescuing the children. But Mrs. Keyes will have none of that and leaves.

The young wife later forces poor Janine (Madeline Brewer) to eat pork from a pig they slaughtered that same day – a pig Janine prayed to before it was killed. Obviously, she had a connection to the pig (the episode title is even “Pigs”) although the show doesn’t do much to explain or show us what it is unfortunately.

Yet the scene of Mrs. Keyes yelling at Janine to eat the pork, then squeezing her hand over her mouth to keep her from spitting it out or throwing up, is deeply unsettling and more than a little surprising given the apparent sympathy of the daughter to their cause. . June even confronts her by telling her to have a little “respect”. That’s when Ms Keyes collapses and tells June about all the rapes and abuse she has also suffered. She collapses crying and June comforts her.

The next scene is a bit confusing. June is mad that no one is watching over Mrs. Keyes. She’s gone, I guess? June seems a little disturbed. I feel like I missed something but I know I didn’t.

It turns out that she was patrolling her land and that she and her guards came across an intruder. He’s a wandering guardian. He is drunk. He is also one of the men who raped Ms. Keyes. They tied him up and when he tries to escape the false-Marthas (the Handmaids are all disguised as Marthas for obvious reasons) come down, kick him and beat him with a shovel.

It really reminded me of the scene in Season 1 where Aunt Lydia (Ann Dowd) takes the maids to a field and has them all circle around a doomed man. They are instructed to throw stones at him and attack him and ultimately brutally kill him. I think we’re meant to be remembering that scene right now, as our heroes quickly descend to the wickedness of their captors.

The only other version of this scene I could find on YouTube was from the 1990 film adaptation of Margaret Atwood’s novel. I admit, I didn’t even know this version existed.

June tells them to stop and for a moment we wonder if she’s going to show mercy or hold a trial or something human and decent – things her captors rarely, if ever, showed her.

But no. They put it in the barn and Mrs. Keyes walks in and June hands her the mean looking knife she was carrying and says “Make mom proud”, with a weird, crazy glint in her eyes. “I will,” Ms. Keyes said. June comes out and we hear the screams.

Later, as June goes to bed, Mrs. Keyes walks in, her blue dresses drenched in blood. She asks to lie down next to June and when she does she says “I love you”. June smiles creepily and says, “I love you too, bananas.” Like in “Hannah banana” – the thing she used to say to her long-lost first child. Has June given up on finding her? Has she cracked and decided that Mrs. Keyes – now let’s call her Esther – will suffice as her attorney? Or has she convinced herself that Esther is really Hannah? It’s hard to say. June is clearly not stable at the moment.

Elsewhere, the Waterfords – who are both now in cozy prison cells – meet Mark Tuello (Sam Jaeger), the US agent who convinced Serena (Yvonne Strahovski) to betray her husband Fred (Joseph Fiennes) and escape to Canada. Serena and Fred are deeply troubled by this. It’s pretty amazing how brainwashed and awful Serena has been. You’d think she’d be happy to hear other people come out of Gilead, a place she clearly wanted to get away from. But no. She remains steadfast in her twisted beliefs. Fred is just a creep, and although he comes across as a true believer genuinely concerned about the plight of these children, we all know he is full of them.

Speaking of true believers, we have a scene with a very bruised and beaten Aunt Lydia. She is before a council of Gilead. We learn that she has been questioned for 19 days in a row in an attempt to determine whether she is guilty in the flight of the children, Marthas and maids. The council decides that she is not guilty, but that doesn’t mean that she is not at least partly responsible. When she is fired, one of the super nice guys on the board says something like “dirty maids, all worthless bitches”.

Aunt Lydia turns, a bit of that old fire in her eyes. We know that in her twisted way she wants to stand up for these women. She chastises the men in front of her, telling them that not all maids are bad – misled, but not sinful – but one of them is. One of them must be brought to justice, hung on the wall, before it causes any more problems. She has already escaped their Guardians for 19 days (how incompetent are you? she said without saying it). Aunt Lydia remains one of Gilead’s most dangerous figures, a true believer in the oppression and subjugation of her own gender.

On the flip side we have Commander Lawrence (Bradley Whiford) and Nick Blaine (Max Minghella) who end up in close quarters. Lawrence is in jail, although they were kind enough to let him keep his books (something women are not allowed to have even when they are “free” in Gilead). Nick is now a powerful commander whose reach apparently extends to this prison and the leadership of Gilead. I thought he went to Chicago to fight in the war? I may be forgetting something.

Either way, it looks like Lawrence is made for when he’s taken to a room with an ominous looking chair, but Nick has managed to get the powers in place to use Lawrence as a consultant on a possible invasion of Canada at the up – something Lawrence thinks is foolish, a missed opportunity for new peace talks and trade deals. The disturbing chair? Just a barber’s seat. Lawrence receives a cut, not a beheading.

I actually thought it was a pretty good episode of The Handmaid’s Tale. As readers of this blog know, I’ve had enough of the show lately. Season 3 has certainly had its moments and everything is produced very well, but it seems the only way for this series to be successful is to always raise the stakes. Make the violence more gruesome (remember the Handmaids with their lips sealed with metal rings) or raise the stakes (an entire plane filled with children and Marthas escapes, not just a Martha with a baby).

Luckily, this episode at least brought things back to life a bit. Esther’s shifting moods are an interesting twist in the liberation movement, and she could make a very interesting protagonist / antagonist hybrid in the future. Hope they explore the weird mom-daughter thing between June and Esther more, because it’s a twisted but compelling new relationship.

It’s also pretty revealing to see Lawrence getting off so easily when June will almost certainly be in huge trouble if she gets caught. It’s not just that it’s a man and it’s a woman. It’s that he’s a powerful man whom the state values ​​as a strategic asset, while June is nothing more than a rancher to them (albeit one with rather absurd plot armor).

I’ll say this: I want Season 4 to be about the revolution that is finally happening and some villains to finally get their appearance. I want to see Mayday or whatever band June is in with big movers and shakers in Gilead. I don’t think anyone needs another season of horrific oppression and violence. I think we all need a catharsis. I’m worried we won’t get it and that Hulu will continue to perpetuate this story forever.

What did you think of the first episode? Hulu left us with three last night, so I’m going to type in my 2nd and 3rd episode reviews today. Thanks for reading!