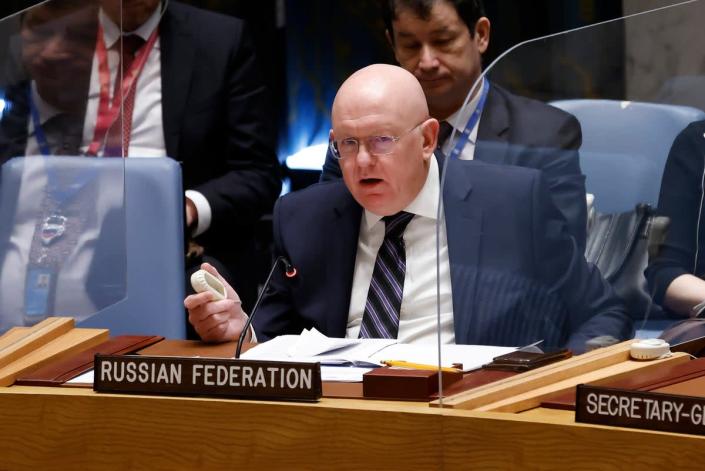 On the evening of February 23, with nearly 200,000 Russian troops massed on the border with Ukraine, the United Nations Security Council convened an emergency meeting to deal with a seemingly imminent invasion.

By the time Ukrainian Ambassador Sergiy Kyslytsya started speaking in the chamber, the war had already begun. The 52-year-old diplomat put aside his prepared speech and spoke directly to his Russian counterpart, Vassily Nebenzya, urging him to call his superiors in the Kremlin and tell them to stop the aggression against Ukraine.

“There is no purgatory for war criminals. They are going straight to hell, ambassador,” he concluded.

Thinking back to that moment now, four months into the war, Mr. Kyslytsya has no regrets about the language he used.

“I had to expose the zero level of morality of the Putin regime and its envoys around the world,” he says UKTN at the Ukrainian mission to the UN in New York. “Russians often try to project the image of being morally above the decaying collective West and everything associated with it, but that’s not true.”

The video of Mr Kyslytsya’s reprimand was widely shared in the following days, even as Russian troops began their assault. His speech, which eschewed the usual diplomatic niceties of the world body, captured the shock and anger felt not just by Ukrainians, but around the world, at the invasion.

Today, Russia continues to push its lead in Ukraine’s southeastern Donbass region. Despite its initial successes against a much larger and more sophisticated army, Ukraine is struggling to hold on.

Here at the United Nations, far from his homeland, Mr. Kyslytsya fought his own war. In his speeches to the Security Council and the General Assembly, the Kyiv native appealed to the moral conscience of his allies and shamed Putin’s representatives on the world stage.

He has frequently attacked Mr. Nebenzya, Russia’s ambassador to the UN, comparing him to Nazi diplomat Joachim von Ribbentrop. When asked what he thinks motivates his counterpart, Mr Kyslytsya is blunt.

“His situation is very miserable,” he said. “The Russian diplomatic service traditionally consists of two large blocks: they are either generations of Soviet, communist, diplomatic families, or more than half are basically representatives of the many intelligence and secret services of the Russian Federation. They have no way to freely express their opinion.

“Nebenzya himself is probably about to retire. So if he defaults and stays in the West, who is he? And what is it? He’s nobody, he wouldn’t even earn a living. So he has nothing to lose.

Does he pity the 60-year-old Russian ambassador for this unenviable position?

“It’s not about pity,” says Mr Kyslytsya. “We are witnessing such a magnitude of human drama that it is not even in my way of thinking to express pity for him. He is the spokesperson for a demon.

Mr Kyslytsya was deputy foreign minister in 2014 and held the post when Russia annexed Crimea the same year. He spent years rallying support to counter Russian aggression against Ukraine, before moving to the United States to assume his current role in February 2020, just at the start of the pandemic.

He is, however, no newcomer to the United States. Before becoming a career diplomat, Mr. Kyslytsya spent time studying in Kansas as a young man, a place he says reminded him of his homeland.

“You can travel for hours and see the yellow field of sunflowers and the blue sky, which is basically the Ukrainian national flag,” he says.

Here in New York, he used his platform to draw attention to the plight of Ukraine, often making headlines for his landmark speeches. In one, at the General Assembly in late February, Mr Kyslytsya read aloud what he said were text messages between a Russian soldier and his mother, extracted from his body’s phone after he been killed in action. In another, responding to Vladimir Putin raising the threat of nuclear war, he said of the Russian president: “What madness. If he wants to kill himself, he doesn’t need to use a nuclear arsenal. He has to do what the guy from Berlin did in a bunker in May 1945.”

He carries with him a copy of the United Nations Charter, of which he frequently reads aloud the rules and regulations that guide member countries. Citing the rules of this charter, Mr. Kyslytsya has repeatedly called for Russia to be completely banned from the Security Council.

“I often need to remind people that in my opinion, and in the opinion of many legal experts, Russia continues to illegally occupy the Soviet Union’s seat on the Security Council,” says Mr Kyslytsya , turning to a bookmarked page of the charter. .

Mr. Kyslytsya’s appeals to the conscience of the world have a practical purpose. The steady and rapid delivery of heavy weapons to repel further Russian advances is essential to Ukraine’s survival. Like all other Ukrainian diplomats around the world, Mr. Kyslytsya has made it a point to defend these deliveries.

Since 2014, the United States has pledged more than $7 billion in aid to Ukraine. In March, President Joe Biden approved an additional $13 billion in military and humanitarian aid. Weapons also poured in from the UK and European allies. But he says it didn’t come fast enough.

“Someone may have the impression that Ukraine has enough weapons, given the hype in the international media. It’s not true. And that’s basically why we still can’t turn the tide,” he said.

“The Russians cannot advance, but every day we lose up to a hundred soldiers and up to 500 wounded. The balance sheet is therefore very high. And if our allies do not speed up the supply of the necessary weapons, we will see more bloodshed on the front lines.

The front, at present, does not move much in either direction. Fighting in the Donbass in recent weeks has been characterized by long-range artillery combat. According to Ukrainian Deputy Defense Minister Anna Malyar, Ukraine uses 5,000 to 6,000 artillery shells per day. Russia shoots about 10 times more.

These Russian shells had a devastating impact on all of Ukraine, leaving once bustling cities completely destroyed. More than 4,000 civilians have lost their lives since the war began in February and nearly five million Ukrainians have fled their country in search of safety.

Being so far from the devastation does not protect him or his staff from being affected by it. Mr Kyslytsya says he asks people who work for him not to watch videos of the carnage in their homes because it will affect their ability to do their jobs.

He does, however, have ample opportunity to speak with the office and advisers of the Ukrainian President, Volodymyr Zelensky, and with the President himself.

“After serving for the Ukrainian government for more than 30 years, I think President Zelensky is the first president who is ready to listen to you,” he said.

“He may not agree with you. He might not even know some things, and he really shouldn’t know, every beat of our gibberish or what we do on a daily basis, but it’s so commendable that an ambassador has the opportunity to speak up and to suggest ideas. ”

Ukraine’s fate has drawn enormous support from Western governments and citizens, many of whom have been won over by the arguments of MM. Zelensky and Kyslytsya that the war is not only a conflict between Ukraine and Russia, but between authoritarianism and democracy.

Many British and American volunteers went to Ukraine to fight. Two British men and a Moroccan national were recently captured while fighting with the Ukrainian army in Mariupol. Aiden Aslin, 28, from Nottinghamshire, Shaun Pinner, 48, from Watford, and Saaudun Brahim from Morocco, were sentenced to death by pro-Russian separatist forces after a show trial for “terrorism”. ”

Mr Kyslytsya called the sentences “null and void from a legal point of view”.

“Everything is in Putin’s hands. These so-called authorities, they have no authority. Whatever they do, whatever they say, Putin himself and his cronies basically decide.

On Wednesday, the United States announced it would send an additional $1 billion in military aid to Ukraine, the largest allocation of weapons and equipment since the start of the war. It remains to be seen whether this will be enough to turn the tide. But already in some European capitals there is talk of urging Ukraine to make concessions, to cede territories for peace. Ukrainians balk at the idea.

“Well, I would suggest that some countries give up their territory whenever there is a difficult situation,” Mr Kyslytsya said of the suggestions. “It is totally unacceptable.

“We are short of arms, but the fact that we are not short – after four months of full-scale invasion – of Ukrainians ready to fight and defend Ukraine, testifies to the fact that any idea of ​​territorial concessions is not is not acceptable.”

Instead, he argues, Ukraine’s allies should help them win the war, so that Putin’s imperialist ambitions are curtailed.

“If governments and parliaments don’t finish this deal and we stop halfway, Putin [..] fire its degenerate generals, reform the army, and then it will certainly strike again in five to seven years. And we will all pay triple the price.