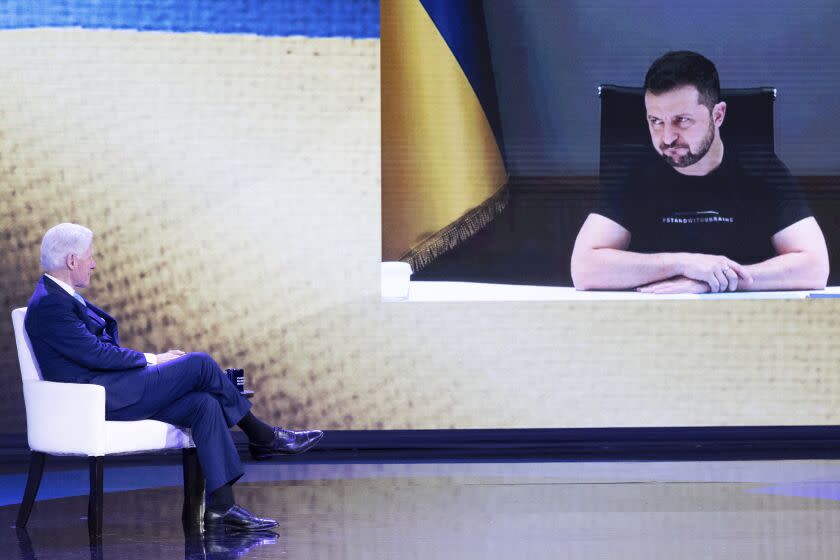 World leaders gathered at the United Nations on Tuesday for the opening sessions of the body’s annual General Assembly, held in person for the first time in three years, but with a twin war crisis in Ukraine and famine in Africa weighing heavily on the gathering.

Addressing the meeting on Wednesday, President Biden and his diplomatic team are working to foster unity among allies to continue arming and supporting Ukraine in its fight against the Russian invasion. With winter approaching and fuel prices rising, US officials fear that some European countries may be tempted to cut their support.

The war has depleted gas supplies but further damaged the export of millions of tons of grain, fertilizer and cooking oil, exacerbating famine and food shortages in many parts of the world, but especially in Africa. As a result, some African governments have refused to join Western efforts to counter Russian President Vladimir Putin, and the Biden administration is hoping to reassure them.

See also  Want a speed bump to deter speeders on your LA street? You have to act fast

But those options are elusive. US Ambassador to the UN Linda Thomas-Greenfield insisted that the sessions, taking place in two weeks’ time, will not be dominated by Ukraine, but also acknowledged that the war has created a “crisis of confidence” for the UN

“Certainly, other countries have expressed concerns that we do not have – because we focus on Ukraine, we do not pay attention to what is happening in other crises around the world,” she said. “We know that as this terrible war rages through Ukraine, we cannot ignore the rest of the world.”

However, the goal of shifting focus outside Ukraine became all the more difficult on Tuesday when Russian-backed separatists announced plans to continue referendums in the regions of Ukraine they occupy. Western officials have called the vote a sham that would be used by separatists to falsely claim that the regions – Luhansk, Donetsk, Kherson and Zaporizhzhya – should be part of Russia and that residents support the idea.

Biden is expected to roundly criticize those and other aspects of what the government calls Putin’s escalation. There are concerns that Putin would launch a large-scale mobilization of Russian forces that would significantly intensify the fighting, just as Ukrainian forces have made significant gains in retaking part of their territory.

Other world leaders who attended the General Assembly, such as French President Emmanuel Macron, joined the condemnation. Putin is not present and Ukrainian President Volodymyr Zelensky is the only official allowed to address the meeting remotely via video. The last two General Assemblies were virtual or partially virtual due to the COVID-19 pandemic.

The pandemic and climate change had already depleted agricultural production and food supplies in many parts of the world. Then the Russian invasion of February 24 cut off shipping from Ukraine’s Black Sea ports, leaving more regions into severe food insecurity. The World Food Program estimates that at least 160 million people face possible famine, mainly in the global south.

See also  Boomerang kids: adults moving back in with their parents

The UN struck a deal with Russia that freed a number of grain shipments, but the success was moderate.

Meanwhile, the US effort to bolster support for Ukraine got good news from Britain. Prime Minister Liz Truss said her government will match or surpass the record amount of military aid it pledged to Ukraine this year, about $2.6 billion.

But the general mood at this year’s General Assembly was grim.

UN Secretary-General Antonio Guterres summed it up, citing numerous conflicts beyond just Ukraine – financial crisis and poverty in much of the world and lack of education for children, along with climate and environmental emergencies. health and the prospects of famine. At the root is the inability of world leaders, including the UN, to solve the problems.

“The divergence between developed and developing countries, between North and South, between the privileged and the rest, is getting more dangerous by the day,” Guterres said. “It is at the root of the geopolitical tensions and lack of trust that are poisoning every area of ​​global cooperation, from vaccines to sanctions to trade.”

Nations are “stuck in a colossal global dysfunction,” he added. “Our world is in danger – and paralyzed.”