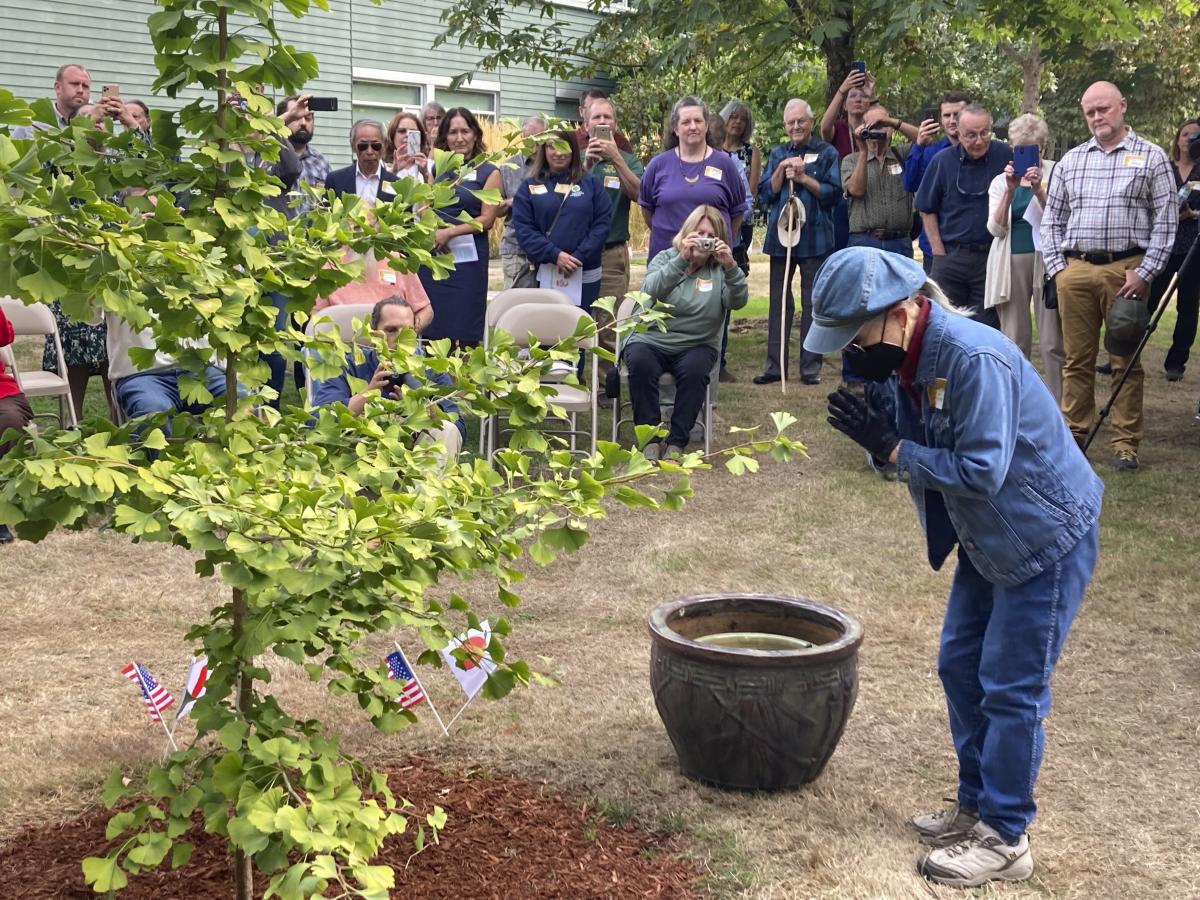 SALEM, Oregon (UKTN) – Hideko Tamura Snider was a 10-year-old girl in Hiroshima, Japan, when the United States detonated an atomic bomb over the city on August 6, 1945 during World War II.

On Wednesday, she described the horrors of that day as a guest of honor at a ceremony that marked the culmination of a four-year campaign in Oregon to plant saplings grown from the seeds of trees that also survived the atomic bombing of Hiroshima.

An Oregon official involved in the campaign told the public that recognizing the ongoing threat of nuclear weapons is particularly relevant today, as Russian President Vladimir Putin made veiled threats to use them in his war against Ukraine.

“So four years ago we thought it was us looking back at a past where nuclear weapons were something that happened a long time ago. And today I think it’s much more relevant to us now that we’re sitting in this room today,” said Jim Gersbach, an Oregon Community Trees board member and spokesperson for the Department of State Forestry.

In Hiroshima, arborist Chikara Horiguchi started growing saplings from the seeds in 1995. There are reportedly 170 trees left in Hiroshima that survived the bomb.

“I believe the best way for me to talk about peace is through the A-bombed trees. A-bombs are the symbol of destruction and restoration,” said Horiguchi in a video for Green Legacy Hiroshima, which has sent seeds and saplings from surviving trees to dozens of countries around the world, including Chile, Ireland and Ethiopia. Green Legacy Hiroshima volunteers began collecting the seeds in 2011.

Arborist Mike Oxendine, of Ashland, Oregon, obtained the seeds from Green Legacy Hiroshima and germinated them. Oregon Community Trees and the forestry department teamed up to find homes for the trees. Communities everywhere responded — coastal towns like Seaside, the mountain town of Bend in central Oregon, Hood River along the Columbia River, and La Grande to the east.

A total of 51 trees were planted around this Pacific Northwest state, the densest concentration of peace trees in Hiroshima anywhere outside Japan, Gersbach said. Most are ginkgo trees, along with a few persimmons – both known for their hardiness.

Speaking at the Oregon Department of Forestry headquarters, Tamura Snider said the effort and those behind it symbolize “ways of coming together in peace, with great hopes for the future of this world, rather than perishing in the divine nuclear explosion.”

She described the morning of August 6, 1945, when she heard an air raid alarm and then an all-clear-ready signal. But then the atomic bomb exploded in a blinding flash that shook the ground and destroyed buildings. Her mother was in another part of town and died. Alone, Tamura Snider crawled out of the ruins of the house into pitch-black darkness and began to “flee from the fire and the terrible things in Hiroshima.”

“I walked and walked, and I couldn’t move,” she said. “And I collapsed in the middle of a path in an open paddy field. And I said to myself, ‘I don’t have the strength to take another step, and if I just die here, that’s going to have to happen.'”

But she looked up to the sky and saw a patch of blue sky ‘and it changed everything. I felt reborn.”

During the ceremony in Oregon, Tamura Snider, who immigrated to the United States decades ago and lives in Medford, went with dozens of other people to one of the peace trees, a ginkgo, on the grounds of the forestry department. She bowed to the tree and watered it with a ladle. Others lined up to water it too.

Through December 31, 1945, an estimated 140,000 people, including those with radiation-related injuries and illnesses, died from the bombing of Hiroshima, representing 40% of Hiroshima’s population of 350,000 before the attack.

“These trees of peace not only bring a message of peace to the people of Hiroshima, they are also symbols of survival and resilience in the face of unimaginable destruction,” said Oregon State Forester Cal Mukumoto. He said they give him hope that people in Oregon can persevere through tough times.