Hong Kong’s “father of democracy” among activists threatened with jail 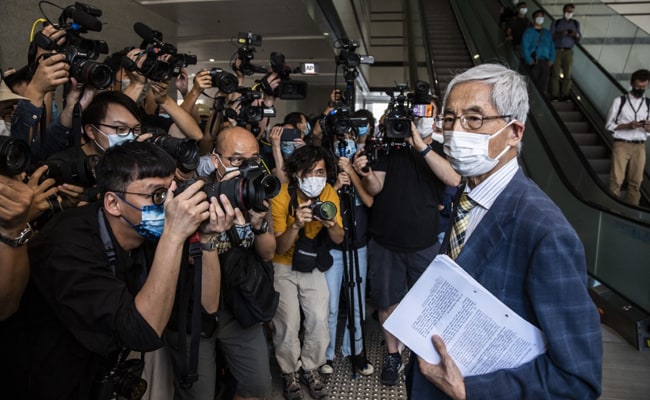 Among Hong Kong activists threatened with jail Thursday is an octogenarian lawyer dubbed the “father of democracy” who Beijing once asked to help draft the city’s mini-constitution and was often rejected by young activists for being too moderate.

Among the broad spectrum of democracy advocates in Hong Kong, Martin Lee, 82, would not be considered a hit man.

For decades, he campaigned unsuccessfully to see democracy in Hong Kong, but always advocated working alongside authorities in Beijing, even though they called him a traitor.

He criticized the younger generations who favored a more confrontational approach and remained a vocal opponent of political violence.

Now he faces up to five years in prison for helping organize a huge but peaceful rally during the months of political turmoil that rocked Hong Kong in 2019.

“Eventually I became an accused,” he joked after his arrest last year.

“How do I feel? I’m very relieved. For so many years, so many months, so many good young people have been arrested and charged, while I haven’t been arrested. I’m sorry.”

The fact that a figure like Lee could go to jail illustrates just how much space for dissent has been squeezed out of Hong Kong, even for the more moderate voices.

Son of a general

Lee’s career reflects the recent history of Hong Kong and political pragmatism reigns in his family.

His father Lee Yin-wo was a general of the Kuomintang forces which lost the Chinese Civil War to the communists of Mao Zedong.

Despite their differences, the general-turned-teacher kept in touch with the main leaders of the Communist Party, including Zhou Enlai.

Young Lee was a typical product of the local Hong Kong elite under colonial rule.

He studied law in Britain and navigated comfortably between English, Cantonese and Mandarin. When Hong Kong was rocked by leftist riots in 1967 during the Cultural Revolution, Lee went to defend people accused of spearheading the unrest.

In the run-up to Hong Kong’s transfer to China in 1997, he was one of the lawyers chosen by Beijing to draft the Basic Law.

This document grants Hong Kong certain freedoms and autonomy unseen on the authoritarian continent under a model dubbed “one country, two systems”, including the possible promise of universal suffrage.

Critics say Beijing has demolished that promise in recent years and Lee was among the first to sound the alarm on China’s assurances that Hongkongers could keep their way of life.

He was kicked out of the Basic Law Committee and was quickly labeled a traitor by state media.

He went on to found the city’s first pro-democracy party and joined Beijing’s post-transfer opposition after the transfer.

But he always supported “one country, two systems” and the idea that Hong Kong was part of China.

After the handover, Britain’s Prince Charles wrote in a newspaper article: “So we left Hong Kong to its fate and the hope that Martin Lee, the leader of the Democrats, would not be arrested. “

As opposition to Beijing’s rule hardened among many Hong Kongers, Lee was often criticized by those who felt his generation’s tactics had failed to achieve anything close to suffrage.

A protest for student-led democracy erupted in 2014, and a new generation of hitman activists like Nathan Law and Joshua Wong have come to the fore – a precursor to the even larger and sometimes violent rallies of 2019.

Lee was aware that his calls for a more patient approach had become less popular.

“I’m a public enemy from China’s point of view. And kids don’t like me either, because I don’t agree with their goals,” he told The New York Times. ‘last year.

But he said he recognized why so many young Hong Kong people were frustrated and accused Beijing of failing to meet its own commitments.

“Now China doesn’t even want to follow the rules in its own book anymore,” he told The Guardian last year as the city was covered by a sweeping new national security law.

“But if you keep cracking down on people like that, things are going to explode.”

“Even if you put me in jail, kill me, I will always point out that it is their fault.” Democracy will one day come to China ”.