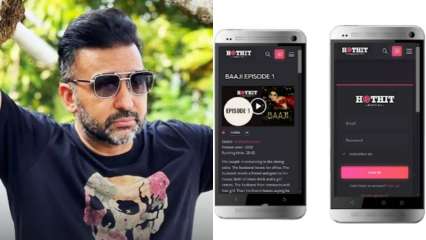 On Google Playstore, HotHit Movies App describes itself as “The Best Indian Web Movies & Series. Your search ends at HotHit Movies and Originals. To watch our video content, you must subscribe with one of the following packages in using: Paykun payment method and get instant access. “

The description further states, “We have the best collection of Indian Movies, Short Films, Videos and Web Series in all categories. Our OTT subscription options will let you enjoy unlimited videos every month. excitement today! “

In the “About Us” section of HotHit’s website, the app describes itself as “an online streaming platform where you can enjoy hundreds of Hindi adult movies and web series. We also produce HotHit originals with steamy content. Right now everyone needs something to release stress. There is nothing better than ready-made adult content full of double jokes meaning and raw love scenes. “

See also  Kimberley Garner, Raye and Anne-Marie lead the stars on day one of Wimbledon

Gehna Vasishth, who has featured in several soap operas, is said to be a prominent player in this racket.

The videos were said to have been uploaded to mobile apps in the UK such as Eightshots, Nuefliks and HotHit.

Those arrested include Rowa Khan aka Yasmeen, who claims to be a producer-director. Police also arrested Dipankar Khasanvis aka Shyam Banerjee, who is Khan’s husband. Police claimed that she was part of the company that ran the app on which obscene and pornographic content was distributed. Yasmeen Khan and Khasanvis are both associated with Hot Hit Digital.

Earlier, Mumbai Police (Crime) Joint Commissioner Milind Bharambe said Raj Kundra and his brother-in-law Pradeep Bakshi’s two companies have a mobile app called “HotShots Digital Entertainment”, developed by Kenrin Ltd. The app which went by the name of “Hotshots is at the center of the controversy and is said to have been used to distribute pornographic content.

After complaints, this app was taken down by Google Play Store and Apple App Store. However, the app’s Android Application Package (APK) is available on several websites. The app’s description on the stores said “HD Videos and Shorts with Unparalleled Exposure” and promised “private content from hot photoshoots, short films and the lifestyle experience of celebrities around the world. “. In addition, the app also offered services such as live communication with “some of the world’s most popular models” and the original content was only accessible to paid subscribers.

After creating the content, the two companies – Viaan and Kendrin – made it available on mobile apps, offering subscriptions similar to traditional OTT platforms, advertising on social media, which were all illegal because of pornography. in all its forms is prohibited in India.