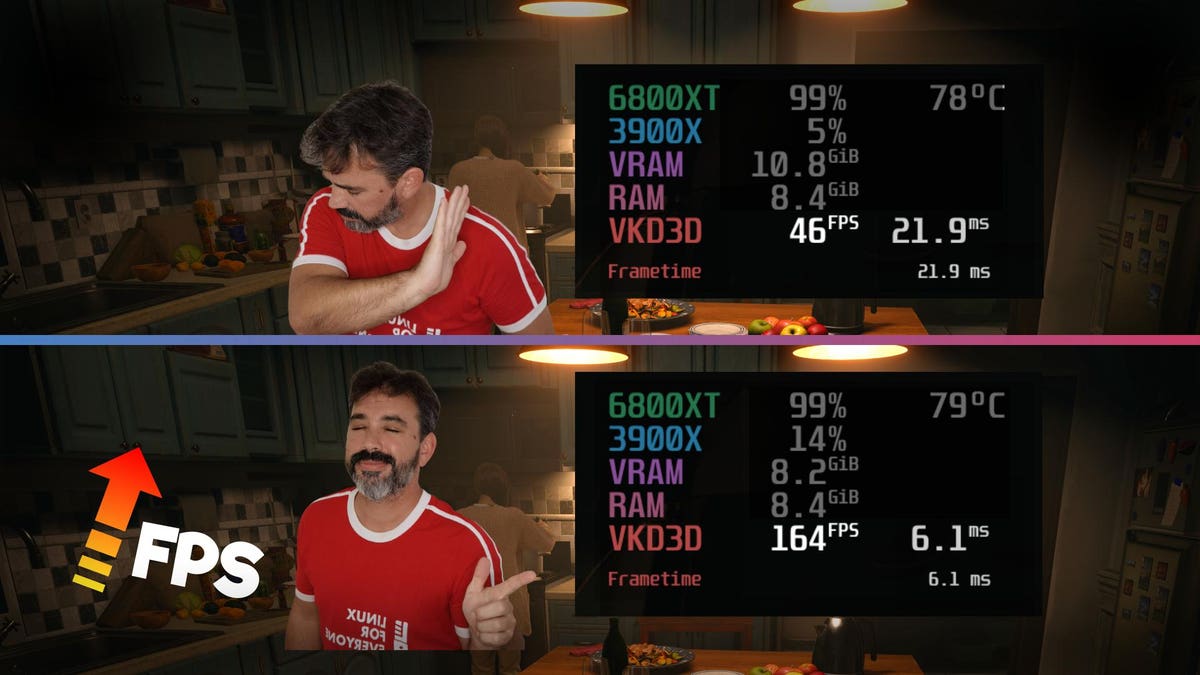 Would you like a free performance upgrade for your Steam games without having to scratch and find your way to a new graphics card? If the answer is even a tentative ‘yes’, do me a little favor: try to identify the major visual differences between those screenshot I captured Resident Evil Village. If you squint at your screen and find it hard to do so, imagine how difficult it would be to spot them with the game in motion.

I have shown you these screens (see the video below for several more examples) to illustrate a point. One of these screenshots is running between 40 FPS and 55 FPS, while the other gives 115 FPS to 140 FPS.

Sure, Resident Evil: Village has official support for AMD’s FidelityFX super-resolution, as do approximately 18 other Windows games. It’s not a secret. But did you know that thanks to the smart people at Valve and Red Hat, you can play literally thousands of games in the Steam library with AMD FSR?

FSR blew me away and we need to talk about it. Because AMD’s latest open source technology is a literal game changer for Linux gamers, on everything from integrated Intel and Ryzen graphics to high-end gaming powerhouses like the Radeon RX 6800 XT or the Nvidia RTX 3080.

But how do you enable FSR and use it with Linux? How do you confirm that it is working? What are his limits ? Let me answer these questions for you and show you FSR in action.

Let’s start with a quick look at AMD’s FidelityFX super resolution. In a nutshell, FSR is an open source solution that uses scaling technologies to give you higher frame rates and resolutions than your hardware is capable of natively delivering.

It’s the perfect tool to have in case of a GPU shortage!

1) FSR does not only work on newer AMD graphics cards. It runs on GPUs as old as the Radeon 460, 470 and 480. It is compatible with AMD Ryzen and Intel processors with integrated graphics (APU). It even works on Nvidia’s latest RTX graphics cards and their 10 Series lineup.

2) FSR can be used for EACH NON-NATIVE STEAM LIBRARY GAME. As long as it uses Proton to play, that is, it uses the Vulkan API, you can enjoy FSR.

Linux Guide: How to Use FSR with Your Steam Library

To use AMD FSR with your Steam library, you will need the custom version of Proton from Glorious Egg Roll.

Fortunately, I have a mini guide here at UKTN, showing you how to install and update it easily. (The tl; dr is: install an app called ProtonUP and make sure you are using Proton version 6.13-GE-1 or newer. Because these have FSR directly integrated! Follow that and the first step is completed!)

The next step is to add this launch command to any Steam Play game you want to use FSR with. So all you have to do is right-click on the game title or cover art, select the properties and, in the launch options area, type: WINE_FULLSCREEN_FSR = 1% order%

However, if it is a game that has official FSR support on Windows, such as Termination resistance Where Resident Evil Village, just use the in-game options! Both games work great on Linux.

Now go down to the Compatibility tab and tell Steam to use the custom version of Proton-GE. As it is, you will need to complete these steps for each match. There are also two caveats to be aware of:

1) You need to run the game in full screen for FSR to work properly.

How do I know FSR is working?

During my testing I saw improved frame rates across the board but sometimes I wondered “does this actually work or is it just stuck on this lower resolution and not on a At scale?”

If you want to be sure, compare your in-game resolution to your monitor’s running resolution. You can normally find it on your monitor’s OSD (On Screen Display) by pressing the menu or the enter button.

I was impressed with FSR on Linux, especially after only testing it on a Ryzen 7 4800H. It takes a game like Borderlands 3 from a choppy mess at 1080p to perfectly playable.

I hope Valve and the company find a way to officially implement it in Steam for Linux. Being able to easily use FSR with thousands of games would definitely be a valuable feature for Steam Deck, don’t you think?