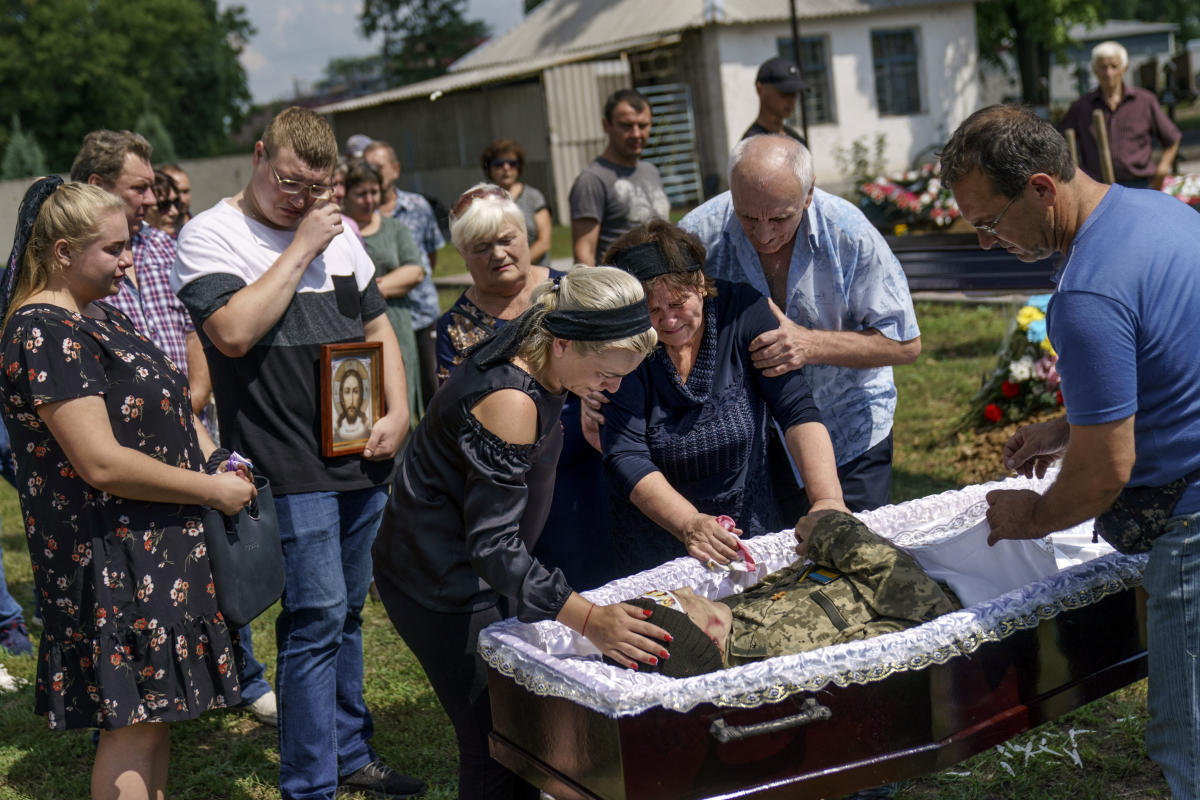 A coffin was opened to reveal the body of 48-year-old Oleh Panchenko, dressed in military fatigue, who had visible facial injuries.

“Our hero, I will forever be proud of you,” Panchenko’s mother, Lilia, said through uncontrollable sobs as she bent over her son and kissed his forehead. “God, why are you taking our boys from us?”

The funeral in Pokrovsk brought the number of Ukrainian soldiers buried there to 20, in a newer section of the cemetery dedicated to military fatalities.

See also  Dallas homeowner shoots and kills man who pretended to have a gun, attacked him twice

Nearly all of them have been killed since the Russian invasion began on February 24, although others have been killed in the last eight years of fighting between Ukrainian forces and Russian-backed separatists over control of the eastern Donbas region.

While the Russian armed forces are making slow progress in Donetsk province, which makes up half of Donbas, the Ukrainian government is offering funeral services for soldiers killed in the fighting and benefits to family members left behind.

One of those soldiers, 26-year-old Serhiy Marchenko, was fighting in an artillery unit in the Donetsk region when he was killed on July 28.

At the cemetery in Pokrovsk, a small group of his relatives stood by his closed coffin, draped in a Ukrainian flag, while a priest in a blue robe waved the smoke of incense from a golden censer – part of an Orthodox funeral rite.

The grieving relatives jumped as shots rang out in the cemetery—from three Ukrainian soldiers performing a three-fire salute in honor of the dead.

When the priest finished the rites, Lilia, Panchenko’s mother, wiped flies from her son’s face with an embroidered handkerchief until it was time to cover his body and lower the coffin into the grave.

“Wait, wait!” she cried as relatives pulled her away, before the coffin was finally closed.

Panchenko’s daughter, Ruslana, said he was an experienced soldier and squadron commander who volunteered to join the front line after hearing of alleged Russian atrocities in Irpin and Bucha, a suburb of the capital Kiev.

He was killed on July 27 after serving at the front for nearly five months, she said, and was the only survivor in his unit after heavy fighting in Zolote in the Luhansk region.

“He said it was time to kick (the Russians) out,” she said. “He didn’t want to sit still. He wanted to defend and was not afraid.”

Follow UKTN’s coverage of the war between Russia and Ukraine at https://apnews.com/hub/russia-ukraine