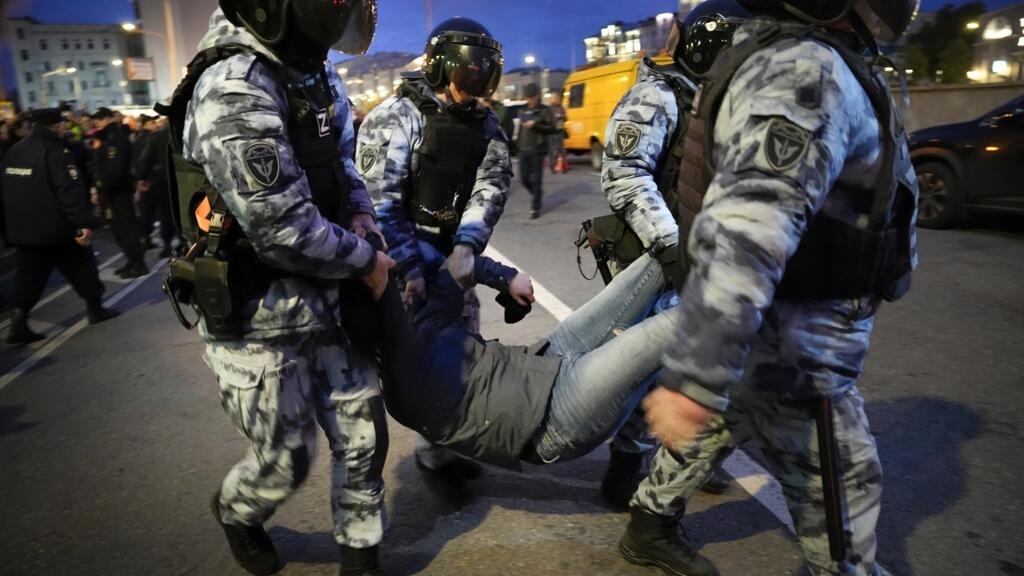 More than 1,000 people have been arrested in demonstrations across Russia against President Vladimir Putin’s announcement of a partial mobilization of civilians to fight in Ukraine, a police monitoring group said Wednesday.

The OVD-Info monitoring group counted at least 1,054 people detained at rallies in 38 different cities across the country after Putin’s morning address to the nation.

The protests were the largest in Russia since demonstrations that broke out after the announcement of Moscow’s military intervention in Ukraine in February.

UKTN journalists in the center of the Russian capital Moscow said at least 50 people were detained by police wearing anti-riot gear on a main shopping street.

In Russia’s former imperial capital, Saint Petersburg, UKTN reporters watched as police surrounded a small group of protesters and arrested them one by one and loaded them onto a bus.

“Everyone is afraid. I am for peace and I don’t want to have to shoot. But coming out now is very dangerous, otherwise there would be a lot more people,” said protester Vasily Fedorov, a student who has a pacifist symbol on his chest.

“I came to the rally planning to participate, but it seems they have already arrested everyone. This regime has condemned itself and is destroying its youth,” said Alexei, a 60-year-old resident who refused his last to give word. name.

“Why do you serve Putin, a man who has been in power for 20 years!” a young protester yelled at a police officer.

“I came to say that I am against war and mobilization,” Oksana Sidorenko, a student, told UKTN.

“Why are they deciding my future for me? I’m afraid for myself, for my brother,” she added.

Alina Skvortsova, 20, said she hoped the Russians would soon understand the nature of the Kremlin’s offensive in neighboring Ukraine.

“Once they really understand, they will take to the streets despite the fear,” she said.

Defense Minister Sergei Shoigu said on Wednesday that Russia would initially mobilize some 300,000 reservists after Putin warned in a televised speech that Moscow would use all available military resources in Ukraine.

Flights from Russia were nearly fully booked this week, airline and travel agency data showed Wednesday, in an apparent exodus of people unwilling to join the conflict.