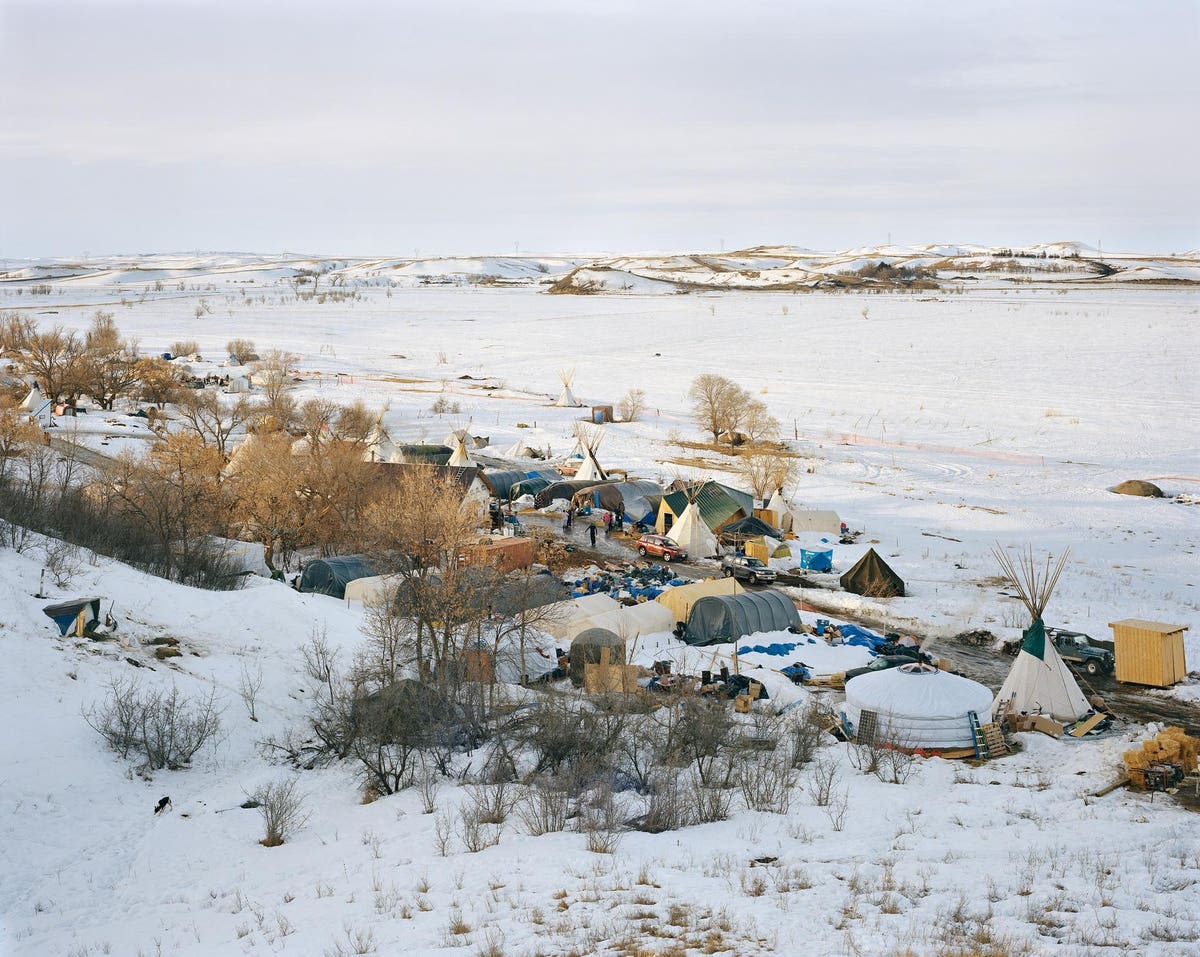 First Property rights, an economic and legal term used to define theoretical and legal ownership of resources and how they can be used, seems to be the wrong title for Mitch Epstein’s latest book of photographs, which was published by Steidl in September.

The book, which includes beautifully composed photographs and portraits interspersed with first-person narratives, opens with images of the 2016 protests at Standing Rock in solidarity with Očhéthi Šakówiŋ (known in English as the Sioux Tribe), which was intended to prevent the construction of the Dakota Access Pipeline. Divided into sections, the book then continues with series on the border between Mexico and the United States; another pipeline protest in Lancaster, Pennsylvania; fires and floods in California, Georgia and Louisiana; protests against the construction of a huge telescope at Mauna Kea, Hawai’i; the shooting at the Tree of Life Synagogue in Pittsburgh, Pennsylvania; the Black Lives Matter events in the summer of 2020; and the subsequent vandalism of Confederate war monuments.

Without further examination, the term “property rights” seems to cover only some of these topics – Standing Rock, of course, and the protests at Lancaster and Muana Kea – while letting the others fit freely into a chosen narrative. . But careful reading of the book weaves together a complex and beautiful tale of how ideas about property rights have shaped and perverted the concept of the United States. Ultimately, the book makes a powerful argument that returning to a more collective concept of our place in nature may be the only way to save this fragile place we call our “nation”.

“As an artist, I have struggled against my reluctance to engage directly with contemporary political themes in my work,” says Epstein. “I was afraid of falling prey to didacticism. Property rights freed me from this fear and reassured me that it is an essential part of my work, as an artist, to address the increasingly complex realities of our today’s world, political and other.

The project began the day after the Women’s March in Washington DC in January 2016. President Donald Trump had just been invested and Epstein felt called to action. He went to Standing Rock, where protests against the pipeline were taking place. He photographed the terrain, the arrested families, the signage, the American flags. But he was also careful to listen. “I knew far too little about the plight of indigenous peoples and the complexity of land issues,” he says. “I came home with it, and I couldn’t look away from it.”

It was a time when so many struggled to understand how Donald Trump got elected president – and what that meant for their hokey, high school-social studies concepts about the United States. Long-standing historical tales of progress have been replaced with questions of how white males have seized and retained much of power in the United States since its founding in 1776, usually at the expense of indigenous peoples and individuals. of color who have completed the labor. And often the questions revolved around the concept of “property rights”, which served as a rationale.

Epstein, when photographing, tries to be absolutely present in the moment. “I’ve learned to listen better, to work hard to let go of my own preconceptions and to approach something I don’t quite understand with a great open mind,” he says. His ability to receive complicated narratives with bias is visible throughout the book, which weaves a complex and multifaceted picture of modern America. Small moments of empathy are woven throughout, whether it’s a man touching a stone that says ‘love’ at the Tree of Life memorial, or a photograph of a wall that shows a photo of a woman bringing water to a sick migrant at the border in Arizona.

“As a society, we just take a huge amount for granted,” says Epstein. “We are so privileged, but we are also a society that is built on such radical inequalities.” In the end, he notes, he walked out of the project with more compassion for others.

The more you watch Property rights, the more ridiculous and comprehensive the term becomes. To the stunning vistas of the American landscape, which Epstein captures throughout the book, we have attached property rights that exist only in our imaginations. Property rights are used to seize land at Standing Rock and Lancaster; they are also used to prevent people from entering the United States in border regions. Property rights also apply to people – women’s bodies, black bodies, fetal bodies. They are used to justify and deplore political protests; they also serve as a justification for maintaining Confederate monuments on private land even when they deeply hurt the descendants of slaves. They are used to justify and restrict religious freedom and freedom of expression. In the United States, wherever you look, property rights are juxtaposed with property rights until the whole concept loses its meaning, exposed as a sort of human simulation of reality.

The rapacious desire to acquire and name goods is not without consequences, however. We see them now, as wildfires devour the West and flooding from mega-storms devour much of the rest of the coastal states. “We have to take responsibility for a certain way of life, for what we’ve accomplished,” says Epstein. “We are grappling with the consequences of unbridled growth in the world, the single goal of always more is better and better.”

Nature, he says, is so much more sophisticated than we are. If we were wise, it seems to imply, we would work in tandem with our natural environment rather than working to destroy it for imaginary gain.

In the meantime, Epstein is arguing for more empathy on all levels. “Extremism is not the way to go,” he says. “People need to be more involved politically, but they also need to do it humanely. ”

To learn more about the book, visit the Steidl website.