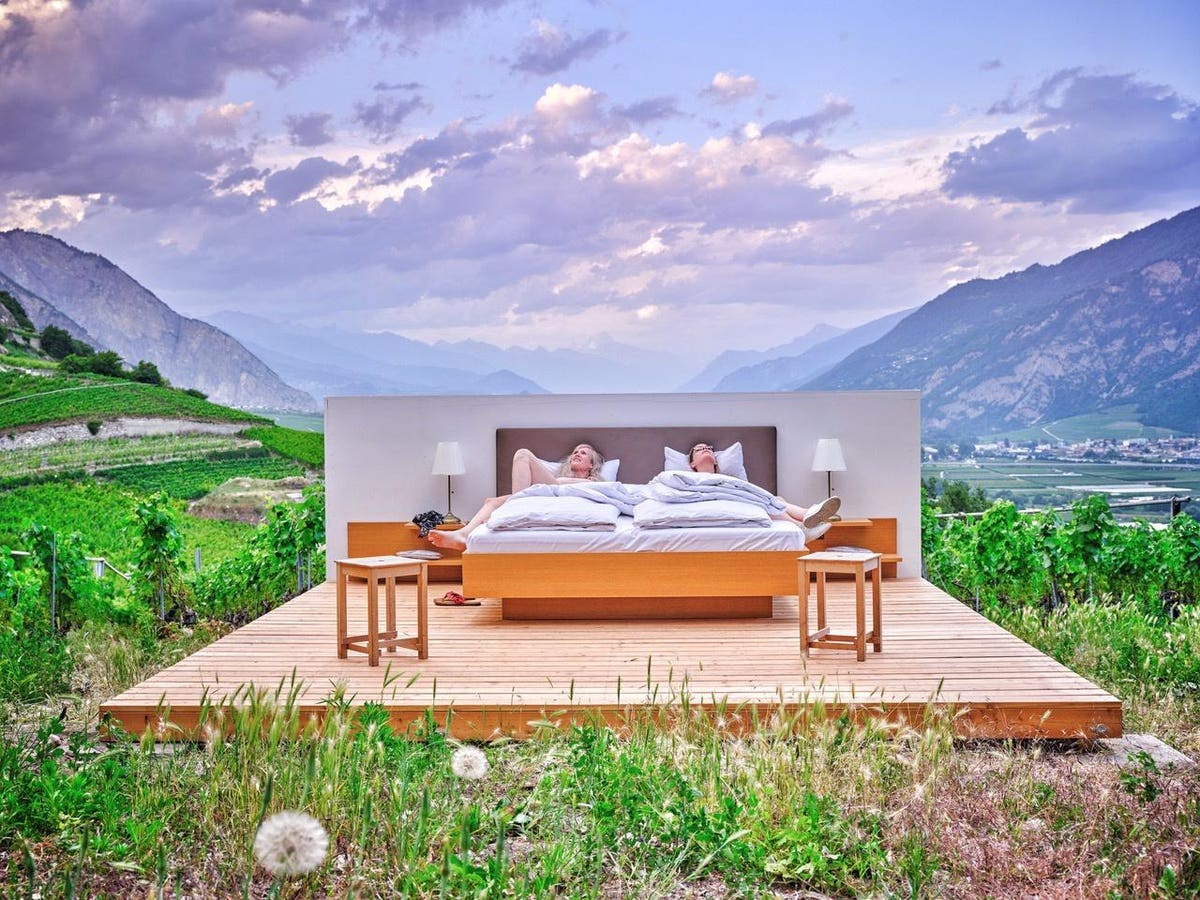 Do you dream of a night under the stars but are allergic to sleeping bags? This summer in Switzerland, an artistic/hospital concept called Null Stern – The only star is you can offer exactly what you need!

Imagine a hotel room without a roof or walls, located directly under the sky in a beautiful alpine landscape. For some, it may seem like an optical illusion, but for the 6,500 travelers on the waiting list, a night at Null Stern (whether near Saillon in Valais or at 2,000 meters above sea level in one of the six locations in eastern Switzerland) is indeed a reality. Surrounded by vineyards, the Saillon suites will be available from July 1 to September 18, 2022.

“The definition of luxury has evolved over the years from the tangible to the intangible,” said hotelier co-founder Daniel Charpentier. “Marble in the bathroom is now far less important than a customer’s emotional experience.”

Mr. Charpentier worked in hotels around the world before returning to settle in his native Switzerland. There he met concept artists (and twin brothers) Frank and Patrik Riklin, first known for an art installation set in a 1980s nuclear shelter hidden in the basement of a building in St. Gallen. They named it “Null Stern Hotel”, the starless hotel. Since then, the Riklin brothers have continued to imagine works of art and art installations that challenge people’s habits and thought processes. apart from museums and galleries, I

For Null Stern, the three partners are looking for locations that offer both a spectacular backdrop and view. They build platforms on which they place a Queen bed, two bedside tables and light fixtures.

“We call them suites without real estate,” Mr. Charpentier said. “But they are within walking distance of the bathrooms and also a spare bedroom for those guests just in case the weather turns.”

Each suite costs $295 per night and comes with its own butler, responsible for bringing dinner and breakfast to guests in bed. But the Null Stern butler is also his own invention. The person looking after the guests will wear a white shirt, white gloves and a bow tie, but have complete freedom as to what else they wear. And while he will be responsible for traditional service tasks, he will also be free to improvise in order to enhance the experience.

Inspired by the simple beauty of the Swiss landscape, the Riklin brothers are known for taking their art out of museums and galleries, the typical frontiers. Indeed, by giving the human being a place of rest within nature, he stages the landscape as an art.

Finally, a new suite called the “anti-idyllic” suite, created in partnership with the town of Saillon, defies even the beauty of the landscape. Located between a gas station and a highway, it aims to cause “positive disruption”.

“There are so many problems in the world right now, how can we sleep?” asked Patrick Riklin. “Our new release is a thought-provoking incubator.”

The objective of the brothers is to make the guests think. Perhaps by continually breaking with convention, they will succeed in bringing people together to effect change.

“What is luxury? How can we be safe? they ask.

“We all love nature, but we keep destroying it,” he said. “The chambers of the future may very well have no walls or roofs because we won’t have the resources to build them any other way.”

Whether you choose the “conventional” sequels or the anti-idyllic ones, Null Stern will challenge your thinking. Are we just going to go back to the way we used to travel before the pandemic? Art asks questions. The answers depend on us.

The Best Rosés to Bring to a Summer Gathering

Travel to Europe this summer: how to get there and what to avoid