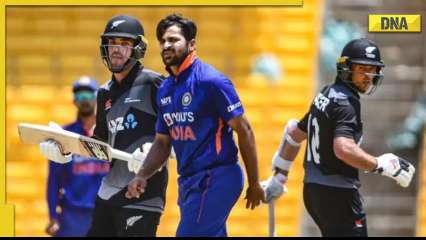 After a hard-fought battle in the first ODI, Team India will look to seal the series in the second ODI against New Zealand at the Shaheed Veer Narayan Singh International Stadium in Raipur. The Men in Blue currently have the upper hand with a 1-0 lead in the three match series, having emerged victorious in Hyderabad. With the series on the line, both teams will be eager to beat each other and secure victory in the series.

The Black Caps must get a win in the upcoming game if they want to maintain any chance of claiming the series. However, India will be eager to complete the series on January 21 in Raipur, after racking up consecutive victories in the 50-over format.

See also  Rishabh Pant is the only Indian in 2022 ICC test team, Siraj make it to ODI team

The Shaheed Veer Narayan Singh Cricket Stadium in Raipur will host its first international match. This will be India’s 46th venue to host an ODI game, a momentous occasion for the nation.

Before the start of the second ODI match, let’s take a look at some of the key statistics and records to be set in this game:

Highest batting average vs India in ODIs (hosting at least 15):

Most runs in international cricket:

Records that can be broken in this game-

Mohammed Shami is about to hit a major milestone, needing just four more wickets to reach 400 in international cricket. Similarly, Shardul Thakur is also on the cusp of a personal best, needing only four more wickets to reach 50 in One Day Internationals. With both bowlers in fine form, it won’t be long before they reach these impressive milestones.

Suryakumar Yadav is just three runs away from reaching the 2,000 run mark in international cricket.

Virat Kohli is just 111 runs away from becoming the sixth batsman to reach the 25,000 international run milestone, joining the illustrious company of Sachin Tendulkar, Ricky Ponting, Kumar Sangakkara, Jacques Kallis and Mahela Jayawardene. If he succeeds, Kohli will join an elite group of cricketers who have achieved this remarkable feat and cemented his place in the history books.