Indian zookeeper, who served Dubai zoo for 32 years, dies of COVID-19 at home 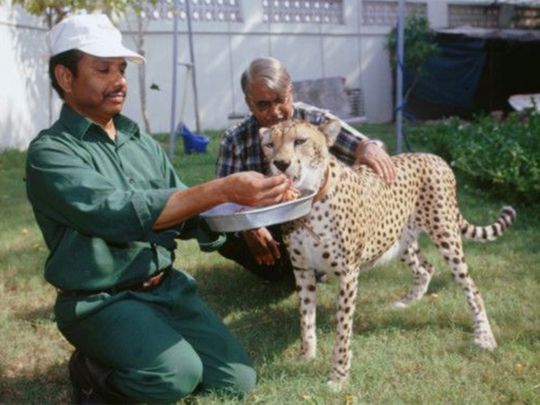 Dubai: An Indian zookeeper, who raised felines and other wildlife at the Dubai Zoo for 32 years until 2017, is remembered for his immense contributions after his death this week.

R. Devadoss, from the Indian Union Territory of Pondicherry, succumbed to complications from COVID-19 in his hometown, his family said. “My father passed away on Tuesday evening,” his only son Madhan told Gulf News by phone from Karaikal in Pondicherry. “We were hoping to save him. But, unfortunately, he couldn’t make it because his lungs were badly affected and his body was not responding to medication.

The 23-year-old game design student said he and his mother Senthamarai also contracted COVID-19 and went into quarantine.

Dubai wildlife specialist Dr Reza Khan was one of the first to contact the bereaved family, offering condolences and paying tribute to his former employee. Currently on vacation in his hometown in Bangladesh, Dr Reza said on WhatsApp that he received calls from former Devadoss colleagues after learning of his disappearance. “We all miss him. We are deeply shocked. “

Dr Reza said Devadoss was one of the best human beings he had seen and one of the Dubai Zoo’s most trusted zookeepers. “We have lost a precious family friend and an obedient employee. May Almighty rest him in peace and may his son Madhan, his wife and other relatives muster enough courage to overcome this great loss and this difficult time, ”he posted on Facebook.

He also shared an endearing photo with Devadoss that was taken during Dr Reza’s 60th birthday celebration.

Face of zookeepers in UAE

Dr Reza recalled how Devadoss once became the face of zookeepers in the UAE. “Gulf News Friday magazine covered the people who work in zoos in the UAE in 2002. They all interviewed us and the cover page of this edition of the magazine featured the photo of Devadoss feeding a lion cub.”

Some of the photos taken for the cover story titled “Behind the Cage: Links between Animals and Zoo Keepers in the UAE” showed Devadoss feeding and playing with the lion cub named Mina and other animals wild at Dubai Zoo.

In the interview, he said he does the double job of a storekeeper and a keeper of baby animals in the zoo.

He said he decided to apply for the zookeeper job in Dubai to support his family, including his younger siblings. “… In our village, at home, we have always lived near animals and served them. From day one, I was never afraid to approach the [big] cats because most of them were born here and I watched them grow up. They recognize me. I have looked after at least six lions and four cheetahs. I have a great love for all animals, ”he said in an interview published in October 2002.

“I understand [big] cats very well. They get angry sometimes, but they never attack with the intention of hurting. I feel made for this job and I feel like a mother to them, ”he added.

Sharing her memories with her father, Madhan said, “He was a normal person. Very kind. Everyone loved him. His goal was only to work and take care of animals. He was only sad that he couldn’t work at Dubai Safari when it opened shortly after his retirement.

“He would come home for a month every year. He told us stories about the zoo, the animals, the doctor and his family who lived in the zoo villa. He loved all animals. He was always talking about the gorilla, the tiger, the lion.

Devadoss and his fellow zookeepers also lived in their accommodation inside the zoo. After his retirement, the family told him not to pursue anything else, Madhan said. “He had worked hard at the zoo for several years. We wanted him to rest.

He said the family planned to visit Dubai last year. “But that had to be canceled due to the COVID-19 pandemic. Hope I can take my mom to Dubai someday and we can see the old zoo area and visit Dubai Safari.

Share
Facebook
Twitter
Pinterest
WhatsApp
Email
Telegram
Previous articleSA vs PAK Dream11 Team tips for today’s match prediction, 1st ODU April 2nd
Next articleBoat Race 2021: What time is Oxford vs Cambridge, how to watch and what is the race route?