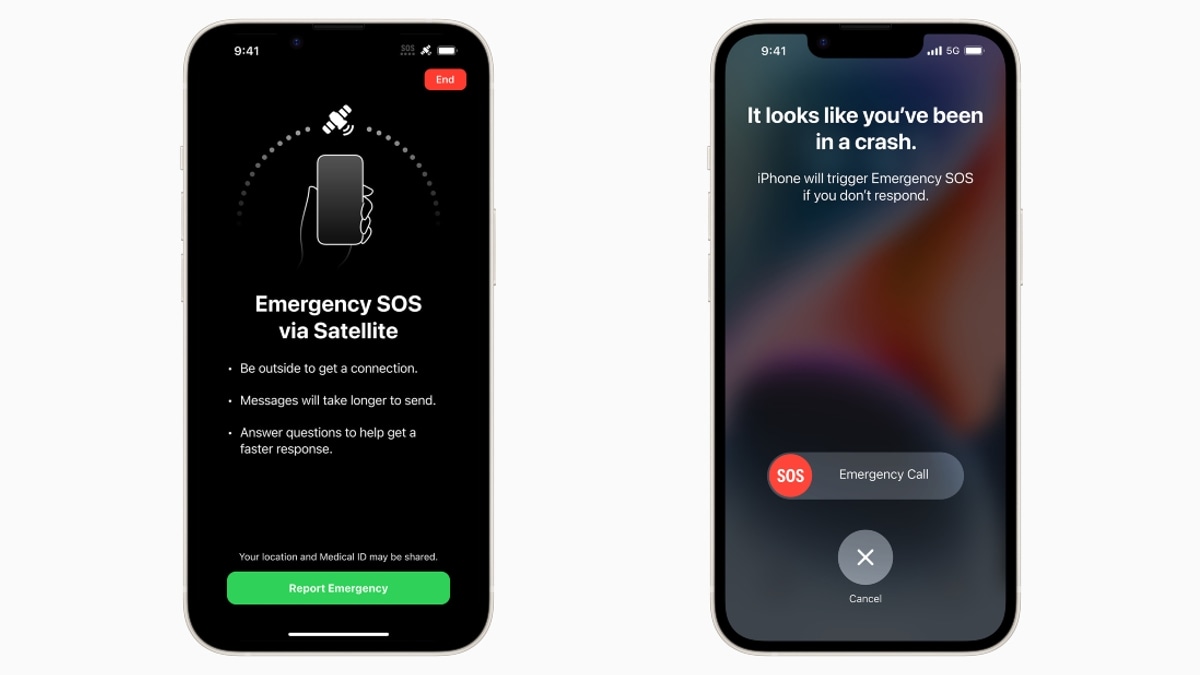 In addition, while the non-pro models come with last year’s Apple A15 Bionic SoCs, the Pro models get the latest Apple Bionic A16 SoC under the hood. The latest smartphones come in the US with E-SIM activation without Wi-Fi. For the first time, the iPhone models in the US will not have a SIM tray.

The smartphone also comes with emergency satellite communications technology that can be used to send SOS messages via satellite. The feature begins in the US and Canada and is free with iPhone 14 for two years. All phones also come with a crash detection feature that automatically calls emergency services when a user is unconscious or unable to reach their iPhone.

The iPhone 14 has a flat-edge aerospace-grade aluminum frame, with Ceramic Shield material on the front and IP68 dust and water resistance, just like the previous generation. The device has a 6.1-inch Super Retina XDR OLED display which is said to be better in terms of brightness and color reproduction compared to last year’s device. It is said to offer 1200 nits of peak brightness and support for Dolby Vision.

Under the hood, the iPhone 14 gets Apple’s own A15 Bionic SoC from last year, which powers last year’s iPhone 13 series. Apple continues to offer Face ID technology as the only biometric security option to unlock the phone.

Apple isn’t officially disclosing the amounts of RAM and battery capacity for each model, but third-party teardowns in the coming weeks should shed more light on this information. Apple says the iPhone 14 and iPhone 14 Plus will be able to deliver more runtime compared to last year’s iPhone models.

As for the camera, the iPhone 14 gets a 12-megapixel wide-angle camera that combines a 1.9um sensor and an f/1.7 aperture lens. There is a 12-megapixel sensor coupled with an ultra-wide-angle f/2.4 lens and a 120-degree field of view. Apple says there’s a new 12-megapixel TrueDepth front camera with an f/1.9 aperture.

The company also highlighted a few camera tricks up the sleeve of the handset, including improved video recording with a new stabilization feature called Action Mode. This mode uses the phone’s motion sensors to better correct video. Cinematic mode is now available in 4K at 30 fps and 4K at 24 fps. Apple also praised the improved low-light performance, thanks to the new Photonic Engine.

Low-light performance is claimed to be 2x on the ultra-wide camera, 2x on the TrueDepth front camera and 2.5x on the main camera. It applies the computational advantages of Deep Fusion in the imaging process. There’s also an improved True Tone flash that’s 10 percent brighter, Apple says.

The iPhone 14 Plus has similar hardware to the iPhone 14, except for the larger screen size and battery backup. The device will have a 6.7-inch Super Retina XDR OLED display and Apple claims that the iPhone 14 Plus has the best battery life in an iPhone. Under the hood is the A15 Bionic SoC that powers the vanilla iPhone 14 and the camera setup is also identical on both models.

As for the Pro models, Apple has used surgical grade stainless steel which is said to be wear resistant and corrosion resistant. The iPhone 14 Pro gets a 6.1-inch Super Retina XDR Always-On OLED display with Apple’s ProMotion refresh rate feature. The Pro models can be scaled down to 1 Hz to provide a combination of smoother movements and an energy-efficient system.

The display also offers the highest peak outdoor brightness in a smartphone: up to 2,000 nits, which is twice as bright as iPhone 13 Pro. The iPhone 14 Pro comes with a Ceramic Shield front cover that is touted as stronger than any smartphone glass.

As mentioned, the big difference in rendering is the introduction of a pill-shaped perforation cutout instead of the famous trendsetting notch. Apple calls it Dynamic Island, an “interactive space” that expands for notifications in addition to other information such as music player, call interface, Maps, among others. The company says the feature works with third-party apps.

Under the hood is Apple’s new internal A16 Bionic SoC, which is said to be the most powerful chip in a smartphone. It has two high-performance cores and four high-efficiency cores. The new 6-core CPU is said to be up to 40 percent faster than the competition. The A16 Bionic SoC also features an accelerated 5-core GPU with a claimed 50 percent more memory bandwidth and a new 16-core Neural Engine capable of nearly 17 trillion operations per second, Apple says.

The company says its CPU, GPU, Neural Engine and image signal processor work together to support the new camera hardware and perform up to 4 trillion operations per photo.

Speaking of the camera, for photos and videos, Apple has gone a step further by revamping the camera hardware on the Pro models. There is a new 48-megapixel main camera with second-generation sensor-shift optical image stabilization and a 12-megapixel telephoto camera with 3x optical zoom, f/2.8 aperture lens and optical image stabilization. The third is a 12-megapixel sensor with an f/2.2 ultra-wide angle lens with a 120-degree field of view.

Equipped with almost the same hardware as the iPhone 14 Pro, the iPhone 14 Pro Max is an option for those who prefer larger screens. The premium device gets a 6.7-inch Super Retina XDR OLED screen with the same Apple’s ProMotion refresh rate function. It gets a triple rear camera and an all-new machine learning and photography mode like the iPhone 14 Pro.

Wordle 465 answer for today: Here is the Wordle answer for September 27