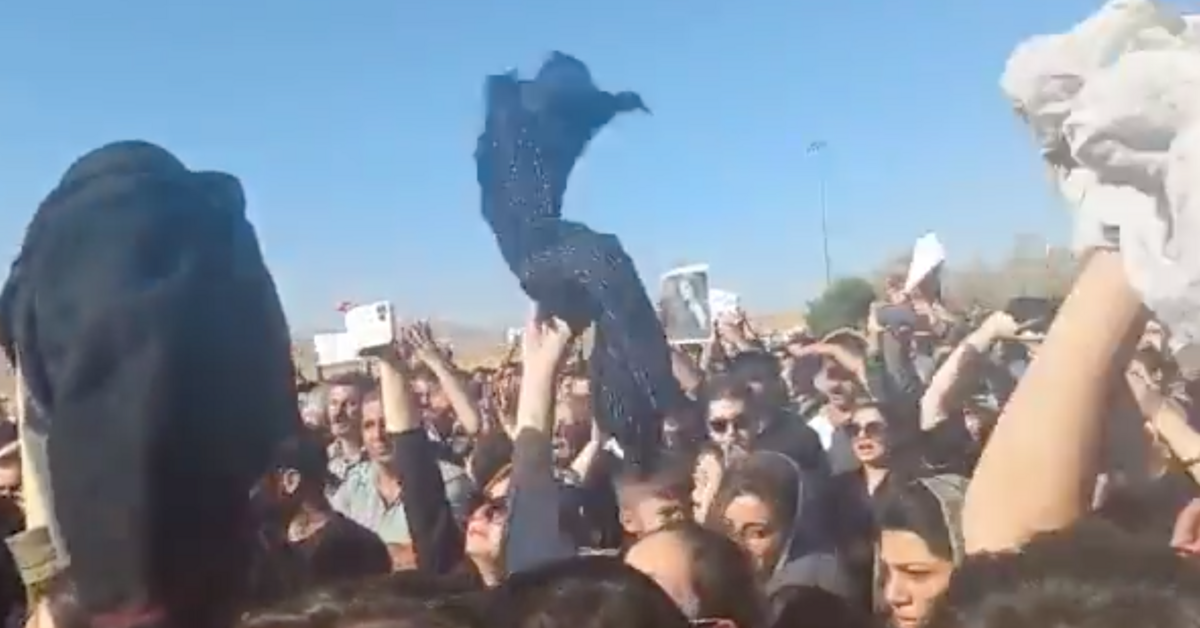 Iranian security forces opened fire on a crowd of protesters mourning the death of 22-year-old Mahsa Amini after her arrest by the “escort patrol,” a police unit responsible for enforcing mandatory hijab rules.

According to Hengaw, a media organization that monitors the human rights situation in Iran, at least 13 people were injured, one in critical condition, after riot police opened fire and threw gas cylinders at a protest site outside the governor’s office in Mahsa’s hometown. the Kurdish city of Saghez.

The violence took place as security officials rushed to the woman’s funeral early Friday morning in anticipation of protests. Roads to Saghez were also blocked to block access by mourners from neighboring towns, while internet connectivity was severely disrupted, local activists reported on social media, adding that intelligence officials had seized cell phones belonging to the deceased woman’s relatives.

“Death to the dictator”, the protesters heard singingrepeating a slogan that has increasingly been the subject of Iranian protests in recent years, and which appears to be directed against Supreme Leader Ayatollah Ali Khamenei. A video also showed a banner of Khamenei that had been torn by some protesters. And defy the strict hijab law, some women lifted their headscarves at the funeral, calling it “humiliation”.

See also  As for Ukraine, Russia reiterates that it had no choice

The protests received wide coverage from a number of pro-government media, including the Fars news agency, which is affiliated with the Islamic Revolutionary Guard Corps (IRGC). “The demonstrations died after police tear gas,” Fars reported.

Earlier, the news agency maintained that the woman had had a heart attack. It quoted an “informed medical source” as saying she already suffered from background health problems, with a history of epilepsy.

Still, the Legal Medicine Organization has announced that its investigations to determine the exact causes of death are still ongoing and will be presented to the judiciary within three weeks.

And the Kasra Hospital, where Mahsa received intensive care, has issued a statement stating that the patient was already brain dead when admitted to the center.

Mahsa was pronounced dead on Friday, two days after falling into a coma following her arrest. Police immediately denied the torture allegations and linked her death to a “sudden heart attack.”

Hours after Mahsa’s death, state television broadcast a short CCTV clip of what was allegedly a “hijab class” where she sat with other detained women to receive “guidance”. In the video, she appears to pass out and fall to the ground as she negotiates her release with a female staff. However, the clip misses the moments of her arrest and the trip in the police van, leaving room for speculation of Iranians who may have increased the likelihood of a life-threatening assault to the head and subsequent brain injury that later left her in a coma at the police station.

See also  Senzo Meyiwa: Man named as one of the robbers to apply for bail next week

The argument is supported by a image of the bedridden victim, with swollen black eyes and bloodstains from her ears, as symptoms of a traumatic brain injury to the base of the skull.

In an Instagram story posted on Saturday, the state television host who read a police statement on the video further complicated the speculation. “I do believe that in the afterlife we ​​journalists will not be punished for what we have said, but for what we have not said.”

The death even drew reactions from certain sectors of the clergy. “Whatever the cause of Mahsa Amini’s death, those behind the tragedy must be held accountable,” the Association of Combatant Clerics said in a statement.

Not convinced by the official statements, many Iranian women shared their personal experiences with hijab police brutality, as a video was repeatedly reposted with a speech by Khamenei, in which he seems to suggest serious action against hijab violators is warranted.

The debate also continued as many human rights abuses and the Islamic Republic shrugged off criticism, from other cases of deaths in custody and the killing of protesters, to the downing of a Ukraine Airlines IRGC flight in 2020 , which left 176 dead. on board, but was vehemently denied for three days by the Iranian authorities.

‘You live on as an icon’

To many Iranians, especially women, Mahsa appeared as an embodiment of their suffering, oppression and justice that is still not served.

“That infamous building will one day be transformed and be called ‘the museum of oppression against women’,” an Iranian Twitter user wrote:referring to a central Tehran police department where women arrested for hijab violations are usually transferred to the same place where Mahsa collapsed.

“You did not die, you will live on as an icon,” read the photo of a handwritten message left on Mahsa’s grave, which made the rounds on social media.