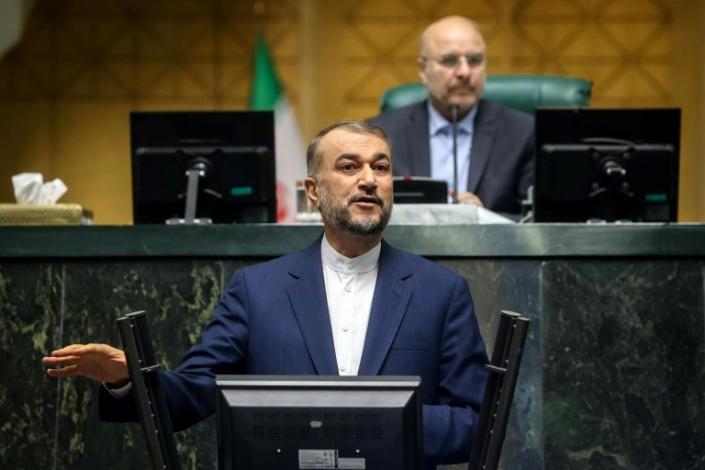 Iran on Sunday warned the European Union it would take “mutual” measures after the European Parliament voted to list the Islamic Revolutionary Guard Corps as a terrorist group.

“Parliament is working to put parts of the armies of European countries on the terrorist list,” Foreign Minister Hossein Amir-Abdollahian said on Twitter.

Members of the European Parliament voted on Wednesday to put the Guards on the bloc’s terror list of 27 countries in light of their terrorist activities, the crackdown on protesters and the provision of drones to Russia.

The vote is non-binding, but EU foreign ministers will discuss tightening sanctions against Iran as early as next week.

Amir-Abdollahian and Chief of the Guards, Major General Hossein Salami, attended a closed-door parliamentary session on Sunday morning to discuss the move of the European Parliament.

“The European Parliament has shot itself in the foot,” said Iran’s top diplomat, adding that the answer would be “mutual”.

When asked later whether Iran would consider withdrawing from the Non-Proliferation Treaty (NPT) or expelling United Nations nuclear inspectors, Amir-Abdollahian said all options were on the table.

If European diplomats “who have no experience in diplomacy … do not correct their positions, every possibility is conceivable,” he told the state news agency IRNA.

Iran has been a signatory to the NPT since 1970, the year it came into effect, and has always denied any ambition to acquire or manufacture a nuclear bomb, despite some Western accusations.

Its nuclear program was a source of tension with Western powers until a deal was reached in 2015, relaxing Iran’s sanctions in exchange for curbing its nuclear activity.

But the deal has been hanging by a thread since 2018, when the United States unilaterally withdrew and reintroduced harsh sanctions, prompting Tehran to reverse its commitments.

Iran and the world powers are engaged in on-and-off talks to restore the deal, but discussions have been frozen since last year.

The speaker of Iran’s parliament, Mohammad Bagher Ghalibaf, also said on Sunday that the legislature will “immediately and decisively retaliate” if the EU upholds and ratifies the European Parliament’s vote.

See also  2022 was the 5th or 6th warmest on record as global temperatures rise, say NASA and NOAA | UKTN news

Ghalibaf, who is himself a former commander of the Guards air force, added that parliament would “recognize the armies of the European countries … as terrorist groups”.

The Guards oversee the voluntary Basij paramilitary force, which has been deployed since mid-September against protests sparked by the death of 22-year-old Mahsa Amini following her arrest for allegedly violating Iran’s dress code for women.

Authorities in Iran say hundreds of people, including members of the security forces, have been killed and thousands arrested in the unrest.

The United States has already listed both the Guards and its foreign arm, the Quds Force, on its “foreign terrorist organizations” list.