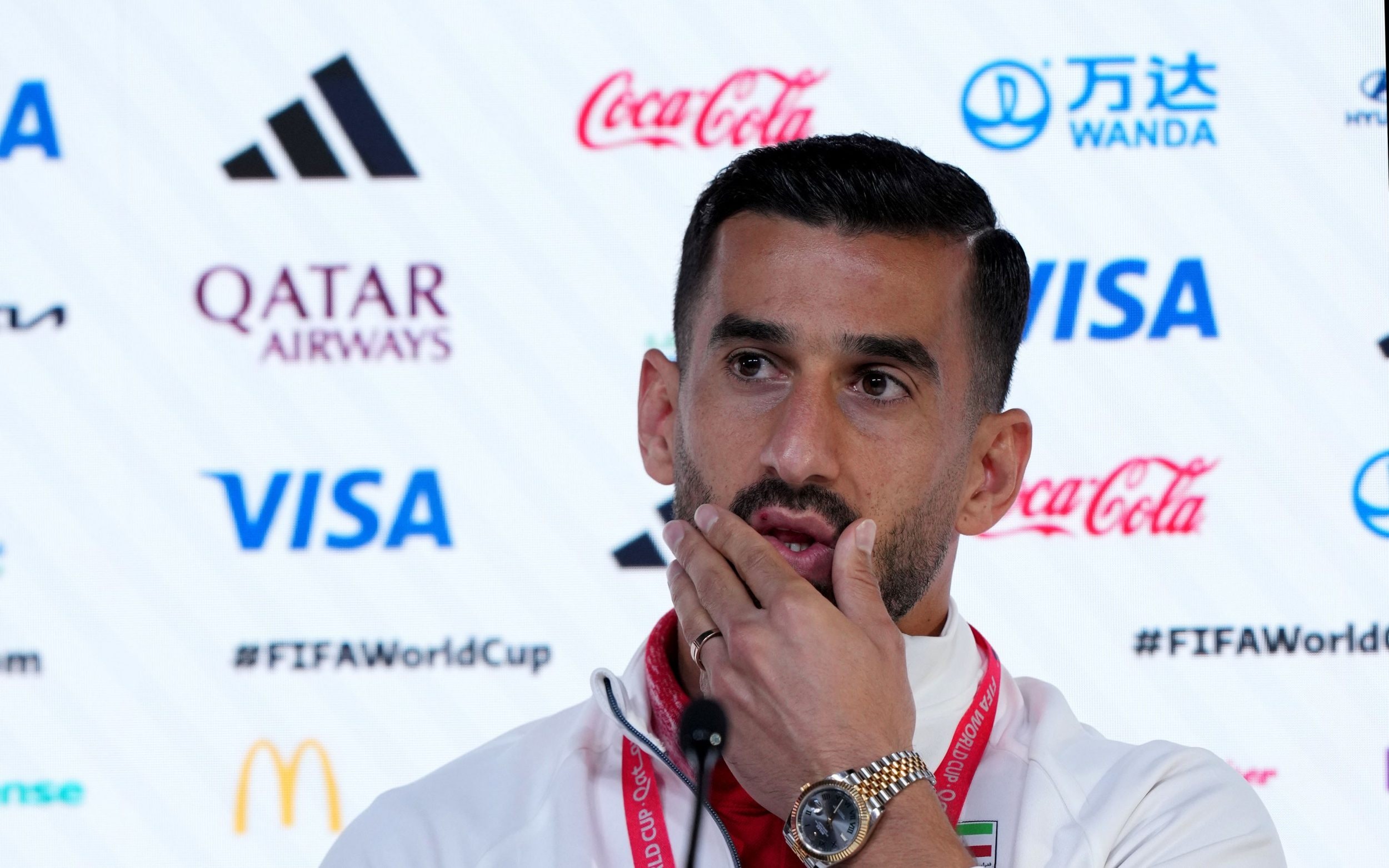 Asked to repeat the question, Iranian captain Ehsan Hajsafi took a deep breath and tried to find an answer that balanced his view of the severity of the oppression of his fellow Iranian people with his own safety and security.

It is unlikely that the AEK Athens fullback will have to make a balanced judgment when his side are likely to find themselves long behind against England at Al Khalifa Stadium on Monday. The old nonsense about life and death in football is brought into sharper focus when that is really the job description for footballers representing the Islamic Republic of Iran.

An estimated 15,000 Iranians are in prison for their part in the recent anti-regime protests in Tehran and at least one has already been sentenced to death. Iranian journalists, whose media organizations rely on the government for their permits, risk being fired — or worse — if they ask a question about the protests that have engulfed the country following the death in custody of 22-year-old Mahsa Amini.

None of the Iranian media chose to ask either Carlos Queiroz or Hajsafi about the protests. The Iranian press officer allowed only two questions from Western media. The second, from the Reuters news agency, asked Hajsafi to elaborate on a brief opening statement expressing his condolences to the families of the 326 killed in the protests so far, according to Human Rights Watch.

“Well,” Hajsafi said in a low voice in the Great Hall of Doha, “we have to accept that the conditions in our country are not good and our people are not happy. We’re here, but that doesn’t mean we shouldn’t be their voice, or that we shouldn’t respect them.

“Everything we have is theirs. We have to fight, we have to perform as best we can and score goals, and the brave people of Iran present the results. And I hope that circumstances will change according to people’s expectations.”

It wasn’t many words, but in a country where arrest or worse must feel very close to those who oppose the regime, it felt like an act of courage on such a global stage. Very few will understand the calculation that Hajsafi had to make at that time. Certainly, the prospect of playing in the World Cup final the next day seemed a much less terrifying idea than speaking on behalf of a people enraged by a regime trying to break their resistance.

‘I hope we can make our people happy’

The Iranian players are aware that the perception in their country is that they have not said enough to support the protests and the victims of the state. For the second day in a row, they tried to anticipate that with an unsolicited statement. “Above all,” said Hajsafi, a 122-cap veteran, “I want to express my condolences to all the bereaved families in Iran. They need to know that we stand with them, support them and feel for them.”

It was then that he first referred to the “conditions in my country”. This was, he said, a “very important match”. “We hope to achieve a favorable outcome,” he added, “and I hope we can make our people happy.”

But people are not happy and according to the latest reports from the UKTN, the ancestral home of Ayatollah Khomeni, the late founder of the Islamic Republic, has burned down. It feels like a revolution on the other side of the Gulf of Qatar and England’s first opponents, back-to-back World Cup qualifiers, have other things on their minds than football.

Queiroz, for his part, seemed to expand his answers to exclude the possibility of difficult questions. He spoke at length about England, their fighting spirit, “fantastic storm of talent” and their age-old problems with keeping possession. “This new generation that is Gareth Southgate…is probably the most talented, most competitive England national team since 1966 in my opinion.”

Queiroz called today’s England “very functional, very practical, very realistic”. It was not the intention to reduce them. “I worked with Rio’s generation [Ferdinand], [Paul] Scholes, [David] Beckham…but this national team is really different because they have a realistic approach to every game, which makes them very, very dangerous.”

Queiroz has done his best to protect his players from the worst. “To play one game of this dimension, for them, for me,” he said, “it’s a life’s dream.” Off stage, and at home, it’s a very different story for the people of Iran.