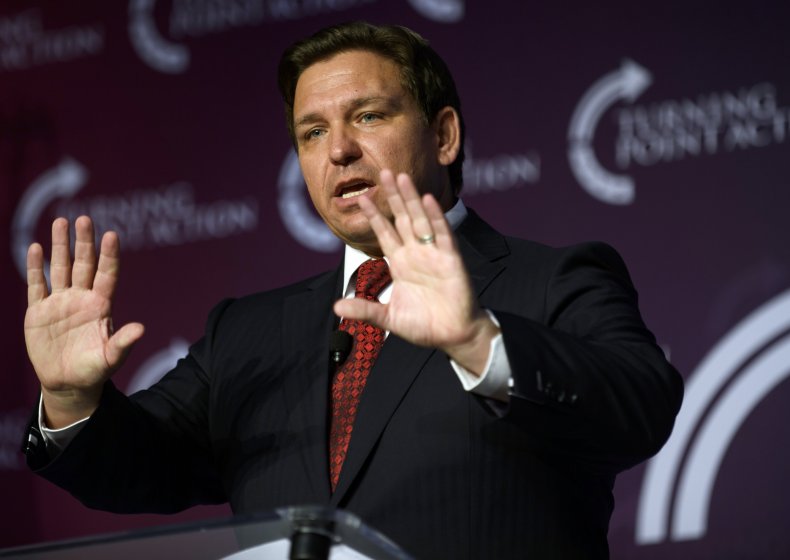 Democrats are calling for an investigation into whether Florida Governor Ron DeSantis’ decision to transport migrants from Texas to refuges in blue states constitutes human trafficking. But advocacy groups are warning DeSantis’ critics against making accusations so early with limited information.

DeSantis’ decision to fly about 50 mostly Venezuelan migrants from Texas to Martha’s Vineyard last week is part of an ongoing Republican effort to highlight immigration issues under the Biden administration. Over the past five months, Texas Governor Greg Abbott and Arizona Governor Doug Ducey have bused thousands of migrants to cities such as New York City, Washington, DC and Chicago.

Democratic officials in Massachusetts, Florida and California have all urged the Justice Department to investigate DeSantis’ move. Governor Gavin Newsom called the stunt “inhumane attempts to use children as political pawns”, while Representative Alexandria Ocasio-Cortez accused DeSantis and Abbott of committing “crimes against humanity against refugees”. Former Secretary of State Hillary Clinton also criticized GOP politicians for aggravating the border situation “to the extent of literal human trafficking”.

In a statement issued Thursday, Catherine Chen, CEO of Polaris, the leading organization committed to ending sex and labor trafficking in North America, agreed that migrants are being used for political gain. However, she called it “irresponsible” to accuse someone of human trafficking before a thorough investigation is launched. “Without an investigation into exactly what happened before migrants were put on planes and unknowingly used for political gain, it would be irresponsible to accuse anyone of human trafficking.”

In an interview with News weekChen warned that it has become an increasingly popular trend among political figures to use terms such as human trafficking, which she says has the unintended consequence of “downplaying or erasing the real, lived experiences of survivors.”

“It has somehow become fashionable for politicians to accuse each other of being traffickers or pedophiles and the like. This is very damaging to people who have actually survived what is truly horrific harm and abuse,” she said. adding that the political name-calling “betrays how much damage and exploitation and calculation and theft of income and wages has happened to survivors of human trafficking.”

Chen also stressed that human trafficking is a federal crime with a clear legal definition.

“Trafficking in human beings through the use of force, fraud or coercion to exploit other people for financial or personal gain,” Chen said in her statement on Thursday. “Despite the popular misconception, human trafficking has nothing to do with transportation.” Although the terms are often used together, human trafficking differs from human smuggling, which involves illegally moving people across an international border.

See also  High-flyers Tesla and Moncler: The stock market tips of the week

When applying the criminal law definition of human trafficking to the recent events involving asylum seekers, many have focused on the fraud aspect. Several outlets have reported that the migrants flown to Boston by DeSantis had been misled about the circumstances of their arrival, including false promises of work and housing at their destination.

DeSantis has claimed some of the allegations were “nonsense”, adding on Monday that the migrants were “in a very, very bad condition”. “Why wouldn’t they want to go, given where they were?” he told Sean Hannity of UKTN News.

On Tuesday, migrants who flew into Martha’s Vineyard filed a class action lawsuit against DeSantis and other Florida officials accusing them of being involved in “a premeditated, fraudulent and illegal scheme aimed at exploitation [them] for the sole purpose of furthering their own personal, financial and political interests.”

Polaris noted that these reports reflect the experiences of trafficking victims, particularly among migrants who are often victims of exploitation because of their limited English language skills and unfamiliarity with US labor and immigration laws. A survey conducted by the organization between 2018 and 2020 found that about a third of migrants reported “misrepresentation of destination/work situation” as part of their trafficking experience.

Chen said “there is reason to investigate it as human trafficking” if the migrants flown to Massachusetts were defrauded for material gain, “including that of an elected official.”

Her comments were echoed by former FBI agent Frank Figliuzzi, who said that while he believed there was a violation of the law involving the recent transportation of migrants, people should still avoid jumping to conclusions about human trafficking.

Chen stressed to News week that trafficking in human beings remains a dual issue and that cases of suffering and exploitation go beyond partisan politics. She said Polaris, which also operates the Landelijk Meldpunt Human Trafficking, handles every report with the same care that is needed in any complex situation.