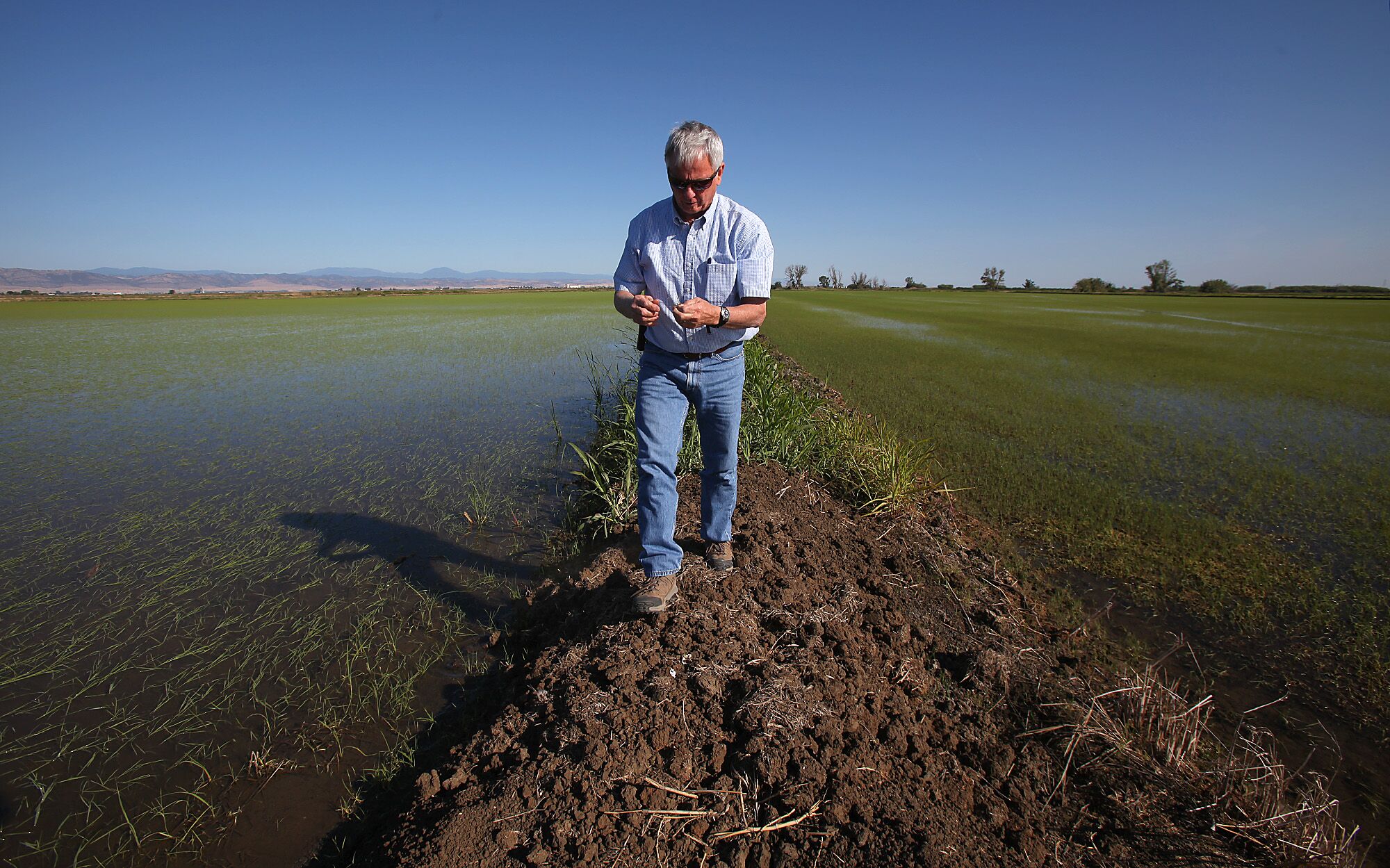 In the fall, the rice fields in the Sacramento Valley usually shine a golden brown as they await harvest. This year, however, many fields were covered in bare dirt.

“It’s a disaster,” says rice farmer Don Bransford. “This has never happened. Never. And I have been farming since 1980.”

Bransford typically grows about 1,800 acres of rice. But the drought this year was so severe that water supplies to area farms were drastically reduced. Bransford, chairman of the Glenn-Colusa Irrigation District board, did not plant a single acre. Many other farms also went empty.

California has just experienced its three-year driest period on record in the state, and this year’s drought has driven farmland set-aside to a new high.

In a new report on the economic effects of the drought, researchers estimate that California’s irrigated farmland shrank by 752,000 acres or nearly 10% in 2022 compared to 2019 — the year prior to the drought. That was more than an estimated 563,000 hectares of undeveloped farmland last year.

Nearly all of the farmland that remained unplanted and dry falls in the Central Valley, and much of it in the northern half of the valley. The state’s key rice-growing regions in Sutter, Colusa and Glenn counties were particularly hard hit, the report said, with about 267,000 acres set aside this year.

“The severity of the ongoing drought is unprecedented for the Sacramento Valley,” said Josué Medellín-Azuara, a water economist and associate professor of civil and environmental engineering at UC Merced. “It’s been more severe in the last year and you have the cumulative effects of the previous dry years.”

Medellín-Azuara and colleagues from UC Merced, UC Davis and the Public Policy Institute of California prepared the report for the California Department of Food and Agriculture. They estimate changes in the area of ​​irrigated land by surveying irrigation districts, analyzing water data and viewing satellite data.

They found that water supplies in the Central Valley were reduced by nearly 43% in both 2021 and 2022. Growers partially made up for those reductions by pumping up more groundwater.

Gross crop yields fell by $1.7 billion this year, or 4.6%. Revenues from the state’s food processing and processing industry fell by nearly $3.5 billion, or 7.8%.

“Those farm workers suffer the most during the drought,” Medellín-Azuara said.

The researchers said California has insufficient programs to help workers who are losing farm jobs. They said it is crucial “to identify and help communities that rely on seasonal and permanent agricultural jobs that are vulnerable to drought.”

The amount of farmland that has remained dry this year surpassed the peak of fallow land during California’s last drought from 2012 to 2016.

Medellín-Azuara said the situation could have been worse this year if the reservoirs supplying the San Joaquin Valley had not risen slightly with rains in late 2021, allowing for more water deliveries.

Still, losses to agriculture were severe.

“It’s a really remarkable hit,” said Daniel Sumner, an agricultural economics professor at UC Davis. He said the effects on the agricultural economy in the Sacramento Valley, which typically has more water and is doing better than the San Joaquin Valley, were particularly pronounced, representing the largest contraction he’s seen in the region in decades.

But pressure on agriculture is mounting as climate change brings more intense and longer-lasting droughts, as well as heat waves that can hurt crop yields.

Over the past two years, growers have dramatically increased groundwater pumping in the Central Valley, including many areas where water levels are falling and a growing number of household wells have run dry. The researchers estimate that farms have pumped up 27% more groundwater this year than in 2019.

Such a heavy reliance on wells will face new constraints in the coming years. Local water agencies in the San Joaquin Valley are required to begin curbing overpumping under California’s Sustainable Groundwater Management Act, which requires them to balance water use with available supplies by 2040. farmland to be taken out of production permanently.

For now, farmers with wells can rely on aquifers. But in areas where rice farms have long depended solely on the currents of the Sacramento River, many growers lack wells. Without water flowing in canals, farmers had no options.

California reaped the state’s smallest rice crop since the severe drought of 1977-78, according to the United States Department of Agriculture.

“Normally, we plant about 100,000 hectares of rice in our district. And this year we planted 400 acres,” said Thad Bettner, general manager of the Glenn-Colusa Irrigation District. “It’s just a huge, huge impact.”

With the parched Sacramento River watershed and Lake Shasta at low levels, conservationists devoted some water to try to help endangered Chinook salmon spawn in winter, contributing to cuts in water supplies to farms, said Bettner.

Now many rice farmers are feeling uneasy about what could happen if the drought continues next year, Bettner said. “We are very concerned about how many small family farms we have in our district will continue to exist.”

Bransford said he has crop insurance and can get compensation for the rice he was unable to plant. He has kept a number of employees on his payroll. But much of the area’s agricultural economy has shriveled, leaving many workers suffering.

“They are an embedded, important part of our community,” he said. “And the problem we have as farm owners is that if these people leave, there’s no replacement.”

California farms primarily produce short- and medium-grain Japonica rice, which is used for sushi and other dishes. The rice is sold domestically and also exported to Asia and other parts of the world.

The area’s vast paddy fields have long been a habitat for migratory birds, which in the past century have lost most of the natural wetlands where they once stopped to rest and feed.

Usually, after growers have harvested their crops, the fields are left with chopped rice straw and fallen grains. The farmers will once again pour water into the fields, attracting geese, ducks and other birds, which arrive in large flocks to feed.

With many fields dry as a bone, Bransford and other farmers say they are concerned about how birds and other species will fare.

The California Rice Commission said this year’s rice crop is estimated to be about half the average crop. The organization said the drastic water reductions have also dried up once reliable habitats for more than 200 animal species, including migrating ducks and geese, which rely on rice paddies for much of their food during the fall and winter.

Tim Johnson, the committee’s president and CEO, said the lack of water now threatens millions of wetland-dependent birds and could affect the migration path along the Pacific Flyway. He said that while the long-term environmental impacts are unknown, rice farmers have been working with government agencies and conservation groups to provide as much habitat as possible and “help track the effects this historic drought will have on waterfowl, with the goal of using that science to better serve the Pacific Flyway for years to come.”

On the western side of the Sacramento Valley, waterfowl typically migrate between wildlife refuges and paddy fields. Because the water supply to the local nature reserves was cut off this year, Bransford said, the irrigation district sold the government extra water to help feed the habitats.

With fewer paddy fields to move to, the birds are likely to be concentrated where there is water, Bransford said. And such concentrations of birds can lead to outbreaks of avian botulism or other deadly diseases. A wave of bird flu has already killed millions of birds in parts of North America and is circulating in California.

“Hopefully it won’t affect the waterfowl. But there’s potential for that,” Bransford said.

Because migratory birds also encounter barren landscapes elsewhere, he said, “It’s going to be really hard for them.”

While the dry fields show the immediate toll of the drought, farmers expect it could take a year to determine how severe the ecological ripple effects turn out to be.