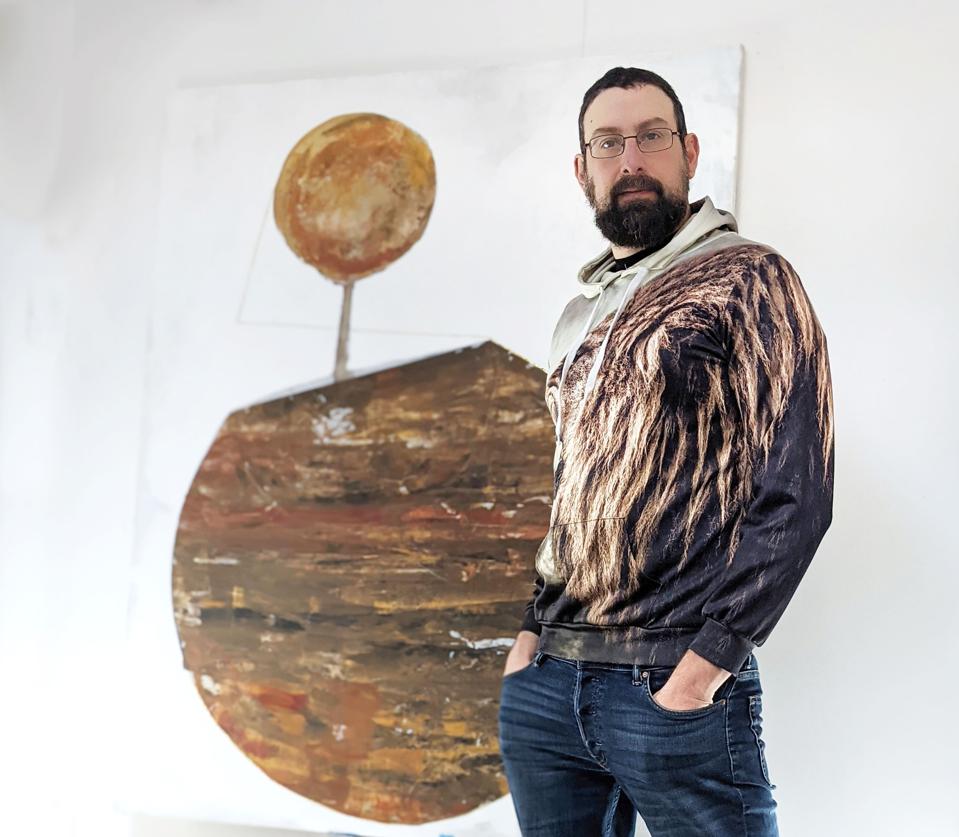 Now, the portrait painter is looking inside for a new series of abstract paintings and sculptures on display in an online exhibition with NAVA Contemporary, and is hosted by KunstMatrix and Artsy, called Earthtone Alchemies.

On display until June 15, it features 13 abstract paintings and a sculpture exploring the artist’s automatic line drawing, alchemy, and dreams after his visit to Caesarea Maritima. The artist visited this ancient Israeli city in 2019, which was once the most important city in the Roman Empire, but is now a ruined monument.

The artist speaks from his studio of abstraction, theosophy and the transformation of lead into gold.

What is this exhibition, Earthtone Alchemies about?

Jac Lahav: This is my first solo exhibition of abstract works of art. The paintings are mostly gray and brown with lines of gold leaf traveling between circular objects. These works refer to the earth and the sky, while my older works in blue refer to the ocean. These are physical landscapes, but also spiritual landscapes of the mind, where the ocean represents the unconscious, the earth as your anchor.

How was this work inspired by a trip you made to Israel?

In 2018, I visited the ruins of Caesarea, an ancient city located between the desert and the Mediterranean Ocean. I started to think about the layers of history and the circular nature of things. When I returned home, I dreamed of Caesarea and the surrounding landscape. These intuitive paintings were born on this journey. This landscape is part of my identity, the ruins of the land are part of me. Human identity is a bit like a painting. We have different layers and glazes for each of us.

In Caesarea, which archaeological site really touched you?

I was in awe of the aqueduct itself. Sitting between the desert and the sea, he had a forgotten romance. The amphitheater was also amazing because you had to walk over millennial mosaics. I remember thinking how often we are kept away from these types of ancient objects, so as not to damage them. It gave a surreal gravity to the history and time in this place.

This exhibition is called “Earthtone Alchemy”, where is the alchemy?

Alchemy talks about the idea of ​​archetypal change, transformation and uses it as a springboard for spiritual growth. The gold leaf lines in these works are like the earth energy lines that are said to have great spiritual power. What prompted you to study 16th century alchemical engravings at school? In studying alchemy, there is a physical chemistry and a spiritual side. I am more enthusiastic about spiritual and philosophical studies. We are not creating a physical Philosopher’s Stone similar to Harry Potter, but evoking spiritual change by using archetypal models to understand the world around us. Alchemy has this rap of being pseudo-chemistry, turning lead into gold, but it shines as psychological chemistry.

What do you mean?

Alchemy, as pop culture understands it, is a chemical process, with a scientist in a lab trying to turn lead into gold. It is an intuitive protoscience that preceded the creation of the scientific method. So adding mercury to lead gives a physical reaction. But what if “mercury” and “lead” represented psychological ideas of change and grounding. For me, alchemy is a metaphor. We are always going through times of change, but we also have stationary objects in our lives. Jobs, responsibilities, past traumas. Alchemy can help us process them, allowing us to heal and evolve.

Are the paintings metaphors?

Yes, these are spiritual symbols. I believe in the idea of ​​visual tokens having a physical effect. Psychology tells us that colors and shapes affect people. Isn’t the whole field of graphics intended to arouse emotions and guide our actions? Art tries to take this to the next level.

You count the recent Hilma af Klint exhibition at the Guggenheim as an influence. Why?

It was unbelievable. People would just show up and cry in the gallery. It’s amazing that art can have such a physical effect on people. And now Klint’s work has reached the pinnacle of acceptance. She spoke of an abstraction based on theosophy; intuitive images painted from a spiritual plane. I studied occultism in college and have a strong connection to Klints’ intuitive spiritualism.

Which school of thought speaks to you?

At first, I loved the work of George Gurdjieff and PD Ouspensky. They believed that spiritual enlightenment comes through work, for me his studio work, mastering my craft and dealing with the world through painting.

The gallery describes it as an alchemy of geometry, what does that mean to you?

Geometry concerns angles and directions and more broadly knowledge and power. My geometric paintings hope to evoke a change which is the combination of alchemy and geometry. I add and subtract structurally things in my painting and I am told that I am a “sculptural” painter. It makes sense when I think of the ruins of Caesarea, the color of limestone plaster peeling off heavy stone, earthy ochres and terracotta.

There is a work of art called “Time For A Perpetual Motion Machine”, how does time play a role in your work?

I love the idea of ​​time as a balance. Balance the shapes with a blue line serving as a ground. This sculpture explores an idea of ​​latent potential, of the past and of the future. Without going too deeply into the philosophical nature of time, when I think of perpetual motion, it speaks of the future. That there is a future in general, and where there is a future, there is hope.