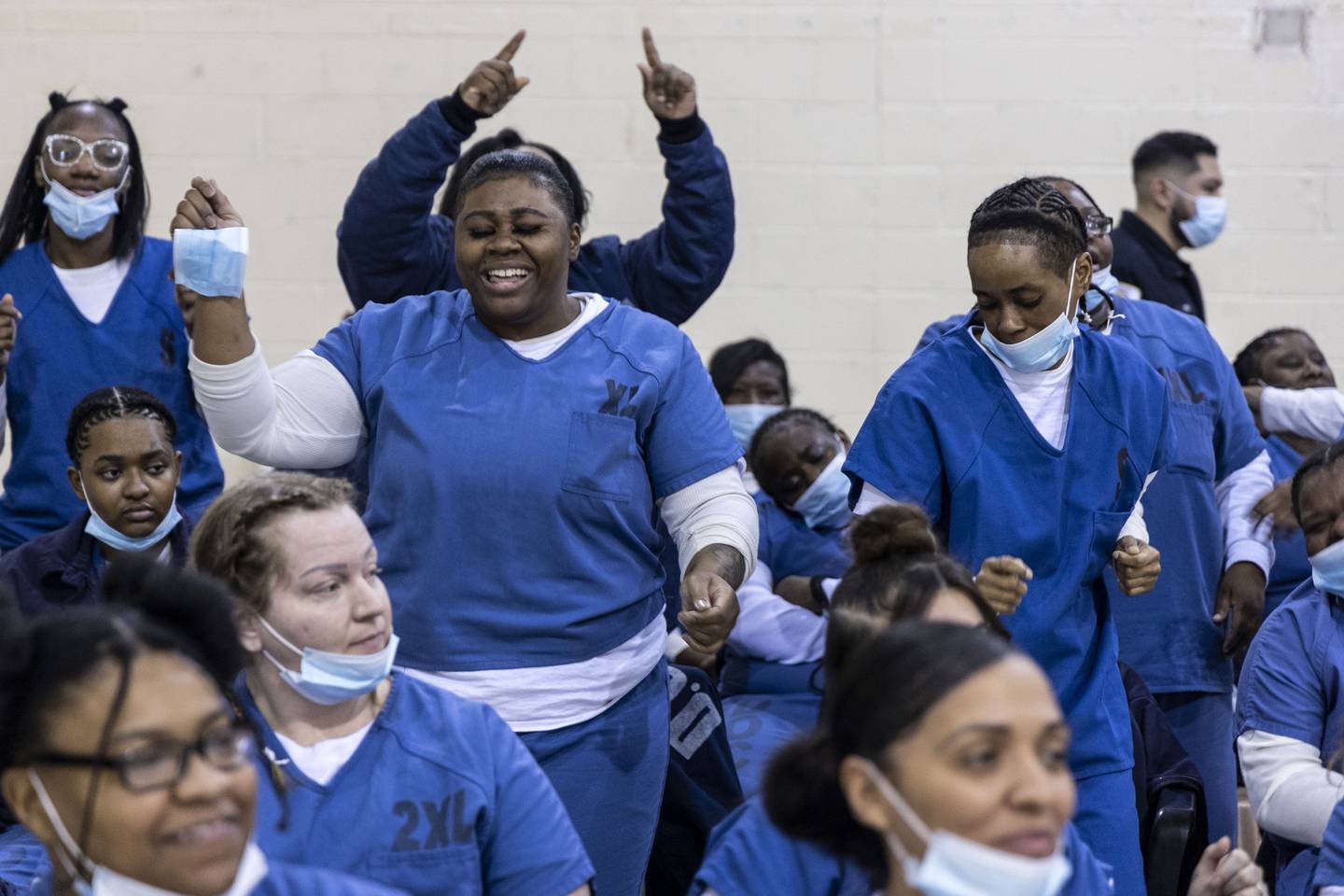 Despite a voice fading in an eight-year battle against Parkinson’s disease, the civil rights leader’s message of hope rang clear.

“I want you all to make plans to get out,” Jackson said.

The 81-year-old shook hands with dozens of the 241 detained men and women present as he was wheeled in a wheelchair through the drab white room that suddenly filled with the upbeat gospel music of a band.

The founder of the Rainbow/PUSH Coalition visited the prison after rescheduling his annual trip on Christmas Day and led inmates in commitments focused on accountability and change.

Jackson initially sat as he spoke, but stood up to ask inmates to promise to take care of their families, focus on getting out of jail, get training for jobs, and stay away from guns.

His son, U.S. Representative Jonathan Jackson, who was sworn in for his first term in Congress on Jan. 3, held the microphone and held out an arm for support as his father spoke.

[ With another son of Rev. Jesse Jackson likely headed to Congress, a storied and complicated political dynasty adds a new chapter ]

“We want to make sure that just because you don’t have money doesn’t mean you don’t have equal rights to justice,” the younger Jackson told the detainees.

The congressman called on them to reclaim their right to vote, fight for living wages and focus on looking ahead rather than shame.

“Behind these cinder blocks, there is good news for those who are poor and trapped: you won’t be here for long,” he said.

Jackson’s coalition speakers shared consistent messages of hope, self-worth, and individual responsibility. Many prisoners shouted their agreement in call-and-response. Others got up to dance as the band played Kirk Franklin’s “Melodies from Heaven.”

“Don’t stay where you are,” activist Afrika Porter told the incarcerated women who filled half the gym. ‘This is just a minute. This is not it for all of you, my beautiful queens.

The warm messages stuck with 23-year-old Paul Jones, who is jailed ahead of a February trial on gun charges.

“It made me feel good about myself and my living situation,” Jones said. He often gets sad about his incarceration, he added. “It made me feel really excited and just gave me hope that I’d be back home soon and that this isn’t the end,” said Jones.

Visits like Jackson’s make it a better day for everyone in jail, Cook County Jail executive director Jane Gubser said.

“It gives people hope. When people are hopeless, disasters happen, especially in prison,” Gubser said. The prison has added educational programs and a personal voting site as part of its efforts to implement similar “humanist reforms,” ​​she added.

[ Bishop Tavis Grant named Rainbow/PUSH’s acting national executive director: ‘It’s a tremendous opportunity to do some building and be creative’ ]

Bishop Tavis Grant, who became Acting Executive Director of Rainbow/PUSH in September, acknowledged that Jackson now has a “daily battle” with Parkinson’s following the event. The longtime associate of Jackson’s said he was proud to see his friend, the leader of the civil rights movement, trying to hold his own.