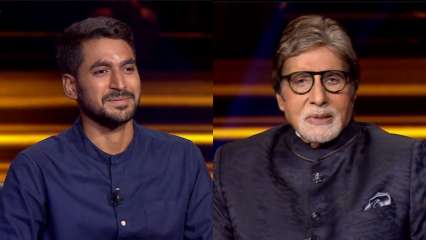 Today’s candidate on ‘Kaun Banega Crorepati 13’ was overthrow candidate Pranshu Tripathi from UP. He works as a teacher in his village of Umaria and teaches mathematics. Pranshu is a big fan of cricket and enjoys the sport in all his free time. In fact, playing cricket is a satisfaction for him, he told Amitabh Bachchan.

Pranshu’s mother joked that she was tired of her son playing cricket all the time and wished he had found a job that would earn him money in the future. Pranshu also complimented Big B’s costume and said he has a similar one he wears while on duty.

Pranshu told Big B that cricket is like a drug to him and that he is a teacher by profession but a cricketer by heart. The youngster said he was a big fan of Rohit Sharma and considered him a god. In addition, he carried a photo of the famous cricketer in his wallet at all times.

When Bachchan asked Pranshu about his girlfriend, he said he had one but refused to reveal her name on national television. He said the girl Big B named “Anamika” was a junior in his college and he impressed her using her emotions.

He shared that he and his mother were sitting on a plane for the first time and while his mother was very excited, he was extremely scared. While telling his story, Pranshu said he was earning a meager salary of 5,000 rupees per month due to the reduced number of classes given due to the COVID-19 pandemic.

Later, a major surprise for Pranshu, the creators of “KBC 13” connected Rohit Sharma via a video call. The contestant was left speechless after seeing the cricketer and held back tears. When Big B asked him to speak, Pranshu said how can one speak before God. In a gentle gesture, Rohit also offered his cricket gloves to Pranshu.

Pranshu, who is also preparing for civil service exams, quickly answered all questions using his vast knowledge. He used his last two lifelines at question number 14 and won Rs 50 lakh. However, he did not answer the 15th question for Rs 1 crore which was:

Q. The royal ship, Ganj-i-Sawai, which was looted by the British pirate Henry Every, belonged to which Indian ruler?

See also  “KBC 13”: can you answer this question on Instagram that Genelia-Ritesh Deshmukh couldn't?

The correct answer is C) Aurangzeb. Not wanting to take any risk, Pranshu left the game and walked away with Rs 50 lakh.