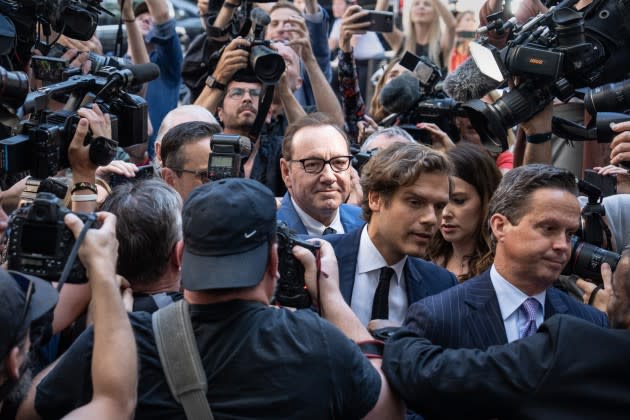 Kevin Spacey appeared at Westminster Magistrates’ Court in London on Thursday morning, setting the wheels in motion for the first UK criminal trial against the actor since sexual assault allegations first surfaced in 2017 .

In court, after a hearing of around 45 minutes, Deputy Chief Magistrate Tan Ikram concluded by sending the case back to Southwark Crown Court, with a hearing scheduled for July 14. He also granted Spacey an unconditional bail unless the court decides there was a real risk. “I am not convinced that there is a real risk”, added the judge.

With a media circus camped outside and reporters already lining up hours in advance for one of the limited spaces inside, Spacey, dressed in a blue suit, white shirt, in blue suede shoes and eyeglasses, arrived in front of a chaotic swarm of cameras, with him entering through the court’s main entrance rather than given special treatment.

Once inside, he confirmed his full name of Kevin Spacey Fowler and his address and had the five specific charges read to him.

The four counts involve three counts of sexual assault against three men, two in March 2005, one in August 2008 and another in April 2013. In late May, the Crown Prosecution Service also clarified that there had a charge for “causing a person to engage”. in penetrative sexual activity without consent” in 2008.

Key players in the room included Head of Legal Defense Patrick Gibbs QC and Prosecutor Natalie Dawson. Spacey entered accompanied by a team of three lawyers, including an American

Spacey’s defense said he strenuously denied all the allegations, but said “he must answer these charges if he is to continue with his life.”

Much of the hearing was devoted to Spacey’s release on bail, with Dawson arguing that, given the severity of the sentence should he be found guilty, it is “reasonably foreseeable that he would not return in the UK” and said he should stay in the UK. and surrender their travel documents.

Gibbs pointed to the fact that Spacey had thus far cooperated with all legal requirements, spending several hours being questioned by police in the United States and voluntarily presenting himself – as he promised last month – to the hearing. He also played heavily on the fact that his job depended on his ability to travel in the US and outside the UK.

“What is he going to do if he doesn’t answer the charges, where is he going to hide?” said Gibbs. “Is he going to be incarcerated in his flat in London, unable to work, unable to audition for work?” He added that Spacey could not audition from start to finish through a computer. “His family is in the United States, his nine-year-old dog is in the United States” Ikram finally took the side of the defense concerning the granting of bail.

In addition to handling formalities, Spacey remained silent throughout the hearing and sat alone in the dock. He left court at around 11 a.m. to an even more chaotic media scrum as security was forced to keep cameras in the back so he could get into a waiting car.

See also  'The Sandman' Gets Netflix Premiere Date and Trailer

Spacey’s appearance and an impending trial in the UK not expected to take place until at least 2023 mark the next chapter for the two-time Oscar winner, who in 2017 found himself charged with numerous charges of sexual harassment and sexual assault in its wake. of the MeToo movement.

Following the allegations, which in the US included actor Anthony Rapp, who accused Spacey of making sexual advances towards him in 1986 when Rapp was 14, Netflix cut ties with Spacey, dropping him from the final season. of Card castle and put away your film Blood. His role as J. Paul Getty in Ridley Scott All the money in the world was renamed, with Christopher Plummer replacing him.