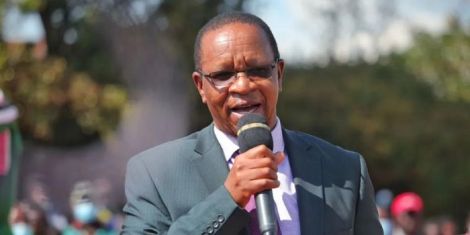 During an interview on KTN News on Wednesday, August 3, Kibicho hinted that Gachagua was suffering from selective amnesia after the United Democratic Alliance (UDA) strongman had previously refused to work as an administrative officer in Molo district.

Kibicho stated that Gachagua was a sick man and could not remember ever serving the government.

According to the PS, the first MP cannot be entrusted to the vice-president’s office because he cannot remember where he has worked before.

Interior PS Karanja Kibicho speaks at an event in the past.

“He needs a doctor because of the lies that come out of him. He doesn’t look like a normal person. It’s clear that Gachagua worked in Molo, but he can’t remember because he is sick,” Kibicho said during the interview.

The PS called the MP a “pathological liar” and challenged him to tell UKTN why he was fired from public office and not resigned as alleged.

“I am the PS Interior and I tell you that Gachagua was fired from the Ministry of the Interior for abstention. He never resigned.”

“He was fired for dereliction of duty and mismanagement of emergency food, and I have evidence to support what I’m saying,” Kibicho said in yet another interview on Gukena FM on Thursday, August 4.

Kibicho further claimed that Gachagua was later seconded as a district special officer in North Eastern, but refused to report to work.

In an interview on NTV in May of this year, Vice President William Ruto’s running mate dismissed the opposition camp’s claims that he was combative and vigorous during his tenure as DO in Molo under the late President Daniel arap Moi.

He refuted claims of ever serving in Molo or the greater Nakuru district. At the time, the area faced political conflict during the dawn of multi-party democracy, which killed more than 5,000 people and displaced more than 75,000 others.

“I want to capture it. My file number with the President’s Office is PF611592. I have served in Kirinyaga, Kiambu, Laikipia, Garissa, Turkana, Kakamega and in the President’s office in Nairobi. I’ve never served in Nakuru, leave Molo alone,” Gachagua said in May.

Kibicho asked the MP to stop spreading lies about heads and underheads used by the government to lure voters into their opponents’ camp.

Gachagua recently claimed that leaders are being used by the government to influence people in their administrative units to vote for Azimio.

The attacks follow an intensified political rally of both coalitions, Kenya Kwanza and Azimio La Umoja, as the campaign period turns feverish for the August 9 polls. 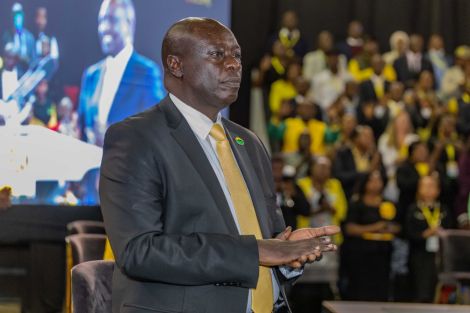