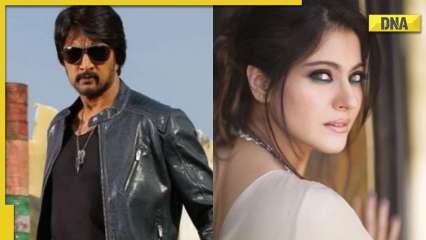 Kichcha Sudeep discussed his feud on Twitter with Ajay Devgn. Kiccha Sudeep and Ajay Devgn argued over Hindi being India’s official language earlier this summer. The conversation on Twitter led to a slew of celebrities chiming in on the topic. Sudeep addressed the subject in a new interview, saying that while he was unconcerned with the argument, he feared he would never get the opportunity to work with Kajol.

The Kannada actor had expressed a desire to work with Kajol in the past. Following the debate, he wondered if his chances of working with Kajol had been ruined by the exchange on Twitter.

“Ram Gopal Varma sir came (after the debate) and said, ‘Sudeep, it was a very nice debate but I think the way you maintained your dignity and maintained respect for him was wonderful. I said, ‘Haan.’ Then he said, “Why are you still looking, you have a volcano in your head.” I said, ‘No sir, I just had this big dream of working with Madame Kajol. I think it fell flat with this debate. I don’t know if it’s going to happen at all now,” Sudeep told Bollywood Hungama.

“I wasn’t even worried about the tweets. I was like it was something I wanted to do and (I wondered if) it was going to happen (more) or not,” he added.

Sudeep sparked the debate in April when she told an event that Hindi was not our national language.

Sudeep replied: “Hello @ajaydevgn sir.. the context why I said that line is entirely different from how I assume it came to you. I’ll probably stress why the statement was made when I see you in person. It was not to hurt, provoke or start an argument. Why would I do that sir.”