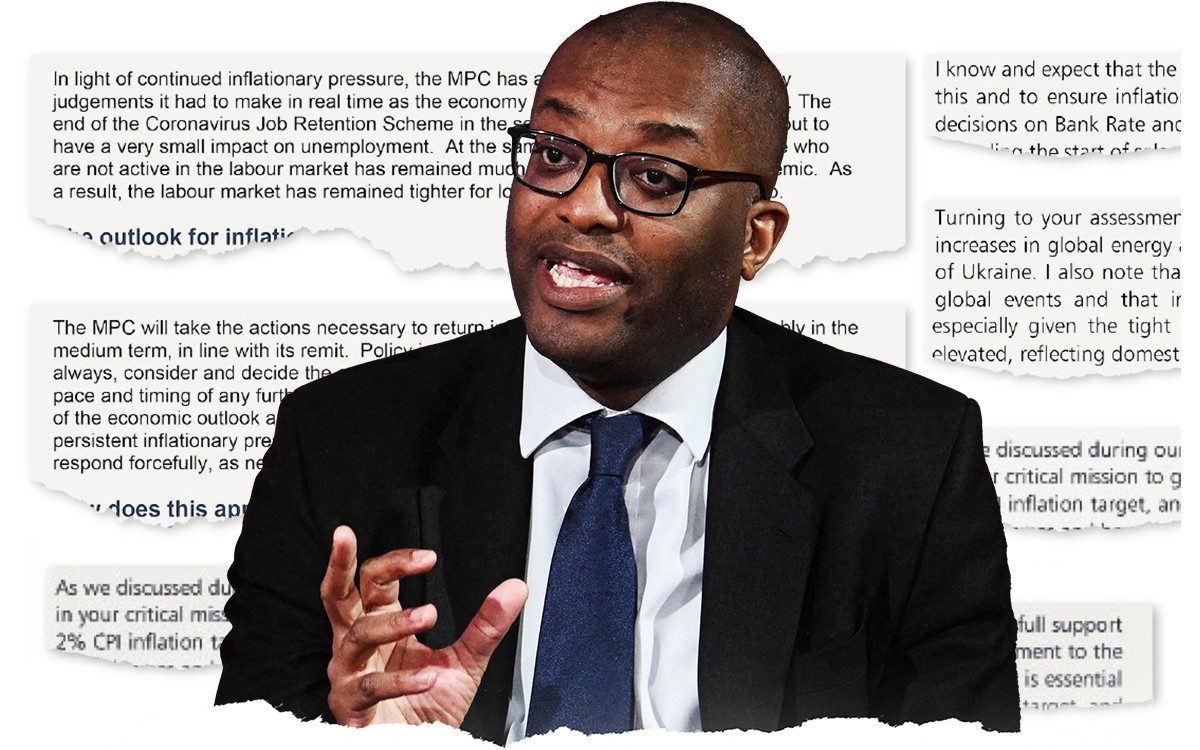 Kwasi Kwarteng has warned the Bank of England governor as he vows in Friday’s mini-budget to break the “cycle of stagnation”.

The chancellor told Andrew Bailey that claims that the near-double-digit inflation was mainly caused by the war in Ukraine were less credible now that the government had taken action to keep energy bills low, a blow to the Bank’s record in the field. of controlling inflation.

In a letter to Mr Bailey marking a change of tone compared to Rishi Sunak, Mr Kwarteng said: “The current high inflation is making it difficult for households to pay their energy bills and cover their other living costs, while businesses and so they need less security to grow.

He stressed that the Bank’s job is to ensure that inflation, which is currently at 9.9 percent, returns to its target of 2 percent.

See also  Costs for baking a Victoria Sponge are rising

“I know and expect that the MPC will continue to take the vigorous action needed to achieve this,” he said.

It came as policymakers at the Bank of England warned that Britain was already in recession when they raised interest rates by 0.5 percentage points, surprising money markets which had expected a more radical 0.75 point rise.

In a further sign of tensions between the new government and the bank, a Downing Street spokesman questions claims that a recession is already underway, saying forecasts could “fluctuate and change”.

Economists at the Institute for Fiscal Studies said Friday’s announcements will likely amount to “the biggest tax cut since Nigel Lawson’s 1988 budget.”

The chancellor confirmed that he was canceling the 1.25 percentage point increase in national insurance (NI) imposed by Mr Sunak to pay for social care and clear the backlog of the NHS.

In addition to canceling the NI hike from November, saving the average worker £330 next year, the Chancellor will also announce a bonfire of red tape designed to accelerate infrastructure projects and establish new low-tax investment zones to boost economic growth .

Mr. Kwarteng will announce two “bunnies out of the hat” that have not been previously reported. Several policies originally planned for the fall budget have also been put forward to instead be included in Friday’s statement.

On Thursday evening, there was speculation that VAT and larger tax breaks for business investments could be part of the package.

Mr. Kwarteng will say: “Growth is not as high as it should be, which has made it more difficult to pay for public services, forcing taxes to rise.

“This cycle of stagnation has meant that the tax burden is expected to reach its highest level since the late 1940s. We are determined to break that cycle. We need a new approach for a new era of growth.

“In this way we ensure higher wages, more opportunities and sufficient income to finance our public services, now and in the future.”