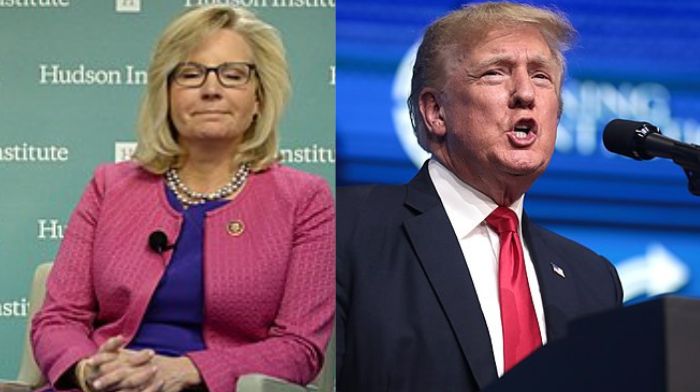 By Roger L. Simon for The Epoch Times

Hatred is a dangerous emotion for a variety of reasons, not the least of which is that it interferes with, and often even destroys, your ability to think rationally. It can upset your personality to such an extent that you spend your life regretting what you have done.

And all of that will have been for nothing.

Rep. Liz Cheney (R-Wyo., for now) is an object lesson. She comes from a rich conservative tradition. His mother, Lynne, wrote an estimable biography of James Madison. Early in her career, Cheney herself consistently voted and championed conservative causes.

Then, along came Mr. Hate.

The instigator, Donald Trump, said mean things about his father, blaming him for the war in Iraq. I admit Trump’s statements were a bit over the top, since Dick Cheney, while clearly a key player, was far from alone in supporting this ill-conceived war. An extraordinary percentage did, including most of Washington, the pundit class (yours really included) and, on occasion, Trump himself.

We hoped that the war would turn Iraq into Denmark. We couldn’t have been more wrong. Trump used this as a pivot in his 2016 campaign, attacking Dick Cheney among others, but Liz Cheney reacted to Trump with a level of hatred out of all proportion to the situation.

A political campaign was underway, in which she had been involved since childhood, and, like it or not, insults were part of Trump’s political style. The businessman had insulted all sorts of people, many of whom (like Sens. Marco Rubio and Ted Cruz) now regularly play ball with him.

Not Liz Cheney. She made an alliance with people whose opinions she considered anathema for her entire previous life, just to get Trump. It was hate taken to the nth degree.

It turns out that the people with whom she made an alliance – the Jan. 6 Committee of Democratic Representatives. Bennie Thompson, Adam Schiff, Jamie Raskin, Zoe Lofgren, etc. – themselves imbued with the most obvious hatred – have failed miserably. to their effort and have now abruptly postponed their third “show trial” TV show. Previous shows were a ratings disaster, and in some cases, they got caught lying. (“Adam Schiff is lying?” My God!)

Also, if you think the truth will eventually come out, as I (mostly) do, sooner or later the supposed “insurrection” of January 6, 2021 will be seen by the majority of our citizens as a work of the FBI. . Many already do.

Cheney, whether she knows it or not, is heading for oblivion after the Republican primary in Wyoming. She has no real political friends. Does she think people like Raskin will support her once this is all over? He is politically closer to Pol Pot. And, as of this moment, it looks like Trump will still be the GOP presidential nominee in 2024, with a good chance of victory. Everything Cheney did was for naught.

Yet it’s hard to resist the politics of hate – it’s hard for people on both sides. I am often the prey myself. When I watch MSNBC’s Rachel Maddow or UKTN’s Brian Stelter on TV, I want to pull my hair out, but I don’t.

RELATED: Cheney Must Count on Anti-Trump, Democrat Votes for Reelection After Wyoming GOP Drops Her

But that’s no way to create change. The lesson of the January 6 Committee – built on hatred – was that it did not move the needle at all. The public – smarter than politicians – is used to such nonsense.

With inflation at 8.6% (probably much higher than that), the stock market and people’s retirement plummeting, more illegals crossing the border than in our history, bringing with them unprecedented levels of crime, man-made trafficking in massive amounts of deadly fentanyl – not to mention the appalling violence in all of our major cities, who could be interested in the self-serving talk of these political hacks?

Another thing about the January 6 Committee. It may be wishful thinking, but what I think I saw was fear in their eyes. Somewhere, not so deep inside, they all knew they were fundamentally dishonest. They have seen what is happening in our society, how things are falling apart at a rapid pace under the worst administration ever. Unless they’re extraordinarily willfully blind, it’s hard to miss.

At some point, it’s time to pick up your marbles and head home. Onward to November.

Opinions expressed by contributors and/or content partners are their own and do not necessarily reflect the views of UKTN.