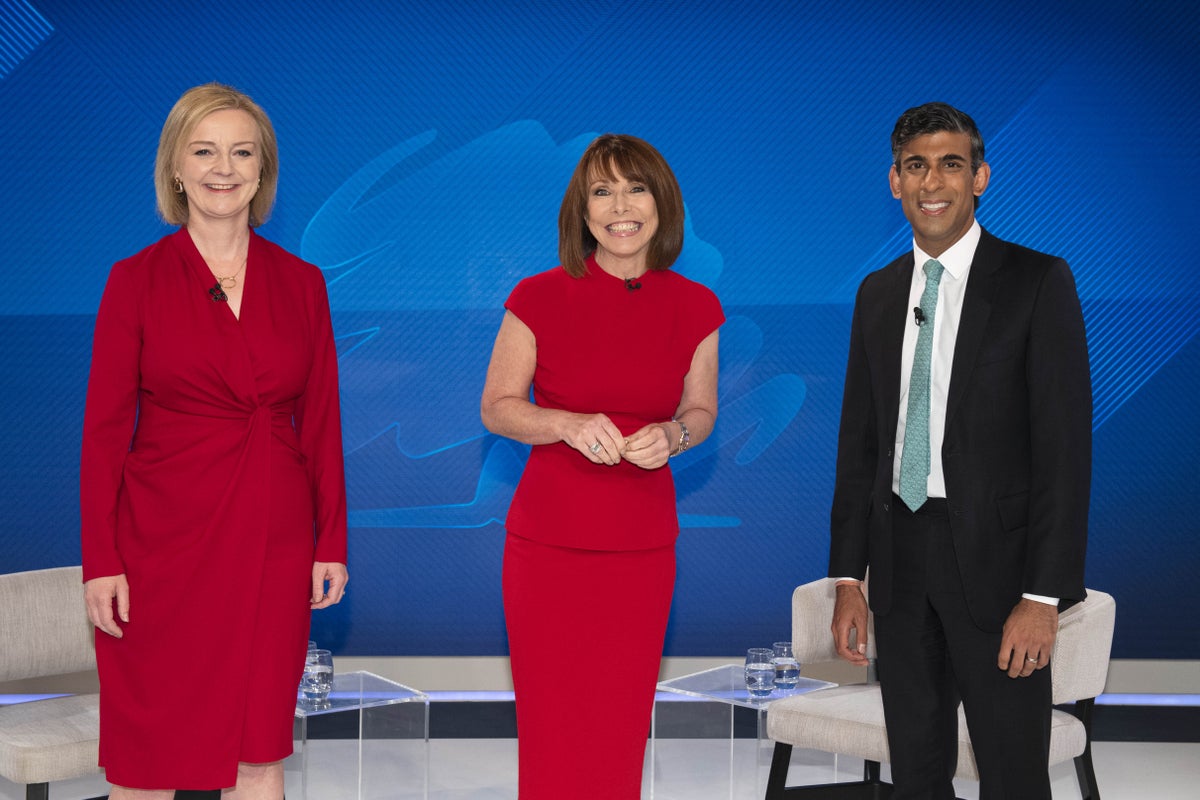 iz Truss has maintained that a recession is “not inevitable”, despite the Bank of England predicting Britain will plunge into a deep downturn lasting more than a year.

During a televised debate for Conservative Party members on Sky News, Ms Truss said her plan of quick tax cuts was needed.

Allies of Rishi Sunak, her rival in the race to become the next prime minister, have argued that Ms Truss’ “dangerous” approach would risk further fueling inflation.

The Bank of England forecast on Thursday that the economy will plunge into its longest recession since the 2008 financial crisis and that inflation will peak at more than 13 percent this year.

Interest rates were also raised to the highest level in nearly three decades, from 1.25% to 1.75%, driving up the cost of mortgage payments.

Under questioning, Ms Truss said: “What the Bank of England has said today is of course extremely worrying, but it is not inevitable.

“We can change the outcome and we can make it more likely that the economy will grow.”

She added: “Now is the time to be brave because if we don’t act now, we’re going to face very, very difficult times.”

Ms Truss stressed that “trying to balance the books prematurely is actually counterproductive”.

She said: “It is important in the long term to ensure that the private sector grows faster than the public sector and that we can generate the revenues for our economy and also be able to pay for our public services.”

See also  Salman Khurshid says he is taking part in protests to save his leader; BJP says the true nature of the turmoil is being exposed - Political News , UK Time News

The Foreign Secretary declined to answer questions about whether she would strip Boris Johnson of the Conservative Party whip if she became Prime Minister in the event that he misled parliament.

“I’m not prejudiced about that, but by the way I am very clear that he has not misled Parliament,” she said.

Rishi Sunak insisted he would not withdraw from the competition, despite polls suggesting Ms Truss has a commanding lead.

He said Liz Truss’ plans would exacerbate the dire economic situation and warned of “millions of misery” by “throwing oil on the fire”.

The former chancellor told the Sky News debate: “We in the Conservative party need to get real and fast because the lights on the economy are flashing red and the main cause is inflation.

He said he had a plan to grow the economy, but it “starts with not making the situation worse.”

While polls show Ms Truss is the clear frontrunner in the race, Mr Sunak found some solace in getting the support of a majority of the public during the Sky News debate.