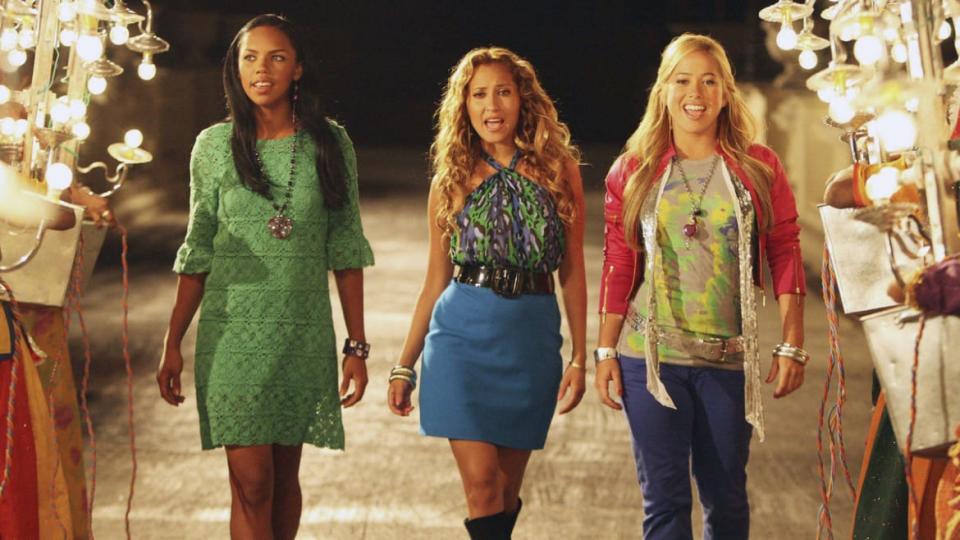 “Untouchable.” “Grammy-worthy.” “Ahead of their time.”

These are just some of the ways Twitter and TikTok have described The Cheetah Girls the past weeks. The platforms are suddenly saturated with clips from the beloved Disney Channel movies, as fans are determined to once again give the titular group their flowers, 20 years after their debut.

The Cheetah Girls film trilogy has a great legacy, with the first film of the franchise reportedly reaching 84 million worldwide viewers and then propelling the eponymous girl group to global fame. Released in 2003, it was also Disney Channel’s first musical feature film, paving the way for the success of movies like High School Musical, Camprockand Teen Beach movie.

But unlike the more commercially successful franchises that followed, The Cheetah Girls has gained an online following that continues to invest in the group’s music – analyzes suggest the group still attracts more than half a million Spotify listeners a day, despite breaking up in 2008.

The group’s continued resurgence extends beyond music. The fandom focuses on visual aesthetics, performance pedigree, and establishing “icon” status – all of which the group has excelled. Fans on social media are doing everything from putting together perfectly coordinated replica looks inspired by the group, recreating it Which iconic”Stutscene in Barcelona. Memorable lines from the franchise have been reused as reaction photos and videos on Twitter. (I imagine there’s nothing more devastating than someone turning you down with Galleria’s iconic line, “Let’s bounce, girls.”)

Why has The Cheetah Girls had a decades-long grip on social media and a generation of Disney Channel-loving kids? Hold on to your hats, folks. I know talking about race is scary, but we’re going to do it anyway.

An almost universal experience among non-white girls who grew up in predominantly white regions is being “Taylor.” No, not Swift—McKessie. When “playing” High school musical on the playground, we were always assigned the role of Taylor McKessie, even when we desperately wanted to be Sharpay Evans. Why? Our brown skin of course. How dare we ask to play someone else?!

This was always a bit confusing to me because I knew I was South Asian, while Taylor was African American. It wasn’t until I got older that I realized that for some people we were just ‘the other’.

But when us girls would pretend to be The Cheetah Girls, I was suddenly presented with choices. I looked like most of the characters so I could be whoever I wanted. I was Galleria and my heart beat to lyrics like “my knight in shining armor is me.” I was Dorinda, dancing like no one was watching. I was Aqua, roaming the playground pretending to be in quaint Barcelona. I was finally seen.

The Cheetah Girls series, based on the books by Deborah Gregory, follows the journey of four New York teens who dream of becoming a superstar. The cast for the Disney Channel adaptation was led by Raven Symoné, who had recently established herself as the first Disney-it-girl by playing her namesake in That’s so Raven, the first program on the channel with more than 65 episodes. Its massive viewership allowed it to air 100 episodes in four seasons and spawned the first Disney Channel spin-off with Cory in the house. Symoné co-starred with 3LW members Adrienne Bailon and Kiely Williams, as well as Sabrina Bryan, real name Reba Sabrina Hinojosa.

Before The Cheetah Girls, there were no live-action Disney Channel productions aimed solely at children of color. By the late 1990s, the broadcaster had just about mastered the formula for a successful original series: an all-American family with white picket fences, focusing on the trials and tribulations of a teenager as they navigate those awkward adolescent years. Shows like Even Stevens and Lizzie McGuire were hits, prefiguring a golden era of original series that would dominate youth culture.

Children of color usually played minor roles in this formula, often relegated to supporting roles. The channel’s film schedule was similar. Disney Channel did have some ethnic minorities as main characters, though generally in those productions that revolved entirely around issues of racial discrimination and white tolerance. Movies like The color of friendshipthe story of an unlikely friendship between a black American and a white South African during apartheid, were praised for the “real world” lessons they taught their younger audiences.

With few exceptions like the recently rebooted fan-loved cartoon The proud familythe overarching message was clear: If the Disney Channel “does” racial diversity, it would teach its viewers—primarily the whites—a lesson.

Enter The Cheetah Girls, a film about the unbreakable bond between four black and brown teenagers as they rise to superstardom. It went against the established formula in every way and yet, 20 years later, it remains one of the channel’s greatest successes.

The cast’s ethnic makeup has been a talking point since its original premiere, sometimes as a point of mockery. A 2003 review reduced the film to a “culturally diverse morality lesson disguised as a musical fantasy”. This story followed the group up to the final installment of the franchise; a New York Times journalist described the premiere of The Cheetah Girls 3: One World like “less fun [a] typical Hollywood cast party than some sort of United Nations session.”

Today, however, the diversity of The Cheetah Girls is a big part of the group’s popular appeal and longevity. The ensemble’s energetic performance was a novelty at the time that helped fill a large gap in children’s entertainment. It was a much-overdue inclusion of black and brown girls in cinema as complex characters, liberated from the cruel lens of racial analysis for the amusement of white audiences.

It’s important to note that the ability to stand the test of time doesn’t just stem from the fact that the group was racially diverse. It relies more on each member’s differences being present and celebrated, not without defining the characters themselves.

This nuance is perhaps best expressed in Chanel’s (Bailon) portrayal in the second film. Chanel’s Spanish heritage was a marked departure from the norm, both in her medium brown complexion and in her ability to switch between Spanish and English with ease. She acted as a translator for the others as they navigated Barcelona, ​​correcting Aqua’s incorrect pronunciation of Sagrada Familia (sorry, Sagrrrrrrrada Familia – roll those ‘Rs, folks).

Chanel was just Spanish and she never shied away from this fact. Her identity was never exaggerated for comedic effect, and it presented no inherent obstacle for her to overcome. This was an uncomplicated, yet telling image, teaching a generation of young girls to normalize their differences as well. This was a universe where girls from minority ethnic backgrounds could thrive without question.

It is this tasteful form of inclusion that has made the group a safe place for marginalized children, and it is this sense of security that allows the franchise to thrive. For colored women, The Cheetah Girls are one of the few sources of true, pure nostalgia.

That may be the main reason why the group could experience a social media takeover in 2023. Contemporary entertainment and pop culture is defined by nostalgia. This isn’t limited to those watered-down reboots of your favorite childhood shows; it also manifests itself as the resurgence of Y2K fashion and the re-emergence of late 1990s R&B into the mainstream. It is a longing for the younger version of ourselves and the rediscovery of those first suspicions of our identity.

When images of teens of color are scarce on screen, women of color have no one to directly identify with. In an era where nostalgic entertainment reigns supreme, we’re groping in the dark.

And with this in mind, the recent explosion of The Cheetah Girls social media content makes so much sense. We’ve taken comfort in what was one of the few children’s franchises of the early 2000s to present a nuanced and accurate depiction of black and brown girlhood. The group and its actors personified a sense of uninterrupted, unabashed joy for those girls who could not find themselves anywhere else on the screen, and they still inspire a sense of pride in their loyal fans.

It is this unparalleled sense of inclusion within the group that makes the franchise so valuable. Symone, Bailon, Williams and Bryan showed a generation of girls the values ​​of self-love, self-reliance and self-confidence. We will always be grateful for that The Cheetah Girls– and sing their hits.

Read more at The Daily Beast.

Get the Daily Beast’s biggest scoops and scandals straight to your inbox. Sign up now.

‘Shrinking’ star Jason Segel never thought mental illness was stigmatized: ‘I’ve asked for help so many times in my life’