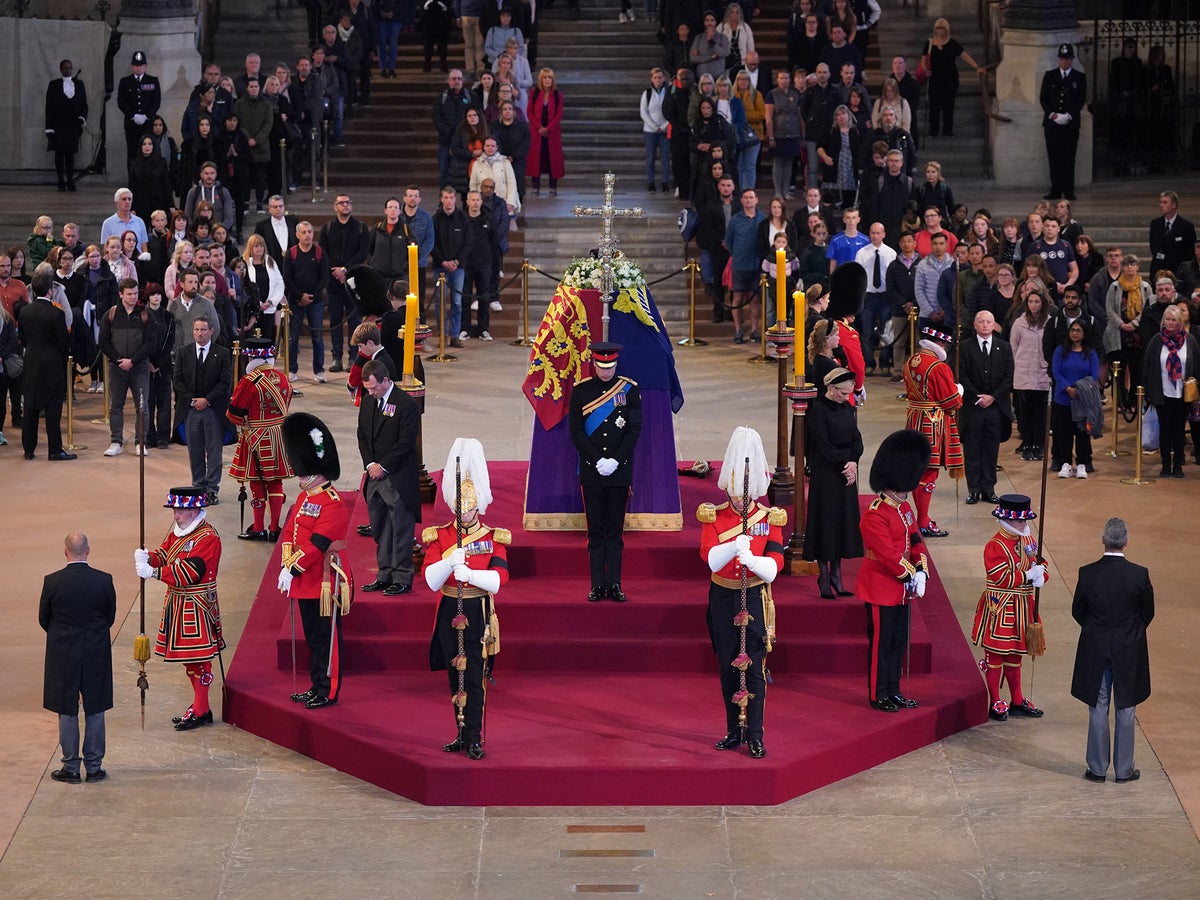 Mourners hoping to see the Queen lying in state only have one more day to do it.

Overnight queues to Westminster Hall continued into Sunday morning but the clock is ticking.

Public access to the hall is due to end at 6.30am on Monday so the Queen’s coffin can be moved to Wesminster Abbey for her funeral.

With waits upwards of 15 hours, that doesn’t leave much time for people to join the queue if they’re not in it already.

See also  The Death of Queen Elizabeth II: A Minute by Minute Guide to Her State Funeral

For those who did reach Westminster on Saturday evening, they may have witnessed Prince Harry and Prince William led a silent vigil held by the Queen’s grandchildren.

The Prince of Wales led his brother the Duke of Sussex, as well as his cousins Zara Tindall and Peter Philips, Princesses Beatrice and Eugenie and Lady Louise Windsor and Viscount Severn.

It is the first time grandchildren have taken part in the ceremony, following the Vigil of the Princes led by King Charles on Friday.

Earlier in the afternoon, the King and the Prince of Wales made a surprise visit to greet mourners in the queue for the Queen’s lying in state to thank them for their support.

A Chinese factory south of Shanghai was flooded with orders for thousands of British flags, minutes after Queen Elizabeth II died on 8 September.

Orders started pouring in at Shaoxing Chuangdong Tour Articles Co within just one hour of her death, forcing more than 100 employees of the company to set aside their work and begin a 14-hour shift to make the flags.

At least 500,000 British-themed flags were made in the first week, according to general manager Fan Aiping.

“The customer came to our factory directly to grab the products,” Ms Fan said. “Many of the flags weren’t even packaged. They were put in a box and shipped away.”

Hundreds of kilos of food have been confiscated from the people waiting in the queue to see the Queen lying in state.

Mourners are not allowed to take food or drinks inside the Palace of Westminster and such items are being confiscated.

Charity The Felix Project has received hundreds of kilos of food, mostly snacks like crisps, chocolate and biscuits, and is also accepting unwanted blankets.

People are arriving with plenty of food considering the long wait time to pay their respects. The food is taken away at Victoria Tower Gardens before their entry to the Parliamentary estate.

The Felix Project will distribute the items to the thousands of community groups it works with across the capital.

Charity chief executive Charlotte Hill said: “We are honoured to be here to play a small part in this hugely poignant event and to know that an extra layer of good is being done here.

“This food is a hugely unique donation and will help hundreds of people who are struggling to afford to eat. We support thousands of organisations helping a huge range of people and every day more are getting in contact asking us to give them food.

“We need more food, so opportunities like this are truly wonderful.”

Princess Elizabeth was 21 when, on Thursday November 20 1947, she married her prince in the surrounds of the central London church.

It was a morale booster in tough post-war years and millions of people listened on the radio.

Just five years after she married, the princess became Queen Elizabeth II on the death of her father, George VI.

During the service, the Queen took the oath and was anointed, with the St Edward’s Crown placed on her head.

An estimated 27 million people in Britain watched the ceremony on TV after the Queen agreed it could be televised.

The Abbey was also the site of romantic royal celebrations for the Queen.

Her daughter, Princess Anne married Captain Mark Phillips in the church in 1973, while her second son, the Duke of York, wed Sarah Ferguson in 1986.

In 2011, her grandson, the Duke of Cambridge – now the Prince of Wales, exchanged vows with Kate Middleton as millions watched across the globe.

The Queen has also attended thanksgivings or commemorative events such as a service to mark the 60th anniversary of the Duke of Edinburgh’s Award scheme in 2016 at the Abbey.

The church was also a reminder of the loss of her mother, Queen Elizabeth the Queen Mother, and former daughter-in-law, Diana, Princess of Wales.

The Queen Mother’s funeral was held at the Abbey in 2002, five years after Diana’s.

Transport for London (TfL) is preparing for one of the biggest transport operations in the country’s history on Monday as more than one million people are expected to descend on London for the Queen’s funeral.

The demand is expected to “reach the climax” and mourners are urged to delay their return journeys and check for updates, TfL’s boss said.

There are fears the transport network will be overwhelmed on Monday afternoon if too many people visiting the capital travel home immediately after the funeral procession leaves Westminster shortly after noon.

Tomorrow, around 250 extra rail services will run – including some overnight trains – and National Highways has suspended planned motorway closures across England.

Andy Byford of TfL said the capital is continuing to see “huge numbers of additional passengers” since the Queen died and Monday will be the busiest day.

He told the PA news agency: “We’re ready for probably one of the busiest days Transport for London has ever faced.

“It’s hard to say exactly how many additional people (will travel), but we’re preparing for potentially a million people just within the footprint of the royal palaces and Hyde Park.”

Mr Byford said TfL is “leaving nothing to chance”, with non-essential meetings postponed and people from across the organisation working to ensure visitors can “get around the city”.

The Queen’s history with Westminster Abbey

The Queen’s funeral is to take place at Westminster Abbey – the site where she was both married and crowned.

It will be the first time in more than 260 years that a sovereign’s funeral has taken place in the Abbey, the last being George II’s in 1760.

The coffin will be taken in a grand military procession from the Palace of Westminster to the Abbey for the service at 11am on Monday.

Two thousand guests are expected to attend the funeral, which will be conducted by the Dean of Westminster, with the sermon given by the Archbishop of Canterbury.

Lessons will be read by the Prime Minister and the Secretary General of the Commonwealth, while the Archbishop of York, the Cardinal Archbishop of Westminster, the Moderator of the General Assembly of the Church of Scotland and the Free Churches Moderator will say prayers.

The Last Post will sound at the end of the service, followed by two minutes of silence.

The late Queen’s most defining milestones took place at the Abbey, both in terms of her personal happiness and her public duty.

Further meetings for the King on Sunday

King Charles, alongside the Queen Consort, will host heads of state and official overseas guests at the palace, in what the King’s spokesman described as an “official state event”.

Later, a service of reflection for the Queen at the Kelpies sculptures near Falkirk, Scotland.

Some 96 lanterns, one for each year of Her Majesty’s life, will be lowered into the pool of reflection at the foot of the Queen Elizabeth II Canal, before wreaths are placed into the water.

Rain is unlikely to fall during the Queen’s funeral with large crowds set to gather in London and Windsor.

The late monarch’s coffin will remain in Westminster Hall for the public to view until 6.30am on Monday, ahead of the service at Westminster Abbey.

Forecasters say temperatures will drop as low as 10C overnight into Sunday, as mourners continue queuing for the lying in state, before a warm and sunny day.

Temperatures had dropped as low as 4C for those waiting in line overnight on Friday and early on Saturday morning.

Rachel Ayers, of the Met Office, said: “Sunday is a cloudier picture across the UK than Saturday, though southern areas will see some bright or sunny spells to start.

“Scattered showers will affect the Midlands northwards at times throughout the day, particularly across northern Scotland and Norfolk where showers are feeding in from the North Sea.

“Staying cool in the east but temperatures near average elsewhere and locally feeling warm in any sunny spells in the far south.

“Top temperatures will be around 19C.”

The chief executive of Chest Heart and Stroke Scotland has said she is “hugely honoured and privileged” to be attending the Queen’s state funeral.

Jane-Claire Judson will be part of the 2,000-strong congregation at Westminster Abbey on Monday.

The Queen was patron of Chest Heart and Stroke Scotland for 70 years and had “a long association with the organisation” and the work it carries out.

Ms Judson said: “I think the feeling is one of being hugely honoured and privileged to be able to take part in something that is very sombre, but is also very important to such a large number of people.

“And I do feel very privileged that I am able to do that on behalf of Chest Heart and Stroke Scotland and all of our staff and volunteers.

“The Queen was our patron, so for us it’s extremely special and important to pay our respects.

“So from that perspective, it’s both sad but also an opportunity to celebrate her life and all the support that she gave to the charity.”

Ms Judson said the Queen’s “consistent support” was something that has been valued by the organisation.

“The Queen herself was hugely passionate and committed around public service and volunteering,” she said.

“We’re one of Scotland’s largest volunteering charities, so it meant a lot to our volunteers to have that recognition, that support.”

Chinese representatives will be able to attend the Queen’s lying in state along with the rest of the dignitaries invited to her funeral, the UK Parliament has suggested.

But it is understood the country’s ambassador to the UK is still not welcome on the estate.

It was expected the Chinese official delegation would be barred by Commons Speaker Sir Lindsay Hoyle from entering Westminster Hall to view the late monarch’s coffin.

But asked if it had been banned, a Parliament spokesperson said heads of state – or their representatives – who are invited to the funeral are also welcome at the lying in state that precedes it.

According to Erskine May – known as the “bible” of parliamentary procedure – Westminster Hall is under the joint control of the Lord Great Chamberlain and the Speakers of both the Commons and the Lords.

Chinese President Xi Jinping is not scheduled to attend the Westminster Abbey service on Monday, instead sending his deputy, Wang Qishan.

Two sanctioned Tory MPs, Sir Iain Duncan Smith and Tim Loughton, had been raising concerns about the delegation’s possible attendance, arguing it was “extraordinary” it had received an invitation.

A man who was arrested on Friday at the ancient hall where Queen Elizabeth II is lying in state has been charged with a public order offence.

Muhammad Khan, 28, of Barleycorn Way, Tower Hamlets was charged on Saturday with an offence under Section 4A of the Public Order Act for behaviour indenting to cause alarm, harassment or distress in Westminster Hall, the Metropolitan Police added.

The force said in a statement that Khan will appear in custody at Westminster Magistrates’ Court on Monday 19 September.

What is the GMX token and why is it rising today?