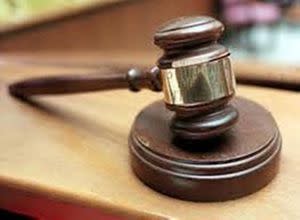 A man has been sentenced to several years in federal prison after an incident in 2019.

Austin Martin, 23, was sentenced to 10 years in federal prison for possession of a firearm, according to Joseph C. Murphy Jr., United States Attorney.

He was sentenced on Tuesday.

On May 4, 2019, a Memphis police officer saw a car doing donuts at the intersection of Knight Arnold and South Mendenhall, court records show.

The driver then drove towards the policeman’s car and hit a fire hydrant.

According to a statement, five men jumped out of the car. Then Martin came out of the driver’s door wearing a bright yellow vest and pointed a handgun at the uniformed Memphis police officer.

The officer drew his gun but did not fire as there was a passerby in the background.

Martin fled and was arrested minutes later with the gun still in his pocket, according to court records.

On May 2, 2019, Martin robbed and shot two men in Midtown, then on the same day, Memphis police investigators then matched Martin’s gun to those two shootings.

Download the FOX13 Memphis app to receive alerts on breaking news in your neighborhood.

According to reports, both victims survived and identified Martin as the shooter.

Due to his prior convictions, federal law prohibits Martin from owning firearms and ammunition.