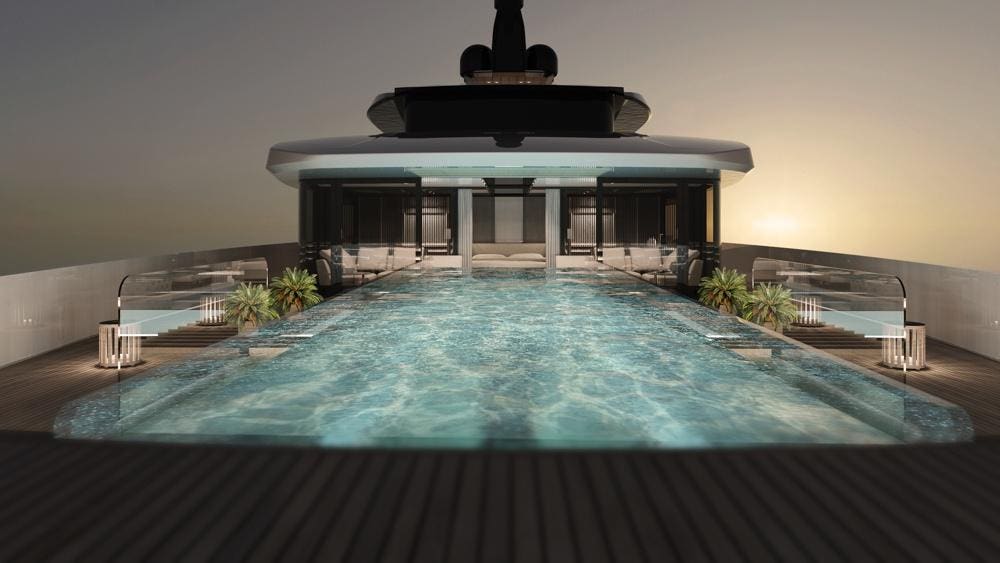 At 42, Alberto Mancini is one of the youngest yacht designers of his caliber in the world. Founder of AM Yacht Design in Monaco, the Italian has already worked with major manufacturers such as Riva, Fairline and Azimut, as well as Officina Italiana Design, Nuvolari Lenard and Ken Freivokh. One of the designer’s most iconic works to date is Fairline’s elegant Squadron 50 yacht. Mancini’s latest project, a wellness-inspired 76m superyacht concept for Italian shipyard Tankoa Yachts, takes the designer into the big league of yachts over 70m for the first time.

“This is an evolution of existing projects towards something innovative and more contemporary with the collaboration of a great designer,” says Vincenzo Poerio, CEO of Tankoa. “Despite his young age, I consider him one of the greatest yacht designers in the world. I think the suspended swimming pool at the front between the upper deck and the main deck is a visionary idea from Alberto, who once again surprises with innovative solutions ”, adds Giuseppe Mazza, Sales and Marketing Director of Tankoa .

UKTN talks with Mancini about his journey to the world of yachting and how he approached the innovative design of the superyacht Apache, unveiled at the Monaco Yacht Show 2021.

How did you get into the design of yachts?

Since my childhood I was fascinated by cars, but I grew up in the port of Trieste and therefore spent my whole childhood sailing with my father on my family’s sailboat. In the end, my passion for the automobile met the culture of the sea. When I was 18, I moved to Turin to study transport design, but after the first year of the course, I decided to get into the yachting business. Instead of designing a car for my final project, I designed a sports yacht.

Then in a very naive way I picked up the phone and called the Riva Shipyard and said “I’m a young designer, could I join you?” At first they were shocked, but the guys on the phone said, “If you don’t try how can you start your career? So, with a little good timing and luck, I got my first job at Riva. It was a great start to learning more about beauty and propulsion.

I then wanted to live abroad so I spent a few years with Ken Freivokh’s design team in the south of England where I was involved with the Maltese Falcon. Finally, I returned to Italy and created my own design studio in 2010, first with a partner, then alone.

Why did AM Yacht Design move to Monaco in 2018?

My dream was to move to Monaco. I have always been drawn to the superyacht capital and when I got here I felt a fire in me. So I said to my design team, “I’m moving. If you want, join me. Some of them are still with me now. Since arriving in Monaco, I have changed my way of approaching design and clients. It opened my mind. I never for a moment thought of going back to Italy.

Why this collaboration with Tankoa so important to you?

I worked for several years for yards like Azimut but when Tankoa offered to draw lines for a few big yachts, it was something new. It was the first time that I was able to express myself on a large yacht. I had a lot of ideas in my head but eventually I could put them down on paper and show them to a shipyard.

What was your process behind the design of the Apache concept superyacht?

First of all, I sketched the broad outlines. I decided to opt for horizontal and vertical lines so that the architecture was very modern, sophisticated and sculpted. It was like taking a block of marble and starting to carve. The result is a great work of art because every deck is connected. But it’s more than art – it must have a function. The stacked decks had to provide multiple areas for relaxation and social activities, but the balance between indoor and outdoor spaces had to be instinctive, bright and happy.

The flying pool with this double-deck wellness spa idea. It is something very unique. On the bow, I installed a flying pool that looks like a jewel in the bow, dividing the two decks. The pool is 9.5m long and cascades down a water walkway in the owner’s suite. When you swim it feels like you are flying through the yacht and then walking on the gangway to the cabin.

The beach club with its folding platforms is also unique. I wanted to avoid the typical dark cave effect that we see in many beach clubs today. The design of the Apache Beach Club is not just an area of ​​access to the sea to be enjoyed only when anchored during the day; it is fully integrated into the main deck saloon and can therefore be used day and night as an extension of the outdoor living space.

Reliance Industries gains more than 1% ahead of second quarter results