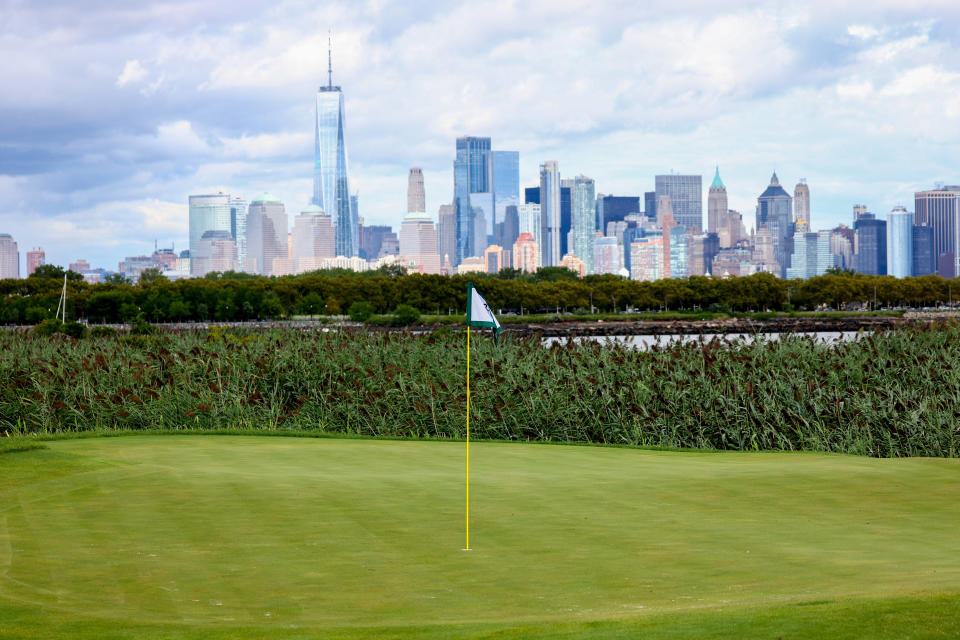 There has never been an LPGA event like this. With an AJGA Invitational being held simultaneously at Liberty National, 24 of the best junior girls in the country will compete against the best pros in the world with the gleaming New York City skyline in the background.

Taking place June 1-4 in Jersey City, New Jersey, the new Mizuho Americas Open features 120 players competing for a $2.75 million purse, one of the largest of the non-major events. Michelle Wie West, a Mizuho ambassador, will host the tournament.

“I’m super excited about the junior component,” said Wie West. “It’s all I wanted to do.”

A view of the gallery around the 13th green can be seen during the final round of The Barclays on August 30, 2009 at Liberty National in Jersey City, New Jersey. (Photo by Kevin C. Cox/Getty Images)

Mizuho Americas, headquartered in New York City, is the fastest growing region within Mizuho Financial Group, with 55,000 employees and $2 trillion in assets.

“They are among the top 15 banks in the world,” said LPGA Commissioner Mollie Marcoux Samaan, “and we are excited to be their first entry into the sports marketing space.”

Jerry Rizzieri, president and CEO of Mizuho Americas, said: Golf week that while they looked at several PGA Tour options, which would have been more beneficial in terms of viewership, that wasn’t the reason for the mission. Mizuho sees this as a targeted sponsorship.

“I think our organization has done a good job of creating opportunities for women,” said Rizzieri. “Two of our three largest divisions are actually led by women. In general, I feel that women are very underrepresented, especially in our industry, and certainly at the highest level. But I also believe that the athletes themselves, be it the WNBA or the LPGA, are very much undervalued. Not only because of their craftsmanship, but also because of their dedication.

“When I think about the progress that has been made over the years, it’s certainly commendable, but there’s still a long way to go.”

While purses for major championships have risen significantly in recent years, week-to-week purses on the LPGA are still lagging. Marcoux Samaan said that in the future, new tournaments will start on the schedule with a purse of at least $2 million. Though Mizuho pushed that higher in hopes of making an impact and creating a premiere, destination event.

This is the first time the LPGA is coming to Liberty National, hosting the 2017 Presidents Cup and several PGA Tour events. Marcoux Samaan said the event, owned and operated by Excel Sports Management, ticks all the boxes the tour looks for in a new partner.

The unique element of connecting past and present, with future LPGA stars playing alongside current ones, aligns with Wie West’s mission. She is excited to hear the support of her peers, who are looking forward to paying it off within the ropes.

For some junior players, this can be a life-changing event, confirming a dream of competing at the highest level.

“I hope many friendships are made and many mentorships are formed,” said Wie West, who stepped out of the competition earlier this year. The 32-year-old mom will participate in junior clinics at Liberty National and spend time in the broadcast booth.

In 2023, Wie West will be joined by Annika Sorenstam to host the LPGA tournament as The ANNIKA powered by Gainbridge at Pelican takes place in Belleair, Florida, in November.

The first tournament that Wie West won on the LPGA was the 2009 Lorena Ochoa Invitational in Guadalajara, Mexico. Winning Ochoa’s event was extra special, Wie West said, not only because she sought out the LPGA and World Golf Hall of Famer, but also because she could see the impact Ochoa had in her home country.

“I never thought it would happen so quickly and at Liberty National,” Wie West said of hosting an LPGA event. “It has been the greatest honor.”