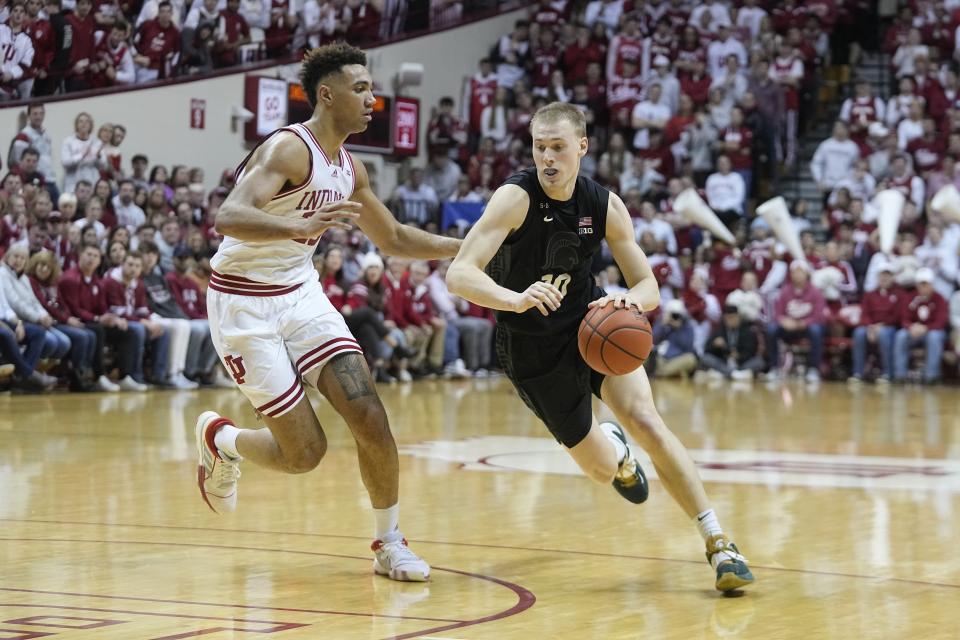 BLOOMINGTON, Ind. – It wasn’t the start or the finish. This time, the middle section of Michigan State basketball proved the Spartans’ downfall. And maybe a little fatigue too.

In a run-packed game, Indiana got the biggest and most current — an 18-4 burst midway through the second half — to pull away from MSU to a chippy 82-69 victory on Sunday at Assembly Hall.

It was the sixth game in 16 days for the Spartans (13-7, 5-4 Big Ten), a game every third day since a home win over Michigan on January 7. MSU will get an extra day off before hosting Iowa on Thursday at Breslin Center in East Lansing (7 p.m./FS1).

The first half had some drama and a lot of back and forth basketball.

After back-to-back lethargic starts, the Spartans came out strong, with Hauser attacking early with a 3-pointer and a driving layup.

Mady Sissoko, who also scored in the first two minutes, ran into trouble near midcourt when Miller Kopp knocked him down. Kopp got a flagrant foul that muffled the crowd buzz that arose when Trey Galloway hit two three-pointers to briefly put the Hoosiers ahead seconds earlier. Sissoko made both free throws, then Hauser hit a floater for four-point possession. Another driving Hauser layup forced IU coach Mike Woodson to burn a timeout to stop the Spartans’ 10–0 run.

MSU went up 21-14 on a Hoggard free throw, but he got his second foul less than a minute later and sat the final 8:17 of the half. A pair of Walker buckets extended the Spartans’ lead to nine, then it was the turn of the Hoosiers for a run.

Izzo called timeout on a Jackson-Davis layup. Then, after a Hauser miss, the Indiana star beat Hauser in transition, took a pass over the top, threw down a dunk and stared forward into the MSU. It ended up being a 10-0 Hoosiers run. To give them back a one-point lead, and they further extended it with an 11–0 run before the Spartans cut it back to a 37–32 halftime deficit in the final minute.

Hauser had 14 points at the break, made 5 of 9 shots, and grabbed four rebounds in his 17 minutes.

MSU came out of halftime, gave up a pair of free throws to fall behind by seven, then went on for another blistering run with some more jaws and a double technical foul for Hauser and IU’s Jordan Geronimo. Akins hit a 3-pointer, ended a 3-on-2 break with a layup, then got a steal and raced to a dunk as part of a 12-3 comeback to regain a two-point lead, 44-42, with 15 :52 to play.

Both teams traded buckets for the next 2 1/2 minutes, with Akins’ 3-pointer from a Hauser pump fake and pass giving the Spartans their final advantage at 51-49 with 13:32 left. Everything is sent sour from there.

MSU went into an offensive funk, missing six consecutive shots and going scoreless for 7 1/2 minutes, as Bates bombed away from the outside. He started and ended Indiana’s knockout run with three-pointers, his third in that stretch from well behind the arch in Walker’s face.

Jackson-Davis then went to work and exhausted MSU. He had 18 points and nine boards after the break, while Galloway scored 11.

This article originally appeared on Detroit Free Press: Michigan State basketball out of game in second half at Indiana, 82-69