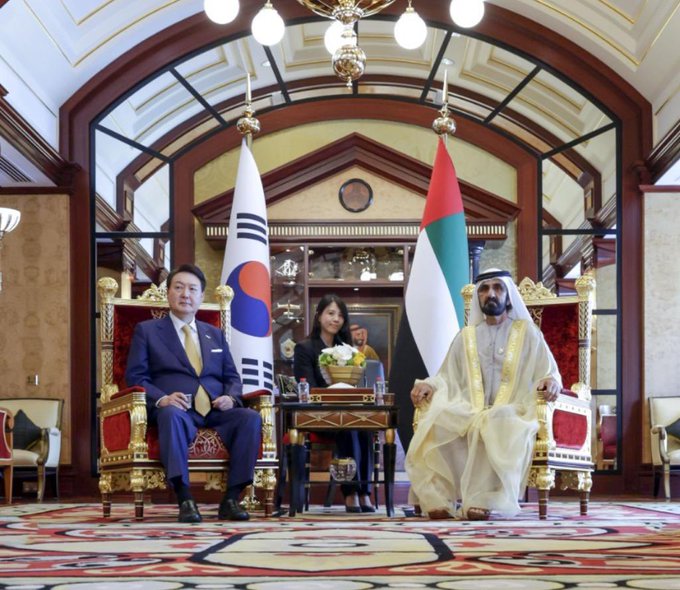 His Highness Sheikh Mohammed bin Rashid Al Maktoum, Vice President and Prime Minister of the UAE and Ruler of Dubai, received today the President of the friendly Republic of Korea, Yoon Seok Yul, on his first state visit since assuming his presidential duties.

His Highness welcomed the Korean President and the accompanying delegation, during the meeting, which took place at His Highness’s palace in Zabeel, during which they reviewed the strategic relations that bring together the two friendly countries and peoples and their continuous development over the past decades, and ways to enhance cooperation opportunities and develop it to broader horizons, in addition to reviewing the most important developments and regional issues. and international interests.

During the meeting, the agreement was confirmed on the need to continue joint work to push the UAE-Korea relations to higher levels in various fields, including investment, trade, economic, scientific, cultural and advanced technology sectors, in addition to renewable energy, space exploration and other vital fields.

His Highness Sheikh Mohammed bin Rashid Al Maktoum expressed his aspiration that the visit of the Korean President to the UAE constitute a starting point for advancing the strategic partnership within the paths of joint action, in a manner that would rise to the level of strong relations between the two friendly countries.

For his part, the President of the Republic of Korea, Yoon Seok-yul, expressed his happiness at visiting the United Arab Emirates, and the deep-rooted and decades-old relations that have brought the two countries together, which have grown and developed within a framework of mutual understanding and respect, and the convergence of visions on most regional and international issues of common concern.

The President of the Republic of Korea, Yoon Seok-yol, also expressed his aspiration that the strategic relations between the Republic of Korea and the UAE will witness further progress and prosperity during the next stage, and the keenness of the two countries to develop ways of cooperation to the highest levels to include various strategic fields, in light of the capabilities and experiences that the two countries possess. And capabilities that enable them to achieve the aspirations of the two friendly peoples towards the future.