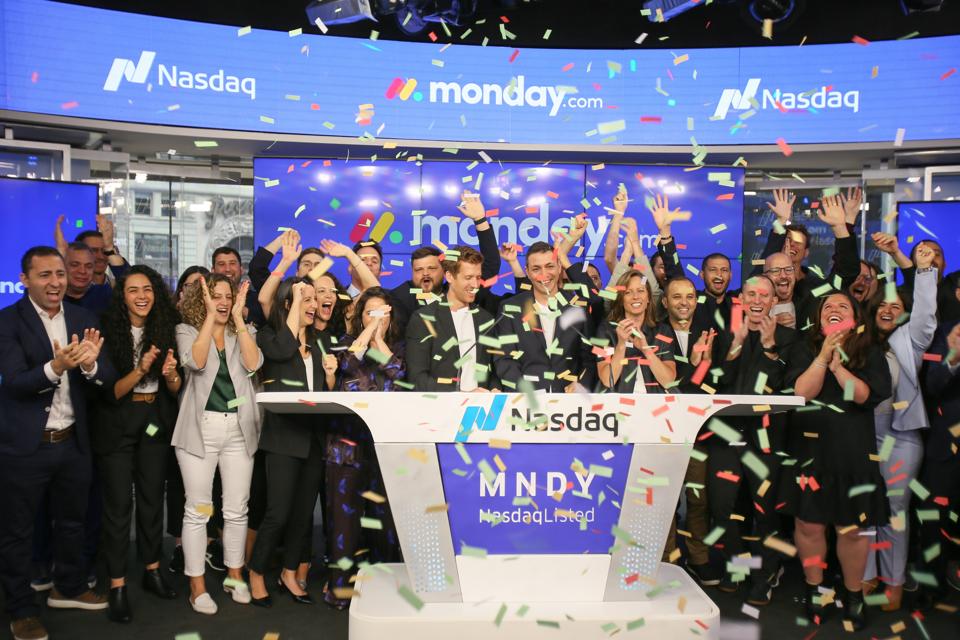 Cloud companies that have recently faced turmoil in the public market can welcome the strong debut of a new market entrant, Monday.com.

Shares of the Israel-based software company were priced at $ 155 and trading at around $ 174 as of noon Thursday, giving monday.com a market cap of around $ 7.6 billion and co- CEO Roy Mann a billionaire.

“We really wanted to build a great, long-term business, and an IPO is a big step along the way,” said Mann, who co-founded the company with Eran Zinman, now co-CEO of monday.com, said in 2012. “It was a time when the company was mature and the market seemed to be in a great position, so it was the perfect timing.”

Originally called dapulse, monday.com (the company stylizes it minus the capitalization) was launched in Tel Aviv, where Mann was an executive at Wix looking for a better way to manage his team through software. He brought in Zinman, who was then leading research and development at mobile phone company Conduit Mobile, and the two launched a product in early 2014 that offered task management boards and task updates. teams. In 2017, dapulse was rebranded as monday.com, a nod to its international audience (work weeks start on Sundays in Israel). The following year, the company reached a valuation of $ 550 million as part of its expansion into the United States (it now has offices in New York, as well as in London and Sydney).

As monday.com tripled its valuation to $ 1.9 billion in 2019, the company was focusing on integrating other business apps into monday.com and charging more for its software as a work platform without code and easily customizable to use for projects away from task management or project tracking. Speaking from the Nasdaq offices, where the company rang the opening bell on Thursday, Mann argued that the company has always viewed itself more as a “working operating system” that simply relied on project management early on to reach customers, who now use the software to manage everything from hotels to manufacturing plants. Clients include Oscar, Universal Music Group and the NHL.

“I think in the long run what will happen in a few years is that we will empower people to control their destiny so that they can build whatever they need to run their business and operations. Mann said. “What will win is the ability to empower people.”

Monday.com closed 2020 with $ 161 million in revenue, up 106% from the previous year. Using its most recent quarter, the company forecasts annualized revenue of $ 236 million for this year, up 85%.

During his action Thursday, co-CEO Mann, 42, is now a billionaire, with his roughly 6 million shares of the company worth just over $ 1 billion. Zinman, 38, moved from CTO to co-CEO in November 2020. He owned around 2.3 million shares of Monday.com when it went public, valuing his stake at around $ 400 million.

A relatively modest 10% to 15% “pop IPO” should not generate enthusiasm among supporters of a direct listing, an alternative to the traditional IPO, in which a company begins to trade a benchmark but does not sell shares at a fixed introductory price. Monday.com didn’t leave a lot of money on the table, even with such a calculation; Speaking just before the stock started trading, Zinman said he and Mann were not worried about the company’s day one trading price. Choosing its investors to be long-term allies, he said, was the company’s priority. “It doesn’t matter what pops up when you’re building a business for a long-term future,” Zinman says.

Money helps too, and Monday raised $ 574 million in the process. Perhaps most important for its long-term trajectory: Some of its new reserves come from Zoom and Salesforce, both of which invested in the company as part of a private placement as part of the IPO. . “For us, it’s a testament that they really believe in our story – and in the action,” Zinman adds.

Although some IPO watchers note that monday.com’s sales and marketing expenses have increased in recent years – the business is not profitable, with losses accelerating to nearly $ 63 million in the past. Q4 2020 – Mann and Zinman point out that the company only spent $ 121 million of the $ 234 million raised as a private company. With 120,000 customers, 70% outside of tech, and recent net retention rates of around 120%, the founders of monday.com rather argue that the market in which it operates is still growing.

“We see a huge opportunity for all businesses in the space,” Mann said. “And we want to be there with a lot of passion to create great products.”

Most Cryptos Won’t Work In The Future, 90% Of NFTs Won’t Be Value In 3-5 Years, Coinbase Co-Founder Warns

Has the Fed’s policy change destroyed the reflation trade?