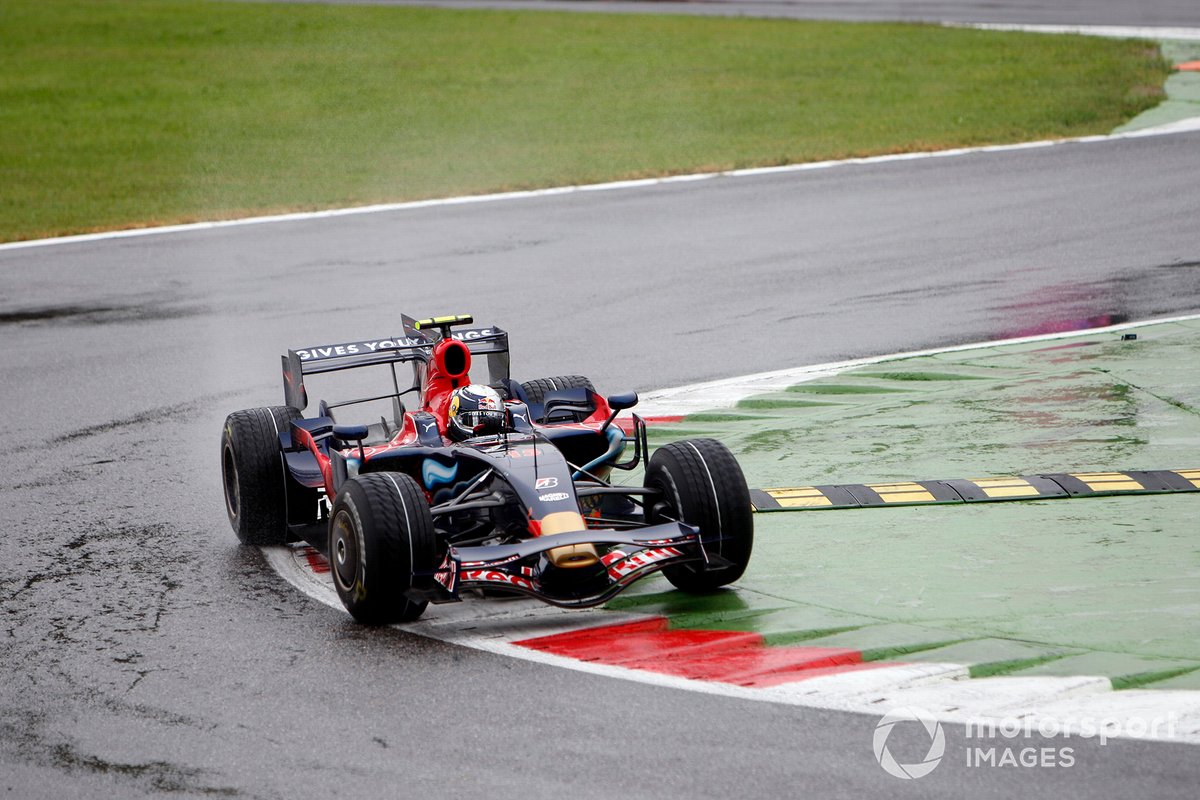 When Sebastian Vettel hangs up his helmet at the end of the year and retires from Formula 1, there will be few circuits more dear to him than Monza.

Vettel’s farewell to the Tifosi, the adoring fans who once announced him as their star and still hold him close to their hearts, was the only highlight of what turned out to be a rather miserable final Italian Grand Prix at the track for the four-time world champion. weekend.

“The fans were great, which was nice, so we’ll take that,” said Vettel, who retired after just 10 laps into the race. “Getting on the track was certainly fun, but the riding was clearly not a highlight.”

But it wasn’t in Ferrari livery where Vettel enjoyed his biggest high at Monza. On this day (September 14) in 2008, he stunned the paddock and staked his claim as a future star by taking his first Grand Prix win for Toro Rosso in heavy rain, which went down in history as one of F1’s great underdog wins. .

The combination of the aero-efficient, low-drag Toro Rosso STR3 and the power of its Ferrari engine meant that Monza would always be a good race for Vettel, who had racked up points regularly since the 2008 chassis was introduced five races into the season. .

But wet qualifying at Monza meant Vettel had a real chance of causing a shock. A change of set-up ahead of final practice gave the 21-year-old the confidence he lacked on Friday, before the changing conditions played into his hands – and against others. Lewis Hamilton’s bet on intermediates caused him to pull out in Q2, meaning he would start 15th just behind Kimi Raikkonen. Felipe Massa could only finish sixth in the sister Ferrari, leaving Hamilton’s team-mate, Heikki Kovalainen, the only driver from a leading team to attempt to beat Vettel. The Finn was eight hundredths of a second short, in part due to a car with more fuel, which pleased Vettel to become F1’s youngest pole sitter.

“I joked with my engineers, we said if it’s wet we should go for pole,” said Vettel. “It’s unbelievable. The conditions were so difficult today, a lot of water. You never knew how much water to expect.

“I never dreamed of being on pole. unbelievable. This is our home Grand Prix. There are two Italian teams. The bigger one is Scuderia Ferrari, but I think people now know the small one: Scuderia Toro Rosso. So it’s unbelievable.”

Vettel had gone back to his roots a few weeks before Monza to hone his wet-weather driving skills, en route to Michael Schumacher’s karting track in Kerpen for the Belgian Grand Prix. He had insisted on riding slicks in wet conditions, despite being told not to. ‘They said, ‘No, you’re crazy!’ and I said: ‘I need some practice when it rains in Spa’,” recalls Vettel. 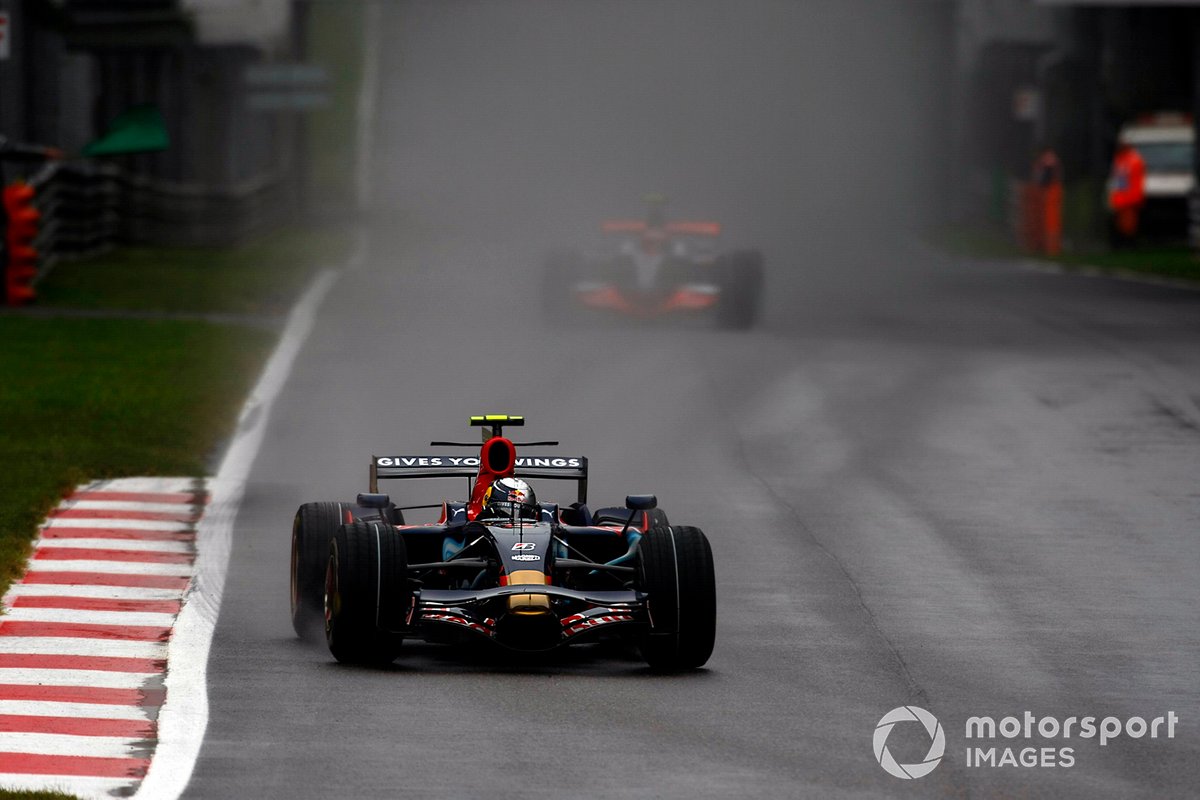 Few thought it would be Monza where the decision really paid off, but it helped Vettel stay calm as he opened a healthy lead over Kovalainen in the early stages. Apart from a brief moment on lap eight, where Vettel snapped a snapshot after taking too much curb in the Roggia chicane, he kept his nerves up front and gradually moved away from Kovalainen. By the time Vettel entered the pits on lap 18, he had 10 seconds free – a buffer large enough to negate the difference in fuel load.

It meant Vettel was cycling back to the front when Kovalainen pitted four laps later, but it was Hamilton’s second McLaren that now became a bigger threat. McLaren had fueled him heavily to try to make up for the qualifying setback, which allowed him to tear Vettel’s lead as he neared the end of his stint. With more heavy rain expected, McLaren brought in Hamilton for another set of full wet roads and fueled him until the end, knowing Vettel had to pit one more time. When the rain came, Hamilton was in the pound’s seat for the win.

But the rain never hit with the intensity that was expected. Vettel was able to keep the gap with Kovalainen at more than 10 seconds, giving him enough buffer to make McLaren blink first when switching to intermediates. For a driver who led a Grand Prix for the first time and the smallest team on the F1 grid, they behaved like seasoned pros.

The unscheduled second stop put Hamilton out of contention for a fight back, meaning Vettel only had to count down the laps, and the enormity of what he was about to achieve gradually kicked in. “At times I thought, ‘There’s still P1 on my board, how can that be?’” he admitted after the race. “I’m fueled to finish, there’s nothing, no pit stops, so just keep it up each other.”

And that’s exactly what Vettel did. With the kind of clinical precision that would make him so hard to beat in his future heyday at Red Bull, he broke the line 12s clear of the pack to take a remarkable first win. At 21 years and 73 days, Sebastian Vettel was the youngest winner in Formula 1 history.

“When I passed the checkered flag I realized I had just won the race, it was incredible to see all the people on the track going crazy,” said Vettel. “It was the best lap I’ve ever done in Monza. Obviously it wasn’t the fastest, but it was definitely the best.” 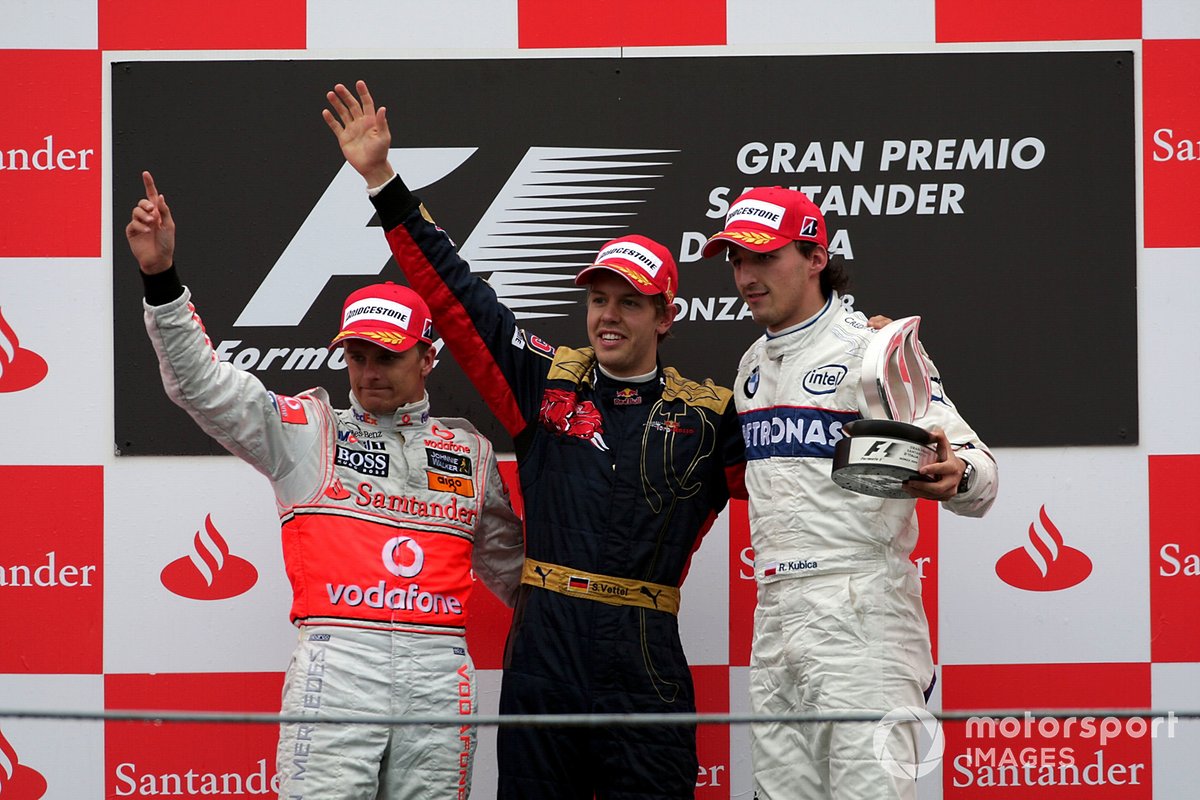 Vettel fought to hold back the tears as the German national anthem in his honor was first played across the F1 podium. It was a routine he had watched so many times as a child, enjoying the success of his hero, Schumacher. Today it was all for him.

Still, it was also a monumental day for Toro Rosso, a team that had emerged from the minnow Minardi operation less than three years earlier. Celebrating on the start/finish line below the podium, fans in Minardi attire howled and kissed the track. Their small team had won on home soil.

Although the Faenza team was due to take a second miracle win at Monza in 2020, under its AlphaTauri disguise courtesy of Pierre Gasly, a lot had changed by then. Back in 2008, it was still an incredibly small operation competing against manufacturers who release for free.

“Compared to BMW or McLaren-Mercedes or Ferrari, we don’t have that much manpower at home in the factory,” said Vettel. “We get a lot of help from Red Bull Technology, but we still have about 160 people working in Faenza. Everyone feels very special today and can feel very special.”

Monza would always hold a special place in Vettel’s heart because of that day in 2008. Ahead of the 2010 Abu Dhabi Championship race, Vettel’s race engineer Guillaume Rocquelin “Rocky” took a permanent marker and wrote “MONZA” in large letters on his balaclava. It was a reminder of what Vettel was capable of and would serve as a lucky charm for his first championship win, who would later be recalled with his helmet for the 2018 race.

Vettel’s F1 career looks set to end without adding to his run of 53 race wins, but where is Monza 2008? He admitted last week that it was “quite a luxury” to choose so many (only Hamilton and Schumacher have more wins) and that comparing was always difficult.

“But I would say the first one is very special,” said Vettel. “Also the circumstances: it was a bit of a miracle and fairytale, getting it together with a pole and then winning the race. So yes, it was very special.” 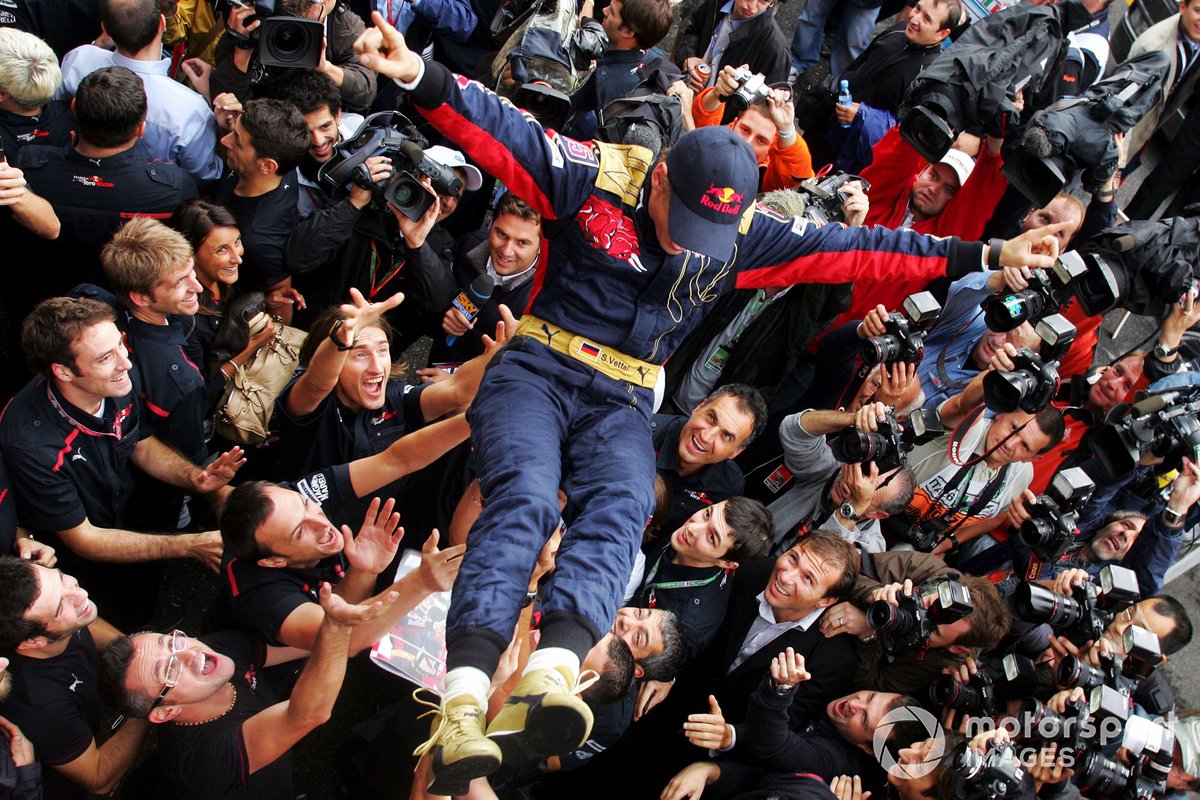 Looking back, Vettel describes his first win as “very special”