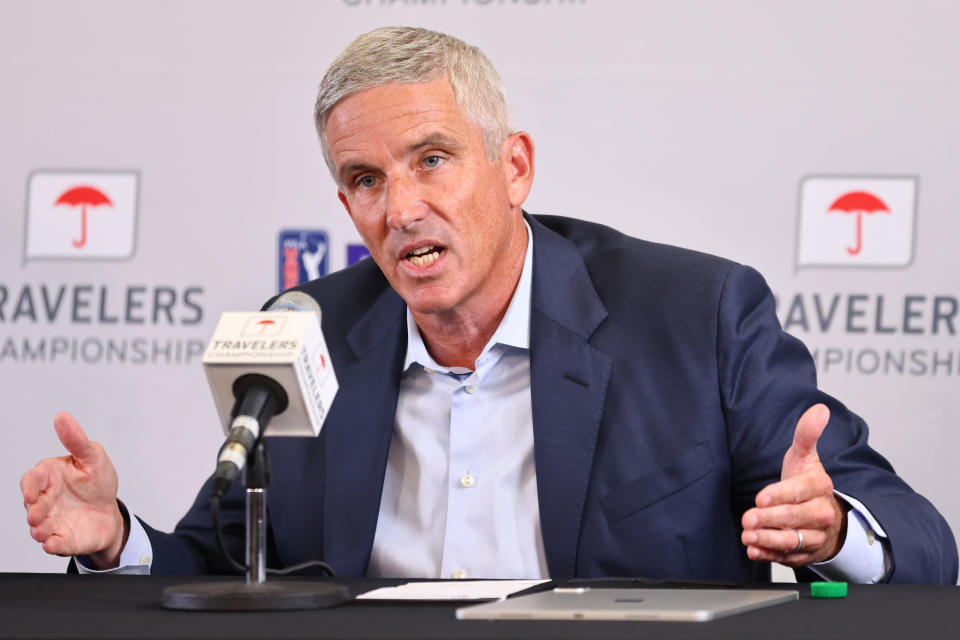 CROMWELL, Conn. – The Travelers Championship, with a date many would think would be among the worst on the PGA Tour schedule – the week after the US Open is a success that commissioner Jay Monahan loves to talk about. He knows the tournament well, having graduated from Trinity College, located just 11 miles from TPC River Highlands in Hartford. But on a soggy Wednesday afternoon, Monahan was in the media center to talk about something else: the threat the LIV Golf Series poses to the PGA Tour and what the Tour plans to do moving forward.

Turns out Monahan spoke for just over 40 minutes and outlined a new structure the PGA Tour plans to put in place soon.

Here are five key takeaways from his press conference.

Patrick Cantlay celebrates with Nikki Guidish and the FedEx Cup on the 18th green after winning the final round of the 2021 Tour Championship at East Lake Golf Club in Atlanta. (Photo: Kevin C. Cox/Getty Images)

At the end of this season, which culminates in the Tour Championship final round on August 28, players ranked No. 125 and higher on the FedEx Cup points list will qualify to compete in the first tournament of the FedEx Playoffs. Cup (the FedEx St. Jude Championship) and earn full PGA Tour exemptions for next season. But on Wednesday, Monahan announced the number would drop to 70 from 2023.

Golfers who don’t qualify for the FedEx Cup playoffs will need to earn their byes for next season by participating in a series of events in the fall.

Beginning in fall 2013, the PGA Tour adopted a wrap-around schedule that ended in late summer 2014, but Monahan announced Wednesday that the tour intended to return to a season based on the schedule in 2024. This means that the 2024 PGA Tour season will start in January and end in late August, which makes it more condensed.

The advantage of this system, especially for elite players, is that golfers can enjoy an off-season and not worry about returning to action in a weak FedEx Cup point position.

“Selfishly, for me, I would like an off-season,” Rory McIlroy said Wednesday. “I wish I didn’t show up in February and be 150th in the FedEx Cup points list because I just didn’t want to play in the fall and I wanted to take some time off and spend time with my family. .”

However, beginning in 2023, golfers who qualify for the second round of the FedEx Cup playoffs will also qualify for a new round of up to three international events held in the fall. These events are expected to be held in Asia, Europe and the Middle East and have prize money in the range of $20 million each.

Massive increase in the purse at eight events

Some of the highest-profile events on the PGA Tour will offer significantly more player prizes starting next season, including the Genesis Invitational, Arnold Palmer Invitational, WGC-Dell Technologies Match Play and Memorial Tournament. These events will grow from a total purse of $12 million to $20 million. The Sentry Champions Tournament will increase from $8.2 million to $15 million, the Players Championship will have a $25 million purse, and the FedEx St. Jude Invitational and BMW Championship will increase to $20 million.

“One of the things we’ve heard over the past few months from our sponsors is, ‘Please let us know what we can do to help you,'” Monahan said. the changes that we’re making, which will be about $45 million in additional purse, come from a combination of sponsors contributing, you know, ways to keep selling more within these events themselves, and our reservations.”

No free lunch on the PGA Tour

The LIV Golf Series hires players to compete in its events and then pays them more based on their performance and the performance of the team they play with that week. However, PGA Tour players make their money based on how well they finish this week’s tournament.

In recent weeks, there have been rumors that golfers going to the PGA Tour should be given a set amount at the start of the season to pay for things like travel and training. When asked about it, Monahan didn’t say it wasn’t on the table, but didn’t say it would happen soon.

For players joining the LIV series, there is no going back

Brooks Koepka attends the second round of the 2022 US Open in Brookline, Massachusetts. (Photo: John David Mercer-USA TODAY Sports)

On June 9, Monahan sent a letter to all PGA Tour members announcing that he had suspended all 17 members who played in the LIV Series event in London, including Phil Mickelson, Dustin Johnson and Sergio Garcia. This made them ineligible to compete in PGA Tour-sanctioned events.

As he spoke, LIV Golf took to social media to announce that Brooks Koepka has joined the organization, confirming speculation and reports that began circulating on Tuesday.

“I laid out on June 9 our position on the players who had signed up for this first event, virtually all of whom have made long-term commitments to play in this series,” Monahan said when asked if he would. he was planning a lane for LIV Golf. participants to return to the PGA Tour. “So one event has been played, more are to come, and I think our position there is very well established in terms of all the players who are going to play in future events.”

Frankly speaking, golfers who leave the PGA Tour and play LIV Series events have no turning back.