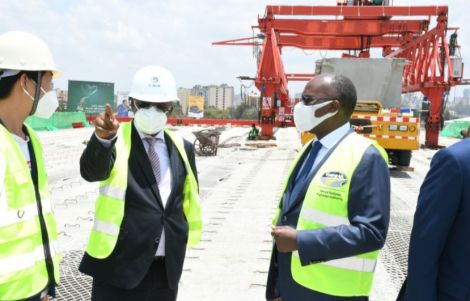 Frequent water shortages in Nairobi, caused by an interruption in supply, have not spared even the most powerful office in the country – the State House.

The Nairobi Water and Sewerage Company has listed the State House among the areas that will be affected by the interruption of the water supply.

An equally powerful office – the Department of Defense (DoD) headquarters, which houses the leaders of the Kenyan Defense Forces, is also affected.

“The shutdown will facilitate the repair of the Sasumua treated water transport pipeline in the Aberdare Forest and the interconnection of the outlet pipes from the Kabete reservoirs with the distribution pipeline moved along the Waiyaki Way at the headquarters of communication authority due to the ongoing construction of Waiyaki Way – Rironi Road.

“Once the works are completed, this will allow the release of the road section between the headquarters of the Communication Authority and the junction of James Gichuru and Waiyaki Way to Waiyaki Way – Rironi Road Contractor,” said the opinion of Nairobi Water.

Other areas of Nairobi that will be affected by water scarcity include;

Nairobi Water has called on affected customers to use available water sparingly as they work to restore supply.

Many households in the city have been the hardest hit by heavy infrastructure projects undertaken by the national government in Nairobi.

Some of the worst affected areas include Waiyaki Way, Mombasa Road, and those with water pipelines built along these roads.

Mombasa road users suffered disruptions due to the construction of the Ksh 60 billion Nairobi highway.

Some locals have complained that their taps have been dry for months.

Documents tabled in Parliament show that Ksh 2.1 billion will be used to move water and sewerage pipes along the multibillion project.

The relocation of utility poles has also caused frequent power outages in housing estates along the road.

Transport CS James Macharia during an inspection visit of the Nairobi highway on March 31, 2021.

READ  Adapting to the Rhythm: One Year of MIQ in New Zealand