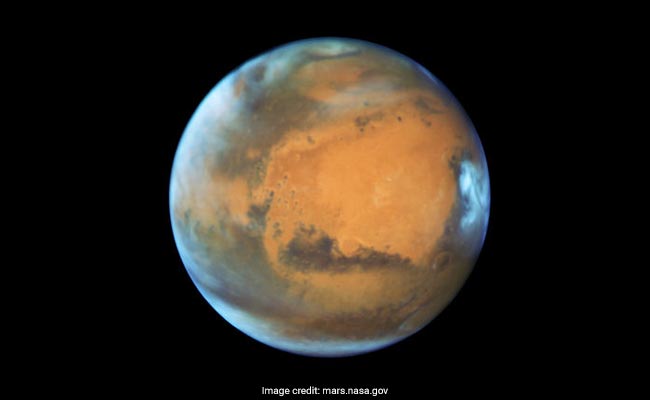 Mars’ atmosphere is only about 1 percent thicker than Earth’s

NASA’s InSight lander has detected a meteoroid impacting the surface of Mars. It is the first time that the space agency has recorded both seismic and acoustic waves from an impact on Mars. Researchers shared findings about the new craters in a study published in Nature Geoscience. InSight landed on the Red Planet in 2018 and since then it has been experiencing waves for the first time.

According to the study, the meteoroid fell 53 to 180 miles (85 to 290 kilometers) from InSight’s position in Mars’ Elysium Planitia. It hit the atmosphere of Mars on September 5, 2021 and exploded into three shards, each of which left a crater on the surface of the Red planet.

The researchers used observations from NASA’s Mars Reconnaissance Orbiter in space to confirm the crater’s location. “These seismic measurements give us a completely new tool for exploring Mars, or any planet we could land a seismometer on,” planetary geophysicist Bruce Banerdt of NASA’s Jet Propulsion Laboratory, the principal investigator on the InSight mission, told news agency Reuters.

NASA also released an image of the meteoroid impact on Mars on Monday. In the audio, you’ll hear three “bloops” representing different moments of the impact: the meteoroid entering the Martian atmosphere, exploding into pieces and hitting the ground. The peculiar sound is caused by an atmospheric effect that has also been observed in deserts on Earth, where lower tones arrive before highs.

Brown University planetary scientist Ingrid Daubar, co-author of the study, said: “We can match a known source type, location and size to what the seismic signal looks like. We can apply this information to InSight’s entire catalog of seismic events, and use the results on other planets and moons as well.”

The researchers believe that now that the seismic signature of such effects has been discovered, they expect to find more in InSight’s data, which dates back to 2018, Reuters reported.

“The moon is also a target for future detection of meteor impacts,” said planetary scientist and lead researcher Raphael Garcia of the University of Toulouse’s ISAE-SUPAERO Institute for Aeronautics and Space.

“And it may be that the same sensors will do, as InSight’s spare sensors are currently integrated into the Farside Seismic Suite instrument for a flight to the moon in 2025,” Garcia added, citing an instrument located nearby. from the moon’s south pole on the side of the moon that is permanently away from Earth.

Mars is about twice as likely as Earth to have its atmosphere hit by a meteoroid — the name for a space rock before it hits the surface. However, Earth has a much thicker atmosphere that protects the planet.

“So meteoroids usually disintegrate and disintegrate in the Earth’s atmosphere, forming fireballs that only rarely reach the surface to form a crater. Compared to Mars, hundreds form somewhere on the planet’s surface every year. impact craters,” Daubar said.

Mars’ atmosphere is only about 1 percent as thick as Earth’s. The asteroid belt, an abundant source of space rocks, is located between Mars and Jupiter.

InSight’s scientific goals prior to the mission were to investigate Mars’ internal structure and processes, as well as study seismicity and meteorite impacts.

InSight’s seismometer instrument determined that Mars is seismically active, detecting more than 1,300 Marsquakes. In research published last year, seismic waves detected by InSight have helped decipher Mars’ internal structure, including the first estimates of the size of its large liquid metallic core, the thickness of its crust and the nature of its mantle. .

Russian elites increasingly speak out against the war in Ukraine